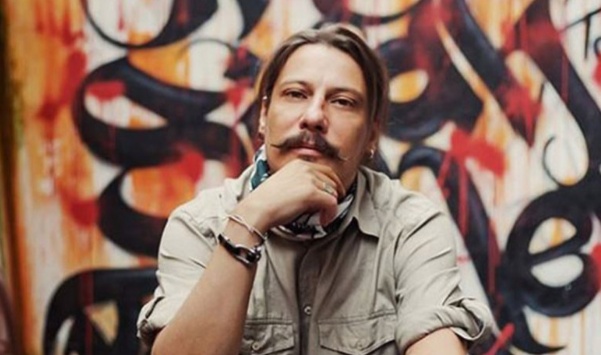 At 10 PM on July 7th, we received an urgent message: Erk Acerer, a journalist based in Berlin, was attacked by armed men at his home.

At 9: 56 PM , Erk shared on his Twitter account a photo showing the wounds to his head and face. “I was attacked  at home, with a knife and several blows.” We learned a few minutes later, again though his tweets, that he was heading toward the hostpiral “I know who my assailants are” he said in the spur of the moment, “I will never yield before fascism!” Later he informed that he had been admitted and kept under observation at the hospital, but that luckily there were no life-threatening wounds.

Born in 1973 in Istanbul, Erk Acerer has worked for a number of newspapers and media, and pursues his journalistic activity in Germany for Taz, Birgün, ArtıTV…He is also the author of a dozen books and his work received several prizes, notably the Metin Göktepe journalism prize and the Musa Anter prize…You will have understood that Erk is a seasoned journalist, who speaks openly of his opposition to the Turkish regime.

Today, Erk made a video declaration on his Twitter account, along with a few lines: “This is my communique to public opinion, to the media and to my journalist friends: Know that we will keep on asking for accounts to be rendered, and know also that we will be the ones who will close the accounts!”

A translation of the video follows:

My face has changed a bit, but I’m told this will pass. I have just come back from the hospital. Since there was suspicion of a skull fracture, I was kept under observation, but my condition is not serious, despite the concerns. I was attacked by three armed men in the courtyard of the building where I live. One of the assailants hollered “man, you won’t write any more!” As the number of witnesses was increasing during the incident, they could not make use of their weapons. This is evidence that everything we write and say concerning the fascist, islamist AKP-MHP power is true. It is a demonstration,  the resulting proof. As to the assailants, I of course have an idea and information. Security forces told me “for a few days, do not divulge names of individuals or groups, the circle will widen and our work will be more complicated.” But the answer to the question “Where are the 10 thousand dollars?” is precisely there. 1In June, following declarations by mafia chief Sedat Peker, the Minister of the Interior Süleyman Soylu revealed in a television interview that a politician had been receiving $ 10 000 a months from Peker, without mentioning the person’s name. This led to many polemical reactions, all the way to the Turkish Parliament. The arms merchants who stole public property are right beside us.

I must say they haven’t understood a thing. When we took to the road, it was not so that we could live quietly ourselves, but so our children could be in peace. This is why we are journalists. Know that, as far as I can, I will not let myself by dispossessed of Berkin Elvan‘s cause 215 year old child who died after 269 in a coma following wounds inflicted by the police during the wave of protests, one year after the Gezi Resistance of June 2013 nor that of Nihat Kazanan 312 year old child killed by Turkish security forces in Cizre in 2015…You created a country where children cannot sleep, are cold and go hungry. We have reached a point where we are ashamed to tuck in our own sleeping children.

I consider as a debt the thanks yous from my dear friends, readers and family. I will try to answer all messages as best I can.

This attack is not an isolated case. Moreoever, it “targeted” a demanding journalist. It could be classified under the heading of “Turkish State external actions”, targeted assassinations or attempts, just like those that were examined during the International session of the People’s Tribunal in Paris in 2018. The personality and tenaciy of a journalist such as Erk Acerer lead us to think so. Seeing it as nothing but an incident, a tantrum by disgruntled grey wolves, would be beside the point

Because this attack occurs precisely while the settling of internal accounts plays out in Turkey, concerning the beneficiaries of corruption and the role of some mafias allied with the reigning power. Mafiosi Sedat Peker clearly has more than one file in hand that leads all the way back to the Reis. And we already know that all this rests on the questioning of the ultra-nationalist wing in Turkey, to the political solidity on which Erdoğan can rely, and thus, of all of their own future in the alliance.

One only has to note how the regime is going in circles in the procedure to prohibit the HDP and how, for its own part, the MHP settles matters directly though assassinations to understand there are a few disagreements when it comes to methods. For example, embarrassing the German Chancellorship with a targeted attack against a journalist of the Turkish opposition at a time when Turco-German relationships are rather on the upswing, is an aspect of such disagreements.

And if some might have thought that all this was a matter of complementarity in styles, would be quite mistaken as to the gravity of the crisis affecting the regime.

Following the reactions of the German authorities should prove interesting, as they go through their own period of change, even if we already know that the compass will keep “migrants” at the core of issues.

We send Erk Acerer all our wishes for a speedy recovery  of course, and our full support in his fight for the truth…