Nûdem Durak and the others, still detained in Turkey 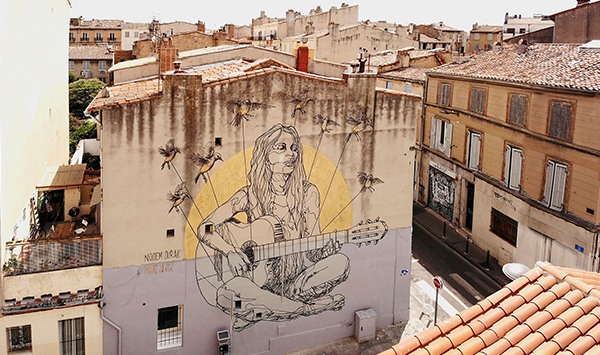 Close to a year has gone by since Kedistan joined the solidarity campaign “Free Nûdem Durak”. It was only logical for us to take part in this re-launching of a solidarity movement for Turkey’s political prisoners.

The name “Nûdem Durak“ first appeared before our eyes as we began the translation of a clandestine newspaper, conceived and realized among co-detainees inside the prison of Mardin in 2016. Our friend Zehra Doğan was detained there at the time and took the lead in realizing this “Özgür Gündem – Gaol” edition. Nûdem Durak provided a few articles to it.

You can imagine our emotion when this manuscript, done on wrapping paper, came into our hands. The two original editions are now on public view whenever Zehra holds an exhibition. This will again be the case in Berlin, starting on February 26 at the Maxime Gorki Theater.

Our first meeting with Nûdem Durak dates back to the time when we set to work with others in translating in French these pages, testimonials to the resistance of women imprisoned in Turkey.

But did we really need to justify this commitment anew?

As Joseph Andras and Kaoutar Harchi wrote so well in a recent article in Regards “(…) Nûdem Durak is just one captive among so many others. We should then speak of every one of them, spell out their names, one after the other, relate the slightest tale, describe all the families; we should not condemn a single condemned one to the darkness already embracing him or her. Except it so happened that one person, suddenly in the spotlight, allows us to grasp the totality. Large numbers slide off us: lists reveal dictatorship but they fail to reach the heart. And to arouse bodies accordingly. So let us say Nûdem Durak in order to say in the same breath the names of all the detainees: writer Ahmet Altan, journalist Nedim Türfent, former elected one Leyla Güven, HDP activitists, homosexual students or political leaders Selahattin Demirtaş and Abdullah Öcalan(…)”.

Following on the solidarity campaigns surrounding the name of writer Aslı Erdoğan, that of artist and journalist Zehra Doğan, that of a third woman, singer and musician Nûdem Durak, was a must.

Sentenced to 19 years in prison, she has been incarcerated for 6 years already. Of course, during the first 5 years, artists and musicians here and there started supporting her by singing in her name, dedicating their concerts to her. A few television stations did a “topic” on her.

In 2020, after a few articles spoke about Nûdem in the French press, a small collective of personalities took up the relay around writer Carmen Castillo who accepted to be its godmother. Through word of mouth, both locally and internationally, famous names and unknown ones of authors, artists, movie directors, sent various messages of support.

You will find these names and messages on the two instruments providing accounts to “Free Nûdem Durak”, on Facebook, Twitter, Instagram, and YouTube… (Please join their lists of subscribers, if you are one of those who use these platforms).

This is how a halo of support built up around Nûdem over the years.

As such, this is already a guarantee providing her with a bit of protection. All the detainees testify to the importance of this halo, and of the correspondence it produces, both for the person and for her co-detainees. Associations such as Amnesty and others have made this their practice. During Zehra Doğan’s imprisonment, we served as an impulse to the sending of letters and of cards, which is ongoing, beyond her liberation, with her ex-codetainees.

This may seem laughable against a totalitarian State. But it is a weapon which allows to informe, to link, to provide comfort to the detainees and to their families and loved ones. The same holds true for those “names” that serve as protective umbrellas.

Because railing against Erdoğan’s repression or claiming to be more Kurdish than a Kurd once a month, be it for Nûdem or the others, is not enough, there is the need to keep up these links, to keep the flame of solidarity alive. A huge thank you to those who have done so for the past year.

So this is what the handful of volunteers of “Free Nûdem Durak” have done during this year where the pandemic considerably reduced opportunities for meetings, concerts, and moving around.

Added to these difficulties the tangible hardening, if such a thing were still possible, of the regime in Turkey and its ongoing policy of criminalizing the Kurds. Obtaining a liberation unde these conditions would be an exploit, especially since many of the legal “appeals” and other means will soon be exhausted faced with a justice responding to regime orders. Even when faced with “binding” decisions from the European Court of Justice, the Turkish regime lends a deaf ear or finds subterfuges. This is the case for two emblematic “hostages”: Osman Kavala et Selahattin Demirtaş. And attacks are underway by the regime against the Kurdish movement and its political representatives in the opposition, tending toward their total prohibition.

So Nûdem, decked out with the designation of “terrorist” because she sang in Kurdish, is but one among tens of thousands of other files.

And it is precisely so as not to forget this file, while pointing out and denouncing the importance of this pile, that the solidarity campaign must go on and grow. In order to support Nûdem, but also to describe this totalitarian situation, and support all the others.

We are calling on those of our readers who are also authors, journalists, artists, poets so they will add their contribution, in their own way, according to the place from which they speak, sing, write, create… All ideas are welcome. Send them to the small existing team via the Twitter or Facebook accounts “Free Nûdem Durak” or, if you are allergic to social media, to us, Kedistan magazine, associated with this solidarity campaign. We will transmit them and reaffirm by the same token the initial commitment of a year ago, from the entire Kedistan team.

And if, through this outlet, we made it possible to convey the understanding that this is not only about giving back a free voice to Nûdem, but also raising awareness over the fact that the repressive and bellicose policy of the regime in Turkey has, and will continue to have, de facto repercussions in Europe, be it through geopolitical destabilizations or directly through the interference of its affiliated groups, this would also be a step forward.

For what we are talking about is of a certain fascism. The existing one and that which could follow, the one cultivating the other. And if the cures to this political pandemic are hard to put in place, humanism would at least provide a good starting point.