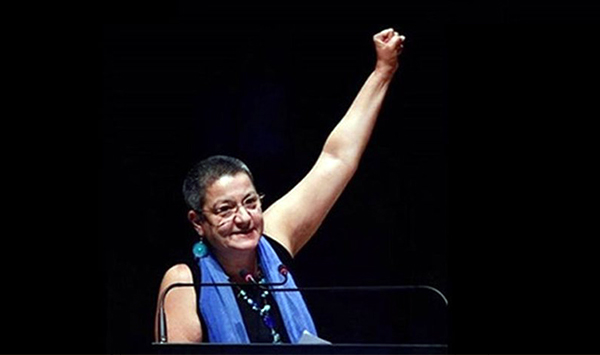 The President of Turkey’s Union of Medical Doctors (TTB) Şebnem Korur Fincancı will be before the judges of Istanbul’s 42nd tribunal on February 16 2021 at 12h00, this time for her ‘sharing’s on social media. This is the decisive hearing.

As a reminder, Şebnem Korur Fincancı is among the people relentlessly pursued notably for taking part in the campaign “Chief editors on duty” for the newspaper Özgür Gündem, since prohibited and shut down by decree. Şebnem Korur Fincancı, Erol Önderoğlu, representing Reporters without borders (RSF) in Turkey and the writer Ahmet Nesin have already been acquitted by the local court in the trial opened against them. After annulling the recent acquittals, the Court of Appeals has decided to judge them again in the Özgür Gündem trial. On February 3rd last, the first hearing opened before the 13th Penal Court in Çağlayan.

On February 12, in a written press release, leaders of the Turkish Foundation for Human Rights (TIHV) called on solidarity with Şebnem Korur Fincancı who is the former Co-President of the organization. They also announced that “the organization will be present at the hearing and will hold a press conference at 11h00 in front of the Court building.”

Excerpts from the press release:

Şebnem Korur Fincancı is a determined defendor of human rights, an excellent medical doctor and scientist.

Using all of her knowledge, she has proceeded to an objective and scientific criticism of the practices of those holding political power, in the area of human rights and health, attempted to bring to light and to prevent violations of rights, and fought in particular against torture, ill treament and impunity.

In the same way as her work met with much success during her presidency of the TIHV, she is now attempting to protect the health and the rights of society as President of the Central Council of the Union of medical doctors of Turkey.

Because of these activities she has been the subject of numerous judicial attacks, prosecuted, arrested. One trial opened against her for items she shared on social media is now reaching its culmination.

The defense of human rights, the voice of conscience which is the sole witness to reality, confirms reality and resists before tyranny in order to bring it to light, cannot be punished.

We are by Şebnem Korur Fincancı’s side!

Those in power in Turkey are worried by the protests that are ongoing despite the repression. The current mobilization among young university students during the pandemic, and on a background of economic crises, does nothing to make improve matters for them. This is why repression is ongoing. The AKP/MHP tandem reigning as a cartel surrounding the President is permanently searching for fresh “news” in order to keep the upper hand, such as demonstrated by the far-out debates on relaunching Turkey’s space conquest, or, more seriously, opening new constitutional reforms before the next elections, while awaiting to discover how relations will play out with the elected American President.

At a time when those in power sense they will have problems in winning by plebiscite, police and judiciary machinery pursue their attacks against the opposition. This misuse of justice, invalidating pronounced acquittals and refusing to acknowledge international decisions calling for the liberation of personalities such as Osman Kavala or Selahattin Demirtaş, demonstrates a toughening of Turkish autocratic power, taking large advantage of European political cowardice.

This does not augur well for Şebnem Korur Fincancı.

Şebnem Korur Fincancı, is one of the three women featured in this documentary. (Trailer in Italian)