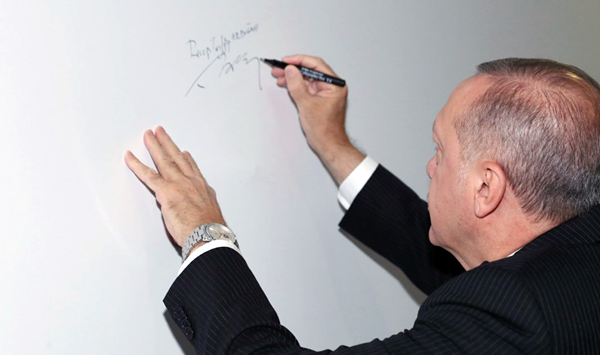 For the last few weeks, Erdoğan has been sketching out the idea of a new constitutional reform for Turkey…

Outside the constant need to saturate the political and media space, Erdoğan now measures the difficulties he may encounter with the MHP/AKP tandem should it only remain a governmental cartel, while an electoral base frays under the economic crisis, the approximate responses to the COVID-19 pandemic and the poverty engendered by these combined elements.

President Erdoğan also needs to test the interior policial climate and to influence the calendar in his favor, while maintaining the police and justice stranglehold, and even increasing the repression against the Peoples’ Democratic Party (HDP) and its supporters. Searching for a “national alliance” for a new constitution opens up such a space. Even more surely than does the new space program itself.

Up until now, the main opposition party in Turkey, the Republican Party (CHP), has only expressed a purely verbal and politician opposition, as has the Good Party (IYI).

On the exterior, Erdoğan’s diatribes directed against the European Union, and France in particular, have become less frequent. In the name of Turkey as member of NATO, he has even expressed personal reassurances on the use of the S-400 acquired from Russia, proposing a “peace offer” on the topic, also valid for the new American administration. He has stepped back on the “gas” in the Mediterranean and accepted “negotiations”. On the financial level, he has also reiterated “being open” to new European investments, once the crisis ends, taking advantage of Germany’s wish to maintain and develop economic relations.

If he is maintaining his will to “fight terrorism to the end”, meaning fighting the influence of the Kurdish movement on the domestic as well as on the exterior scene, the offensive he had recently proclaimed against different parts of Kurdistan in Syria and in Irak is currently suspended on future relations with the new American President. This does not lead to a cessation of the bombings nor to backroom dealings in order to prepare future moves. The display of aggressive nationalist militarism is domestically an indispensable political guarantee for the alliance in power, reaching into what is always called the “deep State”. And when these bombings cause “Turkish” victims, he goes so far as to set up “the execution of hostages by Kurdish terrorists” in order to obtain fresh international condemnation of the PKK, useful for another step forward in Irak. This display of agressive nationalist militarism is also an indispensable political guarantee domestically for the alliance in power extending to what is always called the “deep State”. It also serves to stay on the right side of a vast section of the CHP, always prompt to react “in défense of Turkish soldiers”.

In early February, Erdoğan thus declared he could envisage launching a project for “a new constitution”. He appealed to all political parties, asking them to unite at the national level in order to work at the re-writing of the New Charter for Turkey.

However, he knows full well that without a good section of the opposition, such a project would fail through parliamentary channels, even in the current pretence of what serves as a Parliament. And using the referendum route is just as risky in the circumstances.

Sezin Öney, a journalist at Duvar, noted with pertinence:

“Currently, only 584 of the 600 seats in the Grand national Assembly are occupied because some pro-Kurdish parliamentarians of the People’s Democratic Party (HDP) were stripped of their immunity and imprisonned. The AKP and is coalition ally, the Nationalist Action Party (MHP), hold 337 seats in total, and 360 seats are required in order to hold a constitutional referendum. In order to legislate on a new constitution without a referendum, the approval of 400 parliamentarians is required.”

As does this journalist, we ponder the way Erdoğan will “clothe” a project he intends custom designed for himself. “Simple”, answers Sezin Öney: “by calling again and agin on the good old efficient methods”, (in Turkey as elsewhere), “nationalism and conservatism”, which she qualifies as “ideological miracle workers”

We can translate this as “Turcity and reactionary social withdrawals” and we will know which electoral customers Erdoğan is addressing, and which political machineries will follow in his footsteps.

If, for Erdoğan, “European modernity” is in the example of Hungary or of Poland, one can easily guess the workings of the future wrappings around the “constitutional project”.

Articulated with this vision: the refusal to see Turkey continue to align itself on “external” decisions of justice. Freeing itself of the European Court of which Turkey is however a guarantor. Don’t Poland and Hungary lead the way? And these “constraining conventions” such as the Istanbul Convention, also signed by Turkey? Recently, this Convention from the Council of Europe dealing with the prevention and the fight against violence toward women and domestic violence, has been violently targeted.

“(…) As in Poland, the AKP government has started using the LGBTI+ community as a scapegoat, exponentially since last summer. The AKP has pleaded for the withdrawal from the Istanbul Convention because it denigrates ‘family values’ by supporting the rights of LGBTI+ (…). Today, the LGBTI+ scapegoat is back in Turkey with the recent demonstrations at Bogaziçi University. The community is labelled as ‘terrorist groups’…”

“(…) Will Turkey go as far as Poland by declaring LGBT-free zones? This question is still unresolved, but it is more than likely that the AKP will choose to renew the ‘new constitution’ from the angle of protecting the family and religious values, as well as defending Turkish nationalism. Hungary did so successfully in 2010. It’s shiny new constitution became effective in the beginning of 2011…”

Observing the way in which answers are formulated from the depths of the mafia-inspired State to the leaders of the coalition in power, and the feebleness of the reactions from the official opposition, often more preoccupied by launching its new protégé, the mayor of Istanbul – a moralist from every angle – one can fear indeed that this sugar icing will attract the ants.

A constitution founded on “family and religious values”, stitched onto a judicial framework resting on Turcity, and confirming the Presidential status, will be hard to argue against as such by a Kemalist opposition.

It would be just as difficult for the “European partner” to contest what would be a deepening of theocracy and despotism when it cannot even do so in its midst.

The ‘political evolutions” within the European States are just as imprinted with these same criteria of nationalist withdrawal, the famous “national sovereignty”, by the “societal right wings” – as reactionary as can be – both functioning against, yet allied to a liberalism described as “globalist”.

Soon, it will be impossible to determine who, of Turkey or of the rising European right extremism, first initiated these eggs of “returning fascism”. But the mechanisms for brooding them are sickenly familiar.