Turkey and the Istanbul Convention – In or Out? 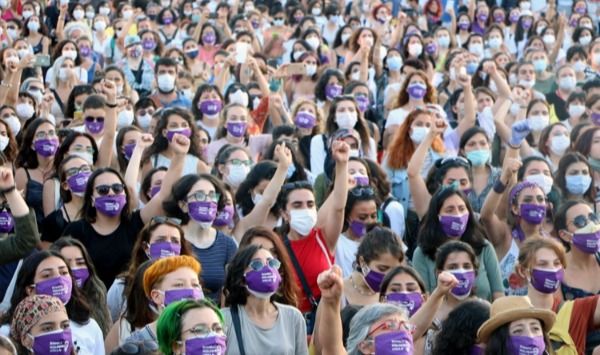 August 13. Is Turkey leaving the Istanbul Convention? Or not? We await the decision that had been announced for today.

Seeing all these women of every age and every condition filling the streets and squares in order to protest, seeing the police beating on this massed force, howling, hitting, dragging by the hair, arresting, while reading and listening to the warnings of the ones, and the declarations and insufferable speeches of the others dripping with sexism and contempt, I reel from anger to laughter, from enthusiasm to despair.

On the whole, the women are saying “it will take more than this to beat us down and kill us”, and the others answer “oh yessss!”

I also love this: on the one hand, Poland is pointed out for x reasons for its fascistic and reactionary leaders having quit the convention , and on the other hand Poland is presented as an example…“You see, even Poland has done it; and yet, it’s a European country.”

Still, there is something historic going on! I have the feeling that our Reis has made a big mistake in his career. Bowing to the pressures from the most bigotted and fundamentalist religious “brotherhoods”, not only has he caused divisions within his own camp, but he has also pushed women on every side to assemble under a common denominator. To think I would find myself some day on the same ranks as women who support the Reis and who usually support him and spread his ideology about women for whom the foremost aim must be motherhood…I would never have thought to live to see such a day!

And you have mad dog politicians and others who call themselves journalists, analysts, specialist who gladly go so far as to call women who struggle “prostitutes”. Combining incomprehension and bad faith, they take issue with the principle according to which “the women’s declaration must always be given primordial consideration” as if through this principle coming from a women’s mouth a man would automatically be condemned without due process. Yet, this principle is useful rather when taking into account complaints lodged by women and making their recording mandatory. Also very useful, when one knows that, in fact, very few women dare approach security and judicial authorities where they are met with “well-meaning” advice suggesting that they “go home”, that they “resolve the issue within the family” and – no doubt influenced by what they experience in their own home, specify that “the husband can hit as well as he can caress”…

With this principle, men would be wronged. Concern is expressed for those who are hit by their wives. I wonder how many such cases exist in this edifying era of feminicides and violence. There is concern for men in Turkey against which jealous women, filled with the desire to be harmful, would make false declarations. Apparently, woman is the devil incarnate! There is talk of men made destitute by a lifetime of indemnities. This is not even mentioned in the convention. In short, there is much concern for the men. A topsy-turvy world.

These hairy men also wax indignant over paragaph f of article 3 in the convention which states that “the word ‘woman’ includes girls of less than 18 years”. This would be contrary to our culture! Yet, the same ones declare in their sermons and fatwas, and even through the mouth of the Diyanet, (“religious affairs” being worthy of a ministry) that girls can be married starting at 9 years of age! You have to make up your mind. Frankly, they seem to be made out of teflon, nothing sticks, one day they say white, the next day they say black, they wear reversible suits and go with whatever is convenient.

Obviously, this concention does not intend to “harm the integrity of the family” as claimed by its opponents. Speaking of the “family” which is supposedly “sacred” I ask you of what sanctification we can speak when a family contains violence in its midst? Is it possible to maintain “the integrity of the family” by making the mention of this violence tabu, by letting it grow and spread, and by abandoning the victims in a patriarchal and macho system, on the altar of physical, sexual, psychological, economic violence?

Obviously the State has the responsibility and the duty to stop the violence, to protect its victims, whatever their gender, and to punish the authors.

The fact that the Istanbul Convention for the protection of women deletes the obligation of marriage and speaks of the “sharing of the same home” is interpreted as “outside our traditions and culture”. This is understandable from the pro-Reis supporters considering their bigotted social vision… The text which insists on numerous occasions on man-woman equality and speaks in particular of social gendering, a first in Turkey, has many offended who do not consider women as persons, and even less of different genders. Thus, the mortal fear: “They are going to transform our Nation into homos and trans”. As if Turkey respected the very letter of every treaty it has signed and as if this one imposes homosexuality on heterosexuals, because their State has ratified it. What hogwash!

There are those who say “The majority of Turks do not want this convention”. Yet a survey done in August 2020 reveals that 63,6 percent of society wishes that Turkey maintain its place in it. There are those who say “men are condemned unjustly”. No, men are the ones who think they have the right to exercise violence, who think they are punished unjustly when they do so. That is not quite the same thing… Ah, there are also those who howl “this convention was prepared by enemy outside forces”. Ah! Those enemies from the outside that keep cropping up! Yet, the Istanbul Convention is a treaty emanating from the European Council, of which Turkey is a founding member. Turkey was initiator and first signatoree of this text which was prepared cooperatively by all civilian organizations working in the field of women’s rights in Turkey, and monitored by Mevlüt Çavuşoğlu in person, a founding member of the AKP, deputy and minister during the period of its elaboration…True, we were being sold on entry into Europe, in those days.

In fact, the Istanbul Convention simply provides a legal framewhork so that the signatoree States may implement adequate measures. Thus, in and of itself, it does not solve problems of violence. Obviously, such measures and provisions are largely insufficient in Turkey. Withdrawing from this convention would strongly influence social dynamics and provoke the total disintegration of an already shaky equilibrium, throwing into the balance the reinforcement of a certain conservative majority… that votes.

This is why women are rushing onto public squares these days in many towns in Turkey, in order to say “We are not afraid. We will not be silent. We will protect our gains.”

Update of August 13, in the evening…

In a speech on 13 August, the Reis signalled the government’s intention to withdraw from the Istanbul Convention. He said, “an understanding, regulation or ideology that places dynamite on the foundation of the family is not legitimate,” and then added, “Turkey must draft such treaties itself, rather than using ‘translated texts’.”

Well, I have no more saliva…

He did not fail to criticise pro-government Islamist columnist Abdurrahman Dilipak – without mentioning his name – in his article entitled “The AKP daisies” published in late July in Yeni Akit, in which the author describes women fighting for their rights as “prostitutes”.

Our offended Reis, specifies that “the AKP will never remain silent in the face of such ‘irreverence’ targeting the women of the party” and claims “In the name of all my (my?) female branches and all women, I condemn these columnists who use an insult that I refrain from saying and who describe the women of the AKP as ‘daisies’…”.
Yet an AKP minister, who said worse than ‘daisy’, “The Turkish woman is the decoration of her house“

Izmir, a few days ago…