Conscripts killed because they were Kurds, Alevis, Armenians… 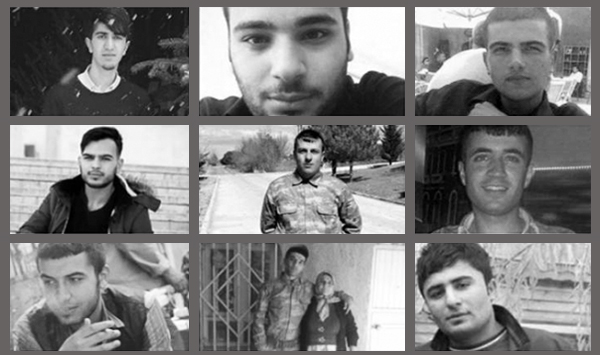 Following several recent suspicious deaths of draftees in army barracks, army and Turkish gendarmerie conscripts subjected to violence leading all the way to murder is once again in the news.

Efforts by the authorities to cover up the suspicious nature of these deaths by presenting thems as “suicides”, “accidents” due to a lost bullet, or again as “sudden heart attacks” do not convince the families nor a part of public opinion. In fact, such cases have existed for a number of years and increase during tense periods such as today’s, periods marked by the polarization within society, by an outrageous nationalism and racism. Discrimination has shot up in recent years and is at the origin of these recurring deaths.

“Happy is he who calls himself a Turk”

Providing exact figures is almost impossible because even organizations in civilian society and those dealing with conscientious objectors have trouble obtaining and listing these cases in an adequate way.

The last available official figures date back to the period running from 1992 to 2002 and reveal that 2 220 suspicious deaths of conscripts were recorded… as “suicides”. Beginning in 2002, at the start of Erdoğan and the AKP’s “reign”, the number of deaths in barracks was unofficially on the rise but the official records are silent. No inquiries take place, family’s requests are not followed up, lost in the labyrinths between justice and a bureaucracy controlled by those in power. Everything is done to keep these deaths unnoticed. Nothing remains other than the testimonies by relatives brave enough to speak up before the media and by elected members attempting to bring up the matter in the Turkish Parliament

According the the Association for the victims of suspicious deaths in the military (Askeri Şüpheli Ölümler ve Mağdurları Derneği),, and according to information collected in the media and in questions raised in Parliament, these cases numbered 69 in 2012, 59 in 2013, 43 in 2014 and 13 in 2015.

A few examples among so many others…

Following the death of Yılmaz Köse announced by the Turkish Armed Forces as a “suicide”, an appeal was made by the family to the European Court of Human Rights (ECHR) and received a favorable response on April 1st 2014; Turkey was condemned to paying indemnities to his parents. Even if, according to this decision, Yılmaz’ life was valued at the modest amount of 10 000 €, the fact that Turkey’s guilt was recognized in the violation of the right to life, according to article 2 of the European Convention, marked an important point.

On January 24 2017, the ECHR reached a similar decision in the case of Davut Cengiz, a youth from Diyarbakır. This time the indemnity was set at 15 000 €.

On October 20 2018, in the Orbay barracks of Sarıkamış in Kars, a young conscript was mortally wounded to the head by a bullet shot by his colleague. According to the authorities “they were teasing one another.”

On October 26 2018, Ahmet Çevik, the lawyer for the Association of victims of suspicious deaths in the military, referred back to the “suicides” of Ömer Faruk Demirkol, a soldier at the gendarmerie station in Islahiye qnd of Mehmet Boztepe, a young conscript from Urfa, affected in Ankara. He also drew attention to the fact that all judicial proceedings concerning susupicious deaths in barracks are dismissed and reiterated the need for the recognition to a “right to conscientious objection”.

On March 6 2019 in Silopi, Şırnak, district, Uğur Çakmak lost his life while he was on guard. Another “accidental” death caused by “a bullet from a colleague”. As was the case for Muhammed Altuğ, a conscript in Lice, Diyarbakır district, killed “accidentally” on June 25 2019, five days before the end of his tour of duty, again by another soldier…

As the Turkish Army is totally closed to dealings with the outside world, one can easily estimate that such cases occur much more often than the ones reported in the media.

It is no accident if the soldiers thus losing their lives are almost always Kurds, Alevis, Armenians or members of other oppressed and discriminated minorities, within a monistic Turkey where “happy is he who calls himself a Turk”.

If you speak in Kurdish, you are a terrorist 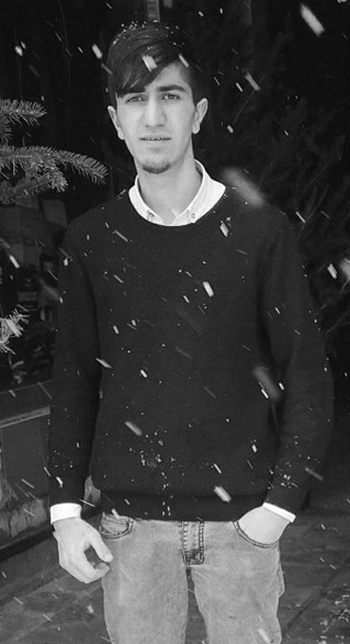 One of the latest recent cases involves a young Kurd, Osman Özçalımlı a conscript gendarme for barely a month, affected to the Aliağa prison in Izmir. Osman lost his life in murky circumstances, shortly after calling his father on the phone a number of times, and telling him “they’re after me, they call me a traitor to the Fatherland, I’m being threatened.” His father managed to reach Osman’s superior at the barracks, to convey his concerns about his son. The military man reassured the father “we have solved the problem.” Problem solved nonethess by the son’s death on the following day… The declarations of the young man’s superiors to the family are disjointed and conflicting. The cause of death is given once as a heart attack, another time as defenestration, or yet again as “Osman may have fallen and struck his head”, as told to the father by one of the superiors… The parents are first informed of a hospitalization following a fainting spell, then of their son’s death, following which they are advised to declare a heart attack so as not to raise protests in the native village.

“I spoke to my son in Kurdish over the phone several times, he then was threatened, and was treated as a terrorist”, says Osman’s father. In a few words, this sentence lays out the full scale of the true situation.

For militarism, the essential thing is to fabricate enemies, a well-known method in Turkey, and not only within its army…It then follows how much easier it is to kill them…

Barracks are the settings for violence. These young conscripts are killed by their peers and by their superiors. Osman Özçalımlı was Kurdish, therefore, necessarily a “terrorist”. Uğur Kantar was Kurdish-Alevi a “miscreant terrorist”. Just as Deniz Yurtsever was guilty of the double crime of being Kurdish and a Socialist… As for Sevag Şahin Balıkçı killed by a stray bullet on April 24, on the day commemorating the Armenian genocide, he was Armenian, a “gavur” 1non-Muslim, a pejorative term.[/fotnote]

Accidents, suicides…One can wonder why a conscript with only 4 hours to go before the end of his military service would commit suicide? How many more young men will lose their life from a bullet fired “accidentally” by a colleague?

A “sacred” duty you can buy

These suspicious deaths must be examined in the context of compulsory military service. I would like to point out that this practice is no longer the rule in most countries except for those based and organized on extremely militaristic and racist foundations, such as Turkey.

As a reminder, there is nothing fair and equitable about this obligation in Turkey – thanks to the paid exemption from compulsory military service, conscripts with the means to do so can “buy” their way out of this “duty” qualified as “sacred”. Thus, the youths sent up to the front in the dirty wars waged by the Turkish State are always sons of families with modest means. Always the same ones. When they fall, their coffins serve as a stage for militaristic and nationalist speeches.

In fact, authorities in the Turkish Republic still insistently believe that by forcefully confining the youth in this country into barracks, they can inoculate them with a strong “national consciousness”.

Michael Howard, the British military historian known for his work on the sociological dimension of war says that militarism consists in the perception of values belonging to the military sub-culture as being the dominant ones in a society. This is why states similar to the Turkish one instrumentalize this particular institution, using and abusing of military and dominant speeches in order to shape perceptions. In other words, sacralization of militaristic values and practices serve to shape the civilian space.

Young conscripts aged 20, 21 die in the barracks. And society starts debating around questions such as “should he be considered a martyr?”, or “he wore a tattoo, yes or no does he deserve a religious funeral?” A society torn apart over such questions cannot be anything but distorted, polluted.

What can be done?

This militaristic mindset is one of the greatest barriers erected before the possibility to live in a country where violence, oppression and war would no longer be present.

This is precisely the reason why deep and serious reflection must be carried out on these matters. Osman Özçalımlı, the latest victim, must not be forgotten as were the previous ones. Militarism feeds on nationalism and racism.

Each incidence of a life destroyed in the barracks must be brought to light. Opposition media, at least those still resisting under difficult conditions, as well as progressive politicians with some self-respect must testify to them.

Young Kurds, Alevis, Armenians, socialists must no longer set foot in these military barracks that serve no other purpose than to insure the perennity of a State taken over by a belligerent power.

Even if the militaristic policies seem to succeed in familiarizing populations with death, presenting the lives of young people as “having sacrificed themselves”, attempting to transform these murders into something normal and habitual, we, antimilitarists, conscientious objectors, refuse to become accustomed to them.