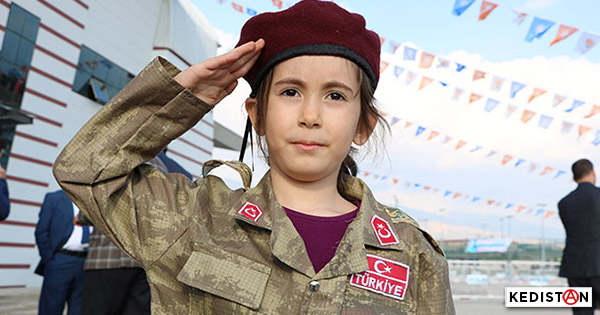 During a speech Tayyip Erdoğan pronounced in Maraş on Saturday, in the company of a little girl in battle dress, he declared:

“There, we also have burgundy-colored berets.1Turkish army elite commandosBurgundy-colored berets don’t cry.2the little girl is upsetJÖH3special gendarmerie forces, Colonel, burgundy beret… Macha’Allah. The Turkish flag is in her pocket. If she falls a martyr, they will wrap her in the flag inch’Allah. She is ready for everything, isn’t she?”

With this call saying “everyone must carry the flag in their pocket” he once again invited millions to kill and to be killed. The explanation for this speech is not “are you ready to die? Are not 80 million citizens ready to die?”  but rather “I am asking you to die”. 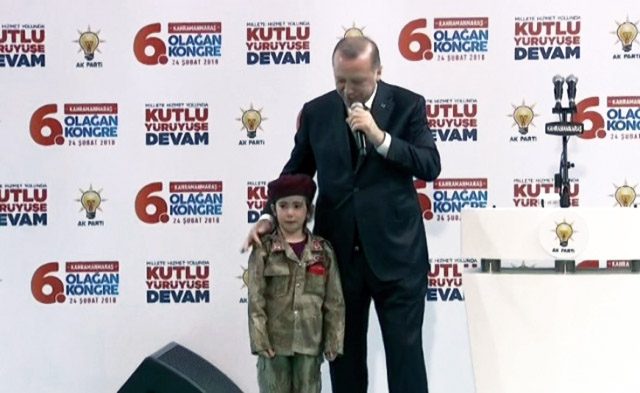 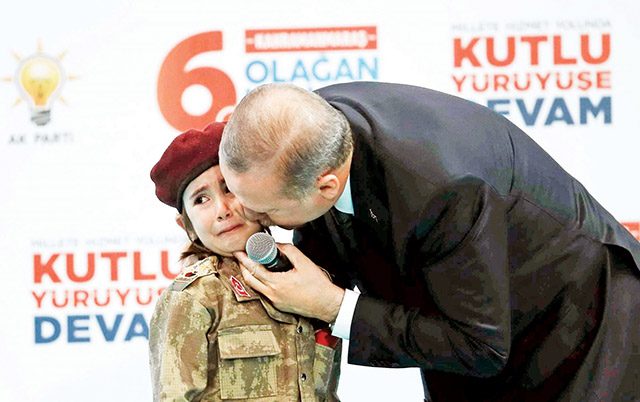 And with the little girl standing by his side, this means “not only those of age to be conscripted today, but also who will be in the future, in the decades to come, they must be ready to die. ” Building the future dreams of a small child on “dying and killing” shows the level militarism has reached in Turkey. This reality that a group of antimilitarists and conscientious objectors attempt to challenge and make visible by their struggle, under the slogan “militarism kills” is perfectly illustrated by this one photo.

In the same speech, he also sent the message to all men capable of bearing arms to stand ready, with these words “those who receive their mobilization order must stand ready. There is no need at the moment. But the moment the decision will be taken, we will lunge forward on the road.”

The mobilization order concerns the call-up of men who have already done their compulsory military service. [In case of a call-up] those receiving the mission order are asked to report to the military unit to which they have been assigned. Those who do not heed the call can be arrested as “deserters” and brought to their unit. The following declaration “The ‘muhtar’4Village or neighborhood officialare charged with following closely the situation of those who do not obey the order. Persons shown to have not reported to their unit when they were in the zones concerned by the ‘muhtar’, will be reported to the security forces”, placed the muhtar in authority.

During the Gezi period, hundreds of thousands of us had unanimously said “Recep Tayyip Erdoğan/AKP will do everything to establish absolute power. The struggle must continue for this reason.” In coming to power,, Tayyip Erdoğan/AKP declared “I will put an end to the military tutelage” except that after taking power, particularly beginning in 2009, he clung to militarism and began implementing its plans, step by step. In his first years in power, while changing his words, under the slogan “Single Nation, Single flag, Single party”, he had adopted totally militaristic and racist words. Some of those who know full well what this means had announced “Bad days await us”. But an efficient opposition was not built up against this. The strongest social opposition to this policy occurred with Gezi. Surviving that period by playing dead, Erdoğan implemented a monopoly of total State violence so as to neutralize practically the entire oppositional structure, both parties and individuals.

Tayyip Erdoğan organized this front on the basis of an anti-Kurdish sentiment. These structures and advances caused a catastrophy for everyone living in Turkey, and this goes on. The only winners of racist and militaristic policies are those whose aim is absolute power, merchants of weapons and blood. Because of these policies, along with the Kurds, the Alevis, the Sunnites, women and men will go on losing. In a fascist order, there can be no room for justice, equality, freedom, nor can there be a happy future for children. There can be nothing but death.

Lately, with the process of occupying Afrin, Erdoğan has started serving to public opinion the fact that dying and killing are “normal” and “worthy“. From the experiences of other peoples we know that the point we have reached is an extremely dangerous one. [The taking over] of the army, the tribunals, the universities, the parties, the police forces not being enough for him, he has established special operation units, arming thousands of civilians. That still not being enough, he is now telling all citizens “be ready to die ”.  There will be no winners in this horror show. History has shown us how racist and militaristic structures evolve and their terrible end, through the examples of Franco’s Spain, Hitler’s Germany, Mussolini’s Italy.

The racist and militaristic structures of Franco, of Hitler and of Mussolini caused huge damage, and horrible massacres and genocides, inscribed in the social history in Spain, in Germany and in Italy. Their sufferings and traumas persist to this day. And now we live and testify to another example taking hold and growing with the same policies.

The biggest struggle against this process is taking place in Afrin. There is much to be done so that the people do not suffer a horrible fate. The struggle in Afrin against this racist and militaristic structure is not the Kurds’ only battle. Individuals, parties and groups taking part in this struggle know this. But that is not enough.

In Europe, I follow closely the reactions and mobilizations of European organizations, parties and unions. The most basic sensitization consists in “Solidarity with Afrin”. This approach is partially faulty. The position that should be taken today should not be one of “Solidarity with Afrin”, but the more active and inclusive one of : “The struggle in Afrin is OUR struggle”.

We can still act in order to win. Organizing more efficiently is still possible in all zones, regions and towns in order to counter this racist and militaristic structure. It is still posible to overtun the situation of the occupation of Afrin and to send them back where they came from.

Today, the largest and most efficient mass mobilizations are in Europe. But Germany and France continue selling arms to Turkey. Women and children in Afrin are killed with French and German weapons. France and Germany must join the mobilizations against Turkey in a more efficient way. In order to do so, all parties, political groups and opposition unions must be part of the mobilization front.