A work by Zehra Doğan auctioned off for aid to migrants 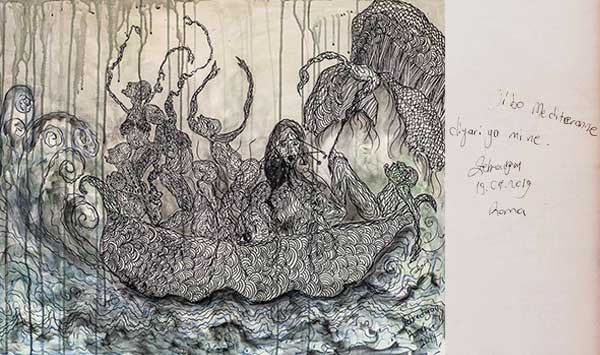 The Kurdish artist Zehra Doğan is putting up for auction one of her works to help in financing operations by the NGO Mediterranea Saving Humans dedicated to rescuing migrants at sea.

The fate of refugees is one of the questions on which Zehra focusses her work.

The work was done during Zehra’s visit in Rome in July 2019. The black lines contrasting on various shades of grey and blue represent the shock and consternation of a shipwreck during a stormy night at sea. The work symbolizes the hope that rescue ships bring to migrants on the Mediterranean, allowing them to cross all dangers, from the Libyan coast to a safe European harbor.

The work is signed by the artist, of course, and on the back, Zehra has written in Kurdish: “My gift for Mediterrenea” – “Jibo Mediterranea miniera di diyariya.”

Characteristics of the work

To place your bid, go to the CharityStars platform

Zehra Doğan is a Kurdish artist, journalist and author from Amed (Diyarbakır) in Turkey. She is one of the founding members and editor-in-chief of a Kurdish feminist news agency entirely staffed by women.

In 2017, she was sentenced to 2 years, 9 months and 22 days in prison for “terrorist propaganda” following her coverage of the news, one of her publications on social media and the sharing of a digital drawing also published on social media. This drawing shows the destruction of Nusaybin, a Kurdish town in the Southeast of Turkey, following clashes between the State security forces and Kurdish resistants.

She was incarcerated in Mardin, Amed, then in Tarsus. She was liberated from Tarsus prison on February 24 2019.

Zehra Doğan donated “Noah’s Ark” to Mediterranea Saving Humans in July 2019, with no payment attached, as a gesture of solidarity with the organization’s mission, at a time when Italian authorities were called upon by the extreme right to penalize those helping refugees.

Mediterranea is a civilian society platform operating in the central Mediterranean in order to monitor, report and condemn conditions under which women, men and children are constantly confronted by tremendous danger in the absence of organized rescue operations, suffering in silence while the Italian and European governments remain indifferent accomplices.

Mediterranea is composed of individuals and organized groups, open to the voices of different segments of society, both secular and religious, social and cultural, unions and political groups who wish to share in the aims of this project in order to restore hope, rebuild humanity and defend the right and the rights of humanity.

Mediterranea acts through moral disobedience and civil obedience. Disobedience when it comes to nationalist and xenophobic public discourses and the prohitibion against testifying to what is happening in the Mediterranean: but obedience to constitutional and international law, to the Law of the Sea, and to human rights in general, including the obligation to rescue those who are endangered and to bring them to a safe harbor.

The main objective is to be there where we are needed, to testify and document what is going on and, if necessary, to save those at risk of dying in the central Mediterranean, as required by existing rules, laws and international treaties.