Interview with Zehra Doğan : Painting with blood to resist 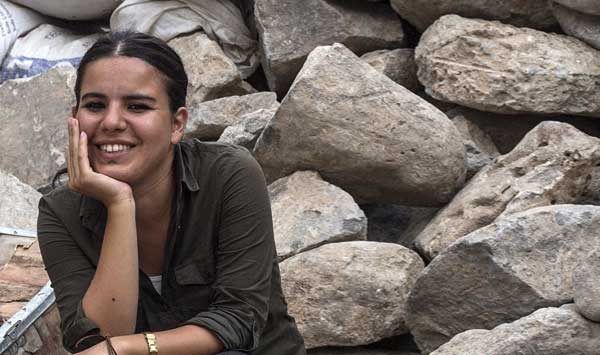 Here is the English version of Arianna Folgarelli’s interview, published on March 16, 2020 on Ultima Voce in Italian.

Zehra Doğan looks less than 31 years old. Petite and good-looking, she displays a   a contagious smile in her photos. One has to wonder how she manages it, considering she served two years, nine months and twenty-two days in prison in Turkey just because she wanted to show reality in a drawing.
You may also be wondering why.

In 2016, even before Erdoğan declared a state of emergency following the coup d’état, under a state of exception already in the Kurdish regions since 2015, Zehra Doğan was in Nusaybin. This small Turkish town on the border with Syria is mainly inhabited by Kurds. For this reason it was literally reduced to rubble by the government military.

Overwhelmed, first by dismay and then by outrage, Zehra, then armed with a digital tablet, depicts what she sees appearing on a picture of the army: semi-destroyed buildings from whose windows flew Turkish flags. The drawing, on Twitter, went around the world and the sentence for “terrorist propaganda” was obviously not long in following.

During the period of detention, despite the ban on painting and creating anything that had to do with art, she proved to be very clever. With makeshift materials she continued to draw and to disobey. She used leftover food, hair, tea, coffee and menstrual blood. By drawing, she fulfilled her Resistance.

• You are a journalist, a writer, an artist and a feminist. The state accused you of propaganda of terrorism for representing reality in your own way, you knew the risks you were taking and yet you continued to fight in the name of justice. What allowed you to accept an arbitrary sentence and resist jail?

These types of charges and verdicts are nothing new in Turkey. At different times, under different governments, this way of silencing and punishing opposition has existed throughout the history of the young Turkish republic. In recent years, countless journalists, human rights activists, intellectuals, authors-artists, but also male and female politicians have been prosecuted, charged and imprisoned. I am far from being the only one. Turkish prisons are constantly full.

I can say that mine was a tragicomic verdict. I was convicted for drawing the destroyed city of Nusaybin and doing so would have overstepped the “limits of criticism”. There is nothing imaginary in this drawing. It is the artistic representation of reality. If drawing reality oversteps the boundaries of criticism, I must ask what limits were exceeded in destroying this city in reality. Moreover, art has no limits. Such an interpretation is the sign of intellectual insufficiency.

Therefore, I was neither surprised nor downcast. If prison is the price to pay for proclaiming the truth, well, I was willing to take the risk. I was able to resist through awareness of this reality and thanks to the solidarity that helps us to stay upright together in prison. Prison is also a real place of resistance.

• What were the most typical episodes of injustice and violence you experienced on your person?

Violence is not only physical. For example, they kept be from having drawing materials. They confiscated my drawings and, for two years, I attempted to produce them in secret. There is nothing worse for a painter, an artist, to have to hide in order to produce art. And seeing her work, her achievements destroyed before her eyes is torture. It’s a policy of intimidation.

As for physical torture, I have friends who were physically tortured, particularly in Tarsus prison. They wanted to install surveillance cameras in the wards. These are our zones of privacy and my friends did not accept this. This happened before I arrived. They also objected to a military regimen. The administration demanded military discipline from the inmates. They replied that political prisoners would never accept that. They held protests, Femen actions. They were tortured. They were locked up for days in the cell known as the “sponge room”. They were kept in rooms that can make human beings psychologically very, very disturbed. Some had teeth knocked out, others later developed gynaecological diseases. When I arrived, some of the women still had bruises around their waists. They had been heavily tortured. They had been deprived of food and water for days. This kind of thing is ongoing in Turkey today. This was in 2017.

• What were the episodes of solidarity and closeness?

As political hostages, we have a common Right of Comradeship. We women know very well the meaning of the period through which we are living. In our life experiences, there are remnants of thousands of years of patriarchal power…What happened that led men to put the world in such a state? The answer lies in hierarchies, ambition, dissatisfaction, accumulation, power, authority, violence, wars and aggression that force people to defend themselves…In your opinion, is it possible to constantly fall into the same mistakes, while knowing these facts and discussing them every day and thinking of ways to extend the struggle? This is why there is no room for authority or any hierarchy among us in prison.

For example, some “mothers” were incarcerated in our wards. They looked at us and said “such a waste. How can they destroy young people like you?” and they wept. “We can understand when it comes to us, but you, you shouldn’t be prisoners.” On the other hand we were saying: “They shouldn’t arrest mothers, we’ll do prison time for them.” Each one was thinking of protecting the other.

• Despite your experiences, you place your trust in the future, what nourishes this optimism?

Should we start from a possible point of rupture that would change the world? We must focus our minds on life virtues such as goodness, beauty, justice. Because, just as evil brings ugliness and blindness with it, good brings beauty and justice. This extremely simple, yet dialectical statement, is important and burning with reality.

The ambition of power is a disease. It comes out of every pore in the body. It has put the world in the shape it’s in. This disease of power ideology has spread, trampling on women for thousands of years. I believe women will change the face of this world which is dying from patriarchy. This is the conviction that drives my optimism for the future.

For example, there is currently a huge challenge in Rojava. The challenge of not administering following men’s logic but in a gender-neutral, self-managed style in the hands of women. This challenge brings hope to the world. This is why before everyone, women must take ownership of this project and support this revolution.

• How do you live your condition of exile?

I don’t consider myself an exile. I’m not a refugee, I haven’t asked for asylum. I am currently in residence, I live a nomadic lifestyle, I work and I travel a lot. For the time being, I work in places that give me the opportunity to practice my art in complete freedom.

Sooner or later, I know I will return to these lands to which I belong and from which I draw my strength. I will be reunited with my home, my family, my friends, my colleagues…

• How did you react when you learned that Banksy had dedicated the Bowery Wall of Manhattan to you?

Banksy’s support made me very happy. But the greatest happiness for me was that the drawing of the destroyed city of Nusaybin, for which I was imprisoned, was projected in giant dimensions on the busiest avenue in New York. Through this projected drawing, the victims won a victory because the whole world knew what had happened in Nusaybin. The reality the Turkish state attempted to hide, for which I was condemned, exploded before the eyes of the world like a slap in the face.

Sentenced to nearly three years in jail for painting a single picture. #FREEzehradogan

• While serving your sentence were you aware that there was an international mobilization for your cause?

Yes, I knew. My friends at Kedistan had already thought of having some of my work escape out of the country and organizing exhibitions. After a long time I spent on the run, my arrest immediately transformed their approach into a mobilization of support. International organizations, including PEN also supported me from the start.

All these networks quickly meshed into a solidarity campaign. I received the news through letters. Moreoever, my responses to this correspondence were published in French, at the end of 2019 by Editions des femmes under the title “Nous aurons aussi des beaux jours.” (We shall also know fine days). So I was aware of everything that was going on. What made me and my female prisoner friends happy was the collective and universal aspect of this campaign. For during the hardest times, collective solidarity is the greatest source of morale and energy for prisoners. In those places where human beings are torn from their environment, locked up and isolated, where everything is done according to this mentality to subdue them, communal life within and collective support from without are what keep people standing.

• Is the disintegration of democracy in Turkey an irreversible process?

I will answer that with a question. Has democracy really ever existed in Turkey, even for only one day? As demonstrated by the accusations and sentences I mentioned in answering your first question.

What is it then when a State camps on a monistic attitude, imposing a language, a people, a religion and writing a nationalist narrative in this image, denying the mosaic of peoples, their diversity, and attempts at all cost to muzzle those that have not gone along with its project, since the beginning? This is the history of Turkey. In this history, there is little room for democracy, freedom of expression and freedom in general. Unfortunately, democracy is not just a question of elections. Even today in Turkey, politicians who were elected with very large majorities are removed from office, replaced by state-appointed administrators or languish in prison.

There have been so many periods of repression. The military coup in September 12 1980 ran over the country like a steamroller. That nightmarish period has left indelible marks. But, as activists, defenders of rights say who have experienced the previous eras, the current power is only continuing with the methods of repression inscribed in the country’s history, and now conditions are even more severe and difficult.

Seen from the outside, from Europe or elsewhere, the tendency for years has been to talk of a “disintegrating democracy” or of a “country on the verge of dictatorship“. Where is the border that allows to say finally that it has been crossed?