Worse than the coronavirus, you die! 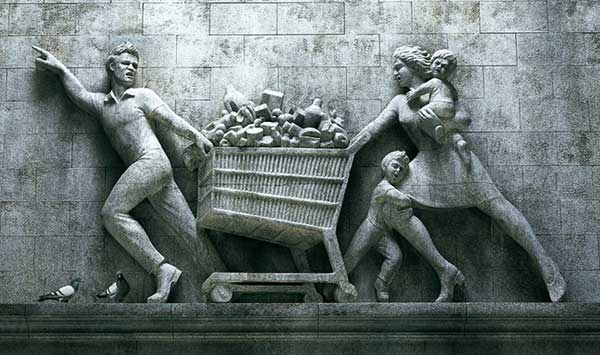 Concerning the coronavirus, and as an introduction, I set down a few sentences here, in no particular order, in a game of pick-up-sticks that may last for a long time.

1• The coronavirus also serves as a social revealer

We go barrelling through open doors (and yet, they are closed during a period of confinement that will become almost world-wide) by saying, as with each human catastrophe: “Nothing will be the same as it was.”

In advance, and without waiting for the inversion of the curve, as a Godot of a President did once in France, we can predict quite the contrary: “everything will stay the same as it was.” Of course, a number of realities lived through during this period could lead to awareness becoming vectors of change, or even of “revolutions”. But the implosion of capitalism is not scheduled for tomorrow morning and even less so without humans to contribute to its downfall.

Faced with the dominant neo-liberal ideology of “there is no alternative” that doesn’t only comment on capitalist development but organizes it and sets in “in motion” today, one could point out all the contradictions and structural weaknesses of this financial and world wide capitalism transforming the world on a daily basis. But noting contradictions and collapses do not revolutions make.

A virus is causing the crashing of world trade markets and creating panic over shortages in a system where predatory approaches to resources reign while, at the same time, overproduction and waste are part of the system. The lack of one iPhone and the world becomes a desert. So what?

On a small scale, any human catastrophy stupefies the affected populations and throws them into survival mode and exile, when war is involved. The same holds true with little overall notice for all the regions in the world experiencing the full force of the first consequences of climate change, or who suffer from the predation and destruction of their life environments. The awareness of those concerned is then noted elsewhere, very rarely locally, and is lost in the overabundance of daily news, before even being shared.

The proxy wars in the Middle East and elsewhere, in Africa, have more consequences on the strenghening of borders than on world-wide awareness of their causes, their triggers and their continuity. Yet they cause sieges, confinements, processions of deaths of women, men and children, exodus. In comparison, the coronavirus is a small player in terms of numbers of victims. But, here again, outside humanist empathy, the link between the capitalist economic system that prevails and these heavy human tolls does not concern the rest of humanity. We make beautiful geo-political analyses out of them…

Rapidly evolving means of fast communications, the networks and the circulation of data have caused an environmental awareness in these “globalized” years, even if, in Africa, in China or in Europe the tangible reality of this climatic crisis presents largely variable developments. The econological virus spreads and questions human systems…However, without pointing out capitalism as the culprit too radically, as we know full well.

Of course, there is no point in looking, you will not find in Marx or Bakunin an outline of the consequences of a crowned virus on the good functioning of capitalism and its contradictions, through which there could occur a surge of revolutionary awareness…

Yet, at the global scale, blatant contradictions are being shared in a panic…

Books, novels, “my day under confinement” or “me and the coronavirus” will emerge from this sanitary crisis and even no doubt, film scripts.

“We are at war, goddamnit!”

And this “war” against the coronavirus arrives at a time when the sense of the common good, of the collective, has been subjected to the steam roller of neoliberalism even in the farthest reaches of the earth. And this, under varying State arrangements, grouped under the label of “democracy”. TV philosophers and authors of fast food books, those who “don’t do politics” will blame egotism, individualism and other inherent failing in humans and reach the conclusion: “under these conditions, it was to be expected, it’s only human” – between two ads from a strangely distorted universe.

And so we greet with a simple “not nice!” manifestations of unconsciousness, of panic, of useless exodus or of compulsive buying. What does morality have to do with it? Are these not precisely manifestations of the fact that the lessons of liberalism have been well learned, in school as in the zones of consumption?

In and of itself, the full shopping cart is political.