Neoliberalism • Is there a Stock-Market-Corona? 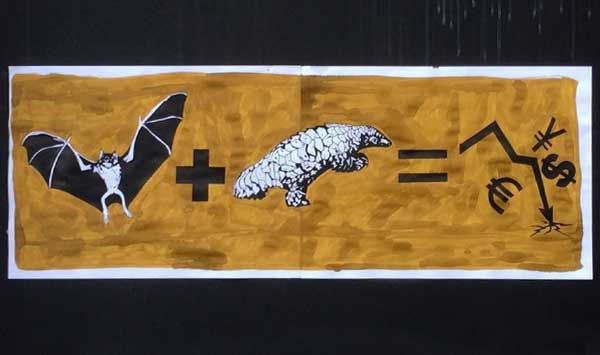 “In fact, a pandemic such as this one is the fatal test for the entire rationale behind neoliberalism. It puts a brake on what capitalism requires be kept in a constant frenetic movement” wrote Frédéric Lordon.

In my own way I could have written that this coronavirus definitely empties the markets more surely than the frenetic moves of an unfortunate candidate at the Parisian municipal elections. It would be less serious…But do we need to say any more on this at the moment?

This sentence by Frédéric Lordon could figure in the game of pick-up-sticks I’ve begun in this ongoing column.

2• The financial bubble boosts the effect of the virus

And during the 12 years that followed, the uncoupling of the real economy from the financial sector became even more of a feature of globalization. Greece, among others, suffered to the core from the EU’s financial policy when, in 2011, then in 2012, the EU reinforced the “European Budgetary Pact”. Financial dogmas, both those of competition and those of a ruling Market, just as those imposed on States ordering them to “trim the fat” off their expenses, these were the heirs of 2008 in Europe.

At the same time, the clearing of profit margins based on existing economic differentials at the world level accelerated and boosted even more the globalization and “frenetic movement” Lordon mentions.

Ten years later, “the Markets” – best described as the tip of the iceberg of globalized finance – had recouped their losses, at the expense of public infrastructures, notably, and to the great satisfaction of the capitalist market. The phrase “collectivize debts and privatize benefits” was applied to the hilt. To such an extent that many economists expected a new negative reaction from the financial markets, one of those bursts of the bubble the capitalist system knows so well since it carries within itself all of the initial contradictions that may lead to its downfall.

To simplify the world-wide situation in 2020, one can simply say that the coronavirus has forwarded the date on a latent financial crisis, and arrives in a world context where the multilateralism between States, as possible “rationality of the system” has disappeared with the withdrawal of the 1st world power and its launch of an economic war against the world, starting with China. This is a thoroughly simplified panorama, but it is useful in order to understand how a coronavirus that moves one of the sticks in the game threatens the totality.

Of course, the financial masses which neoliberals call “investors” and that we must characterize as “annuity confiscators” are panicking even if they already knew full well they could not double their investments indefinitely.

While consumption of pangolins falls, the world trade markets are at one another’s throats…For visual content, let’s add a barrel and an oil field. You will get the picture.

The great global turmoil, initiator of wealth now coughing a bit and one of the countries allowing the upheaval stepping back, the price of fossil energies suffers the consequences, knowing that the economic competition between producing countries, including the United States, no longer has a price referee who can regulate the game. This coronavirus didn’t show any fairplay in waiting a bit for India, Vietnam, Africa even to grab the relay stick on differential profit. Finance is worried.

Don’t expect me to comment on the redemption of central banks’ debts, the catastrophic reliance on freshly printed money. Don’t expect from me speeches either on the after where “everything will no longer be like it was before”, since there were “no alternative”. One can only expect that capitalism, acting like a wolf against humans, will seek and undoubtedly find yet another temporary extension, by cobbling together some of its crises, once again. Unfortunately, the climate crisis will not cease with a temporary improvement on CO2 emissions.

Undoubtedly, it is more urgent to attempt a look at how the “States” in disarray are becoming both decisionary structures towards which everyone turns, so dedicated are they to obscuring or setting aside their public policies on health, while becoming the center of future and current responses as financial services, under cover of “maintaining activity”.

You don’t re-invent yourself.

Illustration: Street art appeared on the walls of Nantes