Coronavirus • In What State Do I Wander? 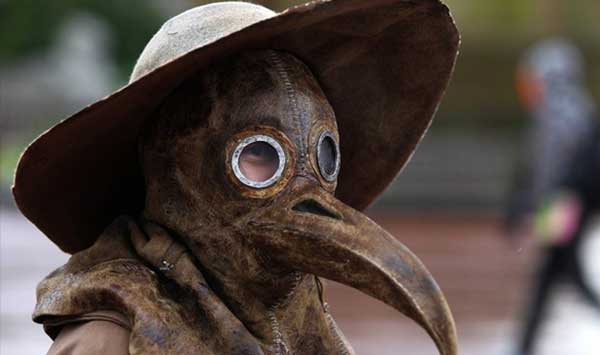 I’m continuing my game of pick-up-sticks, of jumbled sentences, concerning the coronavirus. And since the State insists on keeping its hand in…

3• And Since the State Insists on Keeping Its Hand In…

These days, I’m hearing a sentence over and over again: “A Statesman will be judged on his way of surmounting the current crisis.” Another open door during this period of confinement. But not only.

This intriguing coronavirus puts the question precisely to all these expressions, running from “national unity” to “Republican civism”, through a hodge-podge of genres between “public services”, “State services”, the Protective State, the National Economy, plain old Nation…etc.

Never has it been easier politically for a leader to don the costume of Father protecting the Nation, as long as he rests on a cohort of knowers, since the “subjects” turn toward him all at once for an accounting while, at the same time, he exercises his “authority”. For all this, we turn toward the State.

Before going any further, I must take a step sideways, not in order to deny the pandemic and its reality, but to return to the beginning of the columns, with a reminder that the globally spooked reaction to the pandemic is only equalled by the exacerbation of every inner contradiction in the global capitalist system and of its financial pilot fish. The reaction is one of panic. Reaction on which may follow every excess as well as deep reconsiderations of the little that this system has not yet destroyed or diverted on a world-wide scale.

Why would capitalism transform itself into a philanthropic system when, only a few weeks ago, its component States responded by violence, torture, death to those rising up in resistance on 3 continents, or by war. I remind you of the Middle-East. And, precisely, during this crisis, the financiers of neoliberalism could well rediscover the virtues of a State and of authoritarianism, by learning from the nasty habits of endangered populations and of confinement. In fact, neoliberalism and the State have never been enemies, and even prospered together under the previous century’s dictatorship in Chili.

For instance, the French model is one of the prototypes of Nation-States propelled across the world, sometimes with bayonnettes, sometimes with cannons. And as it largely melds with the history of past centuries for living generations, it combines with the notions of Republic of the State as Provider, of public services, of a “social model”. No one experiences its “legitimate violence” anymore, except when it is exercised with truncheons, rubber bullets, grenades and tear gas. A large segment of French society has become accustomed to denouncing the neighbors’ truncheons while praising the efficiency of maintaining order at home, in defense of “Republican values”. Even the French left is jingoistic, just as it was colonialist previously, and it constantly combines this with the acquisition through previous struggles of social systems, services, public and common goods and of…the State.

This is how, in the panic surrounding the coronavirus epidemic, we naturally turn toward this State, its structures of governance, its police, even its army, in order to “lead the war”.

Noticing “at the same time” that this very State and its successive governments led austerity policies, curtailed and destroyed common goods to the benefit “of the wealthiest“, and how popular was the slogan “President of the wealthy” is a contradiction that Republican politicians summarize for us under the expression “a democratic debate useful to the Nation’s unity”. Close the quotation marks. And so we will wait for the changeover as in Beckett, or for the backlash at the end of the pandemic.

So when a crowned virus arrives in the Republic and appears to threaten the entire Nation, the annuities, the profit and the pursuit of “reforms”, the system ramps up on all burners.

The word “confidence” appears as do examples of “incivilities”…Old class reflexes reappear on one side and take off to fill vacation homes or beaches before the finer days running loops of images of heavily attended markets in lower-class Parisian neighborhoods run in a loop, opposed to the “wisdom and civic behavior” in deserted streets and passes “controlled” by the police. These governments have no confidence in the populations’ resilience but command it for themselves, with sanctions as support.

The “collective” watchword is stay confined, each in your own home. Combined with frenetic appeals to “go on working” in order to avoid “economic collapse”. Clearly, building carts for supermarkets, selling cars or constructing office buildings are activities essential against the coronavirus…All this cacophony deserves another article, in the form of an inventory à la Prévert. As it also calls for an article on all that could be possible, collectively, outside a framework of blind obedience. Joint resiliences do not necessarily match up with warlike standing at attention.

Physical distancing, confinements, masks are indispensable and necessary during this coronavirus sanitary crisis, just as would have been common goods in sufficient quantities in the health sector. Saying otherwise is not in order. But what is uncalled for is the fact States are seizing the opportunity for social policing in the name of superior interests, to cover their own exit from the crisis.

And bottom lines persist that augur no good for what will come next. If some austerity measures are perforce lifted out of necessity, all the screws on the exploitation system are being tightened and governmental measures could very well play on “confidence” as a means to finish cleansing the system of the social gains made by “labor”. This system, after hunkering down at the approach of the sanitary crisis, will attempt to save itself by “recuperating” its losses. Trust the system for that. And let’s not expect the fall of authoritarian regimes either…

Nothing will be as before, but only worse, perhaps.