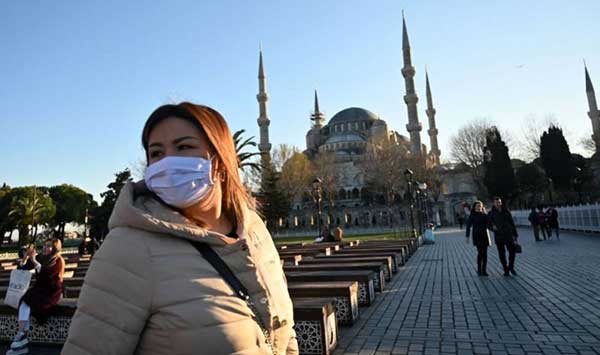 Some laughed when they saw the crazed one in Turkey kicking at the door of a closed mosque and saying he “was being deprived of Allah’s protection”.

But after claiming that “the Turk’s strength” would protect from a virus “coming from abroad”, the unavoidable evidence became that Turkey had entered epidemic times. And even Tayyip is kindly advising everyone to stay at home when returning from work, and to wash their hands.

Oddly enough, the “virus from abroad” found a situation in Turkey where everyone stays at home without the police being involved, since it is busy arresting those journalists who dare comment the crisis. Proof being that you can think Allah will protect everyone, and doubt, both at the same time.

Istanbul is emptying of its passers by, cafes and boutiques are closing of their own accord, because of a dearth of customers. An extra fear tacked on to that of taking a false step, opinion-wise.

But don’t expect the coronavirus without Tayyip’s nasty tricks. Turkey produces masks. Europe needs them. The Reis holds the keys to the customs services and demands cash in advance… Only a few days ago, millions of masks ordered by Italy were awaiting the bank transfer, while the government was guaranteeing that , with more than thirty production units, Turkey could ship 50 million masks per week. But these are no longer the good old days of Berlusconi, a good friend of Tayyip’s.

This, at least means that a few workers will go on receiving their meager salary, while all the others – already well beaten down by the economic crisis – attempt to survive.

Journalists who alerted or criticized, or simply published on social media were almost accused of “propaganda for the foreign enemy” and held in custody. You can never be too cautious, best to confine everyone…

In Konya, pilgrims returning from Mecca were quarantined in student rooms at the university from which the poor students were pulled out, barely awake in the early morning. First the pilgrims complained that the beds had not been made. Then, they tried to escape, forcing the barricades and confronting the police. If I had seen that a month, ago, I would not have believed it… Even less, when I saw a pilgrim spit on a policeman, saying “if I’m sick, you should be too!”… Allah’s voices are impenetrable.

The official figure of ten deaths was reached today, Saturday, but we don’t really know how many people are contaminated overall in Turkey. Officially, we are told some 700. I can’t say if prayers in the homes or masks filtering the information guarantee this figure.

Apparently Turkey is going to follow an original route and multiply testing. This is the regime’s major communication at the moment: a test with results within 15 minutes, according to State television.

Meanwhile, for the little people, it’s prayers and washing of hands five times a day, and cologne water is becoming scarcer and scarcer.

Ergo, in Syria, the Turkish troops will find the time to let their beards grow.