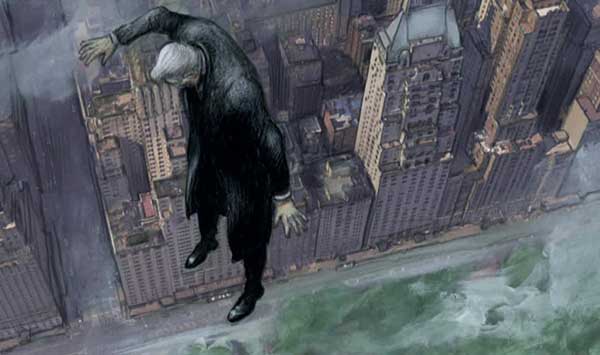 In the mouth of a political leader these days, the verb “to anticipate” about the coronavirus is either a phony excuse, or a lie, or a talking point used to hide detrimental anticipations on an upcoming future.

For centuries already, the capitalist world has never anticipated anything other than its benefits, and has arranged matters in such a way as to keep laboring humanity with its head sufficiently above water to go on breathing.

I know, pronouncing that dirty word of “capitalism” is old fashioned and shows my age…

Would you rather I wrote “globalization of exchanges”, “market economy”, liberal economic system”, “the world of free and unbiased competition”, or anything else of the sort, in one of a number of less “dated” periphrases? But why should I put a mask on what financial and economic actors themselves call by its rightful name, as if a certain Capital had once convinced them and seen through their disguises?

I don’t think I need explain to Kedistan readers that the Stalinist experience contributed as much to capitalism and to the surge of its globalization than did two world wars, by crushing peoples, destroying all human conscience, and making an ad nauseam farce of political parlance.

As I said, this capitalist world has always managed its inner contradictions through crises, colonizations, wars, market krachs and accelerated proletarization…It has compensated its labor crises by various tricks, from slavery, oh yes, to “social habitat”. It even put up with class warfare when that seemed indispensable to its survival. The history of the labor movement is filled with regressions/social gains…of which we cannot say if they were a permanent victory, an achievement conquered through struggles or a “reform necessary” to the system’s survival.

So, hasn’t the time come to de-confine ideas? Faced with the fears being distilled, hasn’t the moment come to try to understand what has taken hold of over one third of humanity to the point of holding it frozen and hovering above itself?

I don’t think Enki Bilal will resent my borrowing an image from his 2019 album “Bug”.

Reading it, you will see that it deals a bit with our topic, but as a “novel of anticipation”. This is the name given to this literary genre, purporting to classify books inside libraries…

This image came to my mind along with that of drones that wish us well.

We have anticipated the sanitary crisis.

We have been preparing for a good while for this eventuality.

The objective is to anticipate the curve.

The government had anticipated the risk of shortages.

I interrupt the selection here and spare you the actors spewing these words on the flat screen.

But take heart, I can see it, the dawning anticipation.
It doesn’t wear a mask in fact, even where there are no shortages of them.

With a Donald Trump or a Bolsonaro, it even opens its mouth wide. And it rattles on about the Economy, and savings, about labor and about finances. The same concerns are expressed by those who, up until this point, favored the Malthusian, quasi Darwinian hypothesis for the epidemic that would just naturally follow its course. This concern takes the aspect of “emergency State measures”, notably in France.

Yes, urged on by the recent financial panic, by the mewing from the Stock Market, by the rebirth of competition, States are beginning to anticipate, and to understand that with their good old recipes for austerity temporarily pushed aside, ways and means may be found to take advantage of the situation in order to liquidate social impediments, through long-term temporary measures, like those old post-war wartime baracks still dotting the countryside.

Such is directly the case in the field of relationshhips between finance, banks and the real economy.

We all know that the world crisis, of a financial nature, in 2008, allowed for a Darwin-like restructuring and accelerated the great world-wide move to “sharing of work” and hence, the exploitation of economic differentials, margins and benefits. If you examine the curve of delocalizations/unemployment, you see that the 2008 virus, fought thanks to massive bailouts for banks, the socialization of losses and the privatization of profits took us to the brink of another potential bursting of the bubble.

So, old remedies being applied to new problems, we see emerging the profile of a financial anticipation that may very well put in the hands of the bubble and of the banks, that section of the real economy (a capitalist one, true enough) that was still making its own decisions on the “market” – you know, that celebrated “risk taking by businessmen”. In the same way as banking modelled productivist agriculture through loans and aids with shackles attached to them, we see the profile of similar policies at the core of the means of production. Neoliberalism spins around, through State financial policies, with the banks taking advantage of the currency printing press providing loans to the real economy. In those instances where States could nationalize holdings, the fox of indebtedness will enter the chicken coop. Advice and economic orientations will follow, like pesticides…

From the game of pick-up sticks, we should also draw out the stick involving social protections, those “givens” I mentioned earlier. From one exoneration of payment to another, because of the coronavirus, from sick leave to postponements, from billions on to more billions, we can simply wonder from were all those sudden riches are suddenly trickling down on us? What abysmal deficits will serve later as reasons to “reform” this system and eradicate the social virus from it?

Just a thought, on the spur of the moment, with no true hindsight yet on the French-style announcements of anticipation.

Apparently, we are told, dividends would match those of the 2019 upturn. Freeze!