Obtaining a killing permit in Turkey… 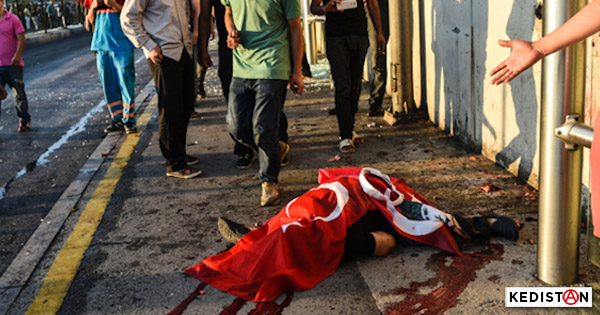 The two latest decrees with force of law n°695 and 696, announced on December 24 2017 in Turkey don’t stop with the declaration of new purges. They promise quasi-immunity to “civilians” demonstrating their “civic” anti-terrorism.

One recalls the images of hysterical groups punishing young Turkish soldiers after the failed coup attempt in 2016. And one knows how that failed putsch, transformed into a heaven-sent gift for Erdogan was outrageously instrumentalized, to such an extent that we can now describe it as an ongoing successful civilian coup d’état, and not be wrong in doing so.

Turkey is still under a state of emergency regime, renewed five times since the constitutional change, and is ever more governed by successive decrees. Parliament has become at best a registration chamber, a residual democratic facade given to speechifying.

Here is thus an Nnth decree destabilizing, dismissing, throwing out on the street more than 2700 civil servants or State employees. More than 140 000 of them have already been subjected to this fate since 2016. Among them, over 55 000 were arrested at one point or another, or are presently subject to legal proceedings.

At Kedistan, we have followed and accompanied the exemplary struggle, both desperate and emblematic, of Nuriye and Semih, not to mention others, fighting against this policy of purges destroying lives and families. Their struggle continues.

No one can be fooled by the July 15 2016 alibi. If some soldiers, policeman and high-ranking officials were indeed linked to the Gülen political sphere – some with the AKP’s blessing in preceding years when this trend coexisted with Erdogan during his rise to power, others, the greater number, were opportunistic victims. The vast majority of the “liquidated” are opponents, victims of informants and denunciations, or of the settling of accounts. In their quasi-totality, the academics are signatories of the Petition for Peace, or opponents to the educational reforms.

Although journalists are arrested and prosecuted under other proceedings, agencies, and medias are also shut down by decree. Across Turkey, some seventeen  institutions, two newspapers and seven additional associations will be eliminated this time.

But we might say there’s not much news in this…

Once again, terrorism is designated as the scourge jeopardizing national unity and, with the 2016 putsch as an excuse, one quickly arrives at a generalized terrorism lurking in dark corners. Every opponent becomes a potential domestic enemy and will be prosecuted as such.

One need only take in the litany of arrests and imprisonments touching every social category, all types of personalites or simple human rights activists, political officials or rank-and-file member, journalists and intellectuals, in order to find each one branded with “terrorism”.

It is now admitted jurisprudence that one who does not submit is a terrorist, does propaganda for terrorism, or maintains links with terrorism.

But this time, the devil is in the details.

Since its publication in the official gazette, jurists are cautioning against one sentence concerning “the citizens’ battle against terrorism”.

Whether the person bears an official title or not, is fulfilling an official duty or not, anyone who acts or has acted to prevent the commission of the coup d’état that unfolded on 15.7.2016 as well as terrorist actions, and actions in continuity to them, does not incur for these acts any judiciairy, administrative, financial or penal responsibility.

A reward for generalized denunciation already exists since 2016. The systematic surveillance of large towns (let’s not even mention Turkish Kurdistan) is in effect. A camera or spyware is less obvious than a uniform on the corner of the street. Certain AKP cadres or militants have seen their access to weapons widened and legalized. Supplementary police forces are legion. The State apparatus has been subjected to purges and overhauls, and even transfers of powers to the political sphere. Justice executes.

And at the bottom of this repressive pyramid, the civilian who will henceforth want to “serve the One and Indivisible Nation” by his direct intervention against suspicion and the terrorist threat, will have the possibility of benefiting from immunity.

The structure was still lacking a right to kill.

It has now become possible by decree, thanks to a bigoted and nationalistic populism. Occult militias can rise again and compensate for those rare remaining legal difficulties in the democratic facade, still hindering the liquidation of opponents.

The first to rejoice in Turkey was a notorious thug and mobster who had already promised a “blood bath” to academics who had signed the Appeal for Peace.

One can also make the link with the recent revelations by Garo Paylan (HDP deputy) who handed over to European governments the names of opponents considered as terrorist enemies of Turkey abroad, targeted for assassination. Their authors would be cleared of wrongdoing in advance… And we already know of the Turkish government’s pressure tactics against the European governments, on the question of migrants as well as on that of armament deals, not to mention de geo-political questions relative to the Irak-Syria negotiations via “General Putin”.

Other sections of the decree might seem almost anecdotal.

Article 6-87 – Vakıfbank is transferred to the public treasury. Meaning it is put under protection. As a reminder, the bank’s name appears in the Zarrab affair. If a condemnation should occur in the United States, the Turkish public treasury will pay, and not the recipients of the bribes of course.

Article 45 – Modalities for the sessions and the decision processes of the General Council of the Appellate Court and the General Penal Council are modified. Notification is given that these changes will be in effect until the end of 2022. Long live the state of emergency until 2023.

Article 86 – Private banks will be entitled the transfer of external debts to firms or funds guaranteed by the State. Which means that, should there be losses, the bills will be paid by the public treasury.

Article 88 – Civil servants assigned to penitentiaries cannot resign before the end of their mandatory service period, if they do, they must make a double reimbursement of their expenses to the State. This means that guards who do not want to persecute and wish to resign cannot do so.

Article 108-109 – The “kayyum” (administrators named by the State to replace a mayor or the dismissed head of a firm) need not be confirmed, which means they cannot be held responsible, even if they cause its bankcrupcy because of its illegal exploitation.

Finally, articles 101-103 deal with the adoption and generalization of the “goose-shit” colored uniforms for those accused of terrorism linked to the failed putsch… the wearing of the uniform will no doubt then be extended to suspects of terrorism in general.

In a recent Kedistan column, the question was raised of “Turkey on the way to…”

One might almost say that, through the meanderings of an end-of-year decree, an extra sidestep has been taken on the narrow path this regime is walking on the road to fascism, if such a sidestep was still necessary.

Behind the glittering liberal and modernist facade promised for Turkey 2023, Turkey’s centennial year, a new national revolution is taking hold, a populism steeped in Sunni islamism and Erdogan’s older than the moon caliphate. It could putrefy the country.

The ultra-nationalistic liberalism of Meral Akşener (İyi Parti – the Good Party) might almost appear cleaner and more promising for the future, compared to the AKP regime, and the CHP’s Kemalism, a refuge for democracy.

This latest decree reveals the ongoing crisis of a power forging ahead in its mad drive, disintegrating the nation-State on which it rests, and adding extra features to the infernal machine, perhaps as early ideological preparation for the next elections.