Turkey is always on the way to something… 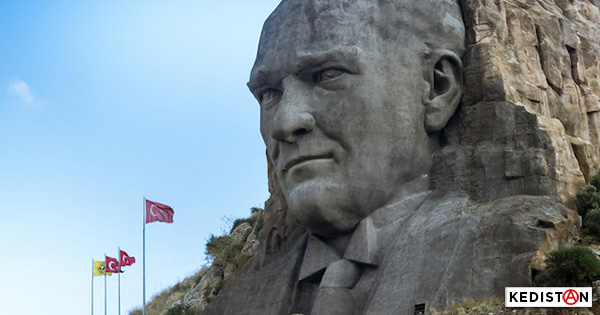 Beginning a new article on Turkey means returning to these past few years during which wars, crimes against humanity, geostrategic games, and Occidental duplicities have built up an impossible situation in the Middle East.

It means constantly bearing in mind this situation has wounded so many in their flesh, at home and elsewhere, and forced several millions into exile, some of whom encountered death on the way.

It also means having to tear apart the veil of false modernity that leads tourits visiting Istanbul to say “everything is fine.”

We might agree, if by this one means the Bosphorus hasn’t moved and that the view is still  postcard-perfect – as long as you avoid the buildings being put up “for 2023”.

But as we keep encountering in Europe press articles, books and even meetings and conference about Turkey, informing us the country is “on the way to…”, some day, the question will have to be raised: “on the way to what?”

My modest intention with this article is to broach, in the usual unpretentioius and disorderly fashion, a reflection on a topic greater experts than I have been studying for some 40 years.

Mouthing the word “democracy”, some consider it a kind of imperiled species on the road to extinction in Turkey. A sort of imperiled masterpiece…

For me, a leopard is a leopard, a polar bear is a polar bear, a dodo was a dodo, a bee is a bee, but in Turkey, democracy is an unknown species.

The Turkish Republic isn’t quite one hundred years old. Even moving back only 40 years, one already encounters a few massacres of populations, often the same ones. No need to move back much further, for we might then find on the Republic’s baptismal font, not only massacres but a true genocide.   One of those which, at the cost of political maneuvering to seal electoral alliances, little by little, left and right-wing parties “recognize”… And if you talk a bit with Turkish Kurds, they will also describe “the nineties” as years of torture, crimes and exactions, of jailings, exiles. Let’s not even mention “the eighties”…

So what exactly was this “democracy” so deeply regretted by those who claim “things were so much better before”?

Of what is the AKP regime a fruit, a continuation, a prolongation, a rupture?

Perhaps these questions seem mundane. We could settle for saying “things are lousy in Turkey”… “Well, I was there this summer, and I was told things weren’t so bad…Personally, I didn’t see a thing.” I spare you the name of the hotel and a description of the gulls above the Bosphorus.

A memory streams by in my head from my lycée days in the sixties. The “Algerian conflict” was heading for Evian, the streets were festooned with tags by the OAS, newspapers featured black and white photos of a ripped apart 4CV Renault and the portrait of a little girl killed in a terrorist attack.   Elvis was on the TV screen in the young workers’ home where I ate at noon. There had been a terrible accident at the 24h Mans sports car race…

A soldier on leave, a youngster from the neighborhood who was serving as a paramedic in Algiers, repeated to anyone who would listen in what condition “they put the dirty arabs…” end of quote. In those days, France was “on its way to what”? It was the end of one Republic about to give birth to another, under threat, while the “colonies were imperiled”. And yet, it wasn’t for lack of “democratic” institutions, exacerbated parliamentarism, of Leftism, whether in the opposition or not, nor of active filibustering.

The French, on the way to their holidays, and the monster traffic jams also delighted the newscasters. My adolescent eyes saw nothing but the seagulls…

Does this mean France was living under fascism, that it was a dictatorship? The bodies of the Algerians floating in the Seine in 1961, the beatings in the provinces and the slums…were those fascism? And Maurice Papon, the ex-collaborator recycled into chief of police for a murderous Republic, was he a democrat in an imperiled democracy “on the way to something”?

A few years later, in 1968, this “democratic and republican regime” was shaken by a wave of protest from a youth torn between a desire for liberalism and modernity, and a refusal of the existing order exuding the repressive and normative features of the Nation-State.   That wave, of a transnational magnitude, would give birth to neo-liberalism ten years later, and drive the careers of reformist politicians born in the preceding period, while the lie fell apart in the East, giving the beautiful word of “commune” a taste of slaughterhouse blood for decades.

Capitalist globalization had its work cut out, and took on the features of national crises…

So let’s get back to Turkey.

Could it be that we disagree on the meaning of the word “democracy”?

A President orders a new vote because the populations of Turkey have not given him the expected absolute majority, while he stokes wars, outside his borders in Syria, inside his borders in the East – is this democracy? He obtains a YES for a change to the constitution that profits him and his oligarchy, out of fear and repression. Is this democracy? Lest we forget, the political ascent of this same man rests on institutional republican votes and political coups that were a specialty of the Kemalist regimes he opposed up until the heaven-blessed one in 2016…

So, what has changed?

I set aside the regional context which, of course, overdetermines everything.

The dismissals by decree, the purges, the arrests and imprisonments now affect much more than the Kurdish population which traditionallly served as the main scapegoat during the past thirty years. Which does not mean that others, considered as “minorities”, were spared. The quasi uprising of the young people, and  of older ones, in 2013, which officially caused 6 deaths and 7800 wounded around Gezi Park, indeed changed something: the feeling that State repression could extend to protests in the West and in large Turkish towns.   And this protest had partially bypassed the traditional Kemalist parties, the usual fuses and buffers. Thus, the republicans saw their own institutions lifting the truncheons and raining down State violence against them.

This is the moment to attempt a comparison with the seventies, when social conflicts and class warfare were on the rise and created a left and a radical ultra-left on the one hand, and fed a fresh spurt of ultra nationalism on the other. Following the 1960, then the 1971 coups d’Etat, the army regained power in 1980 against those one of our generals would have described as “the rabble”. Eleven successive governments occupied the scene during that period, including that of the then- social democratic CHP. This is when the Turkish ultra-left, following the 1980 coup d’état, was subjected to incarcerations and violence, soon followed by the Kurdish populations in villages and small towns who had taken the Turkish left at its word and created the Kurdistan Workers’ Party (PKK 1978). Exactions in the East marked the eighties with razed villages, exiles and the reconfiguration of towns with a Kurdish majority.

With all this, I still have not answered my own question, besides the fact that State-wise, from one to the other, repressions and reactions are partly identical. Still, Gezi did not equal the crisis of the seventies, yet the repression was not less strong nor less murderous for all that. Fascism? Dictatorships? Total absence of “democracy”, that much is certain, other than parliamentary and representative, in the framework of a Nation-State hiding its crises behind paroxysms of violence against its opponents.

For dictatorship, we find the definition: “Political regime in which power is held by a single person or by a group of persons who exercise it without control, in an authoritarian manner; time during which a dictator holds power.”

For fascism : “Fascism is an authoritarian political system combining populism, nationalism and totalitarianism in the name of a supreme collective ideal. A revolutionary movement, it is in frontal opposition to parliamentary democracy and to the Liberal State that gurarantees individual rights.”

Oddly enough, might these definitions match both kemalism and the AKP regime?

Republican nationalist friends on the left and on the right, let us meditate!