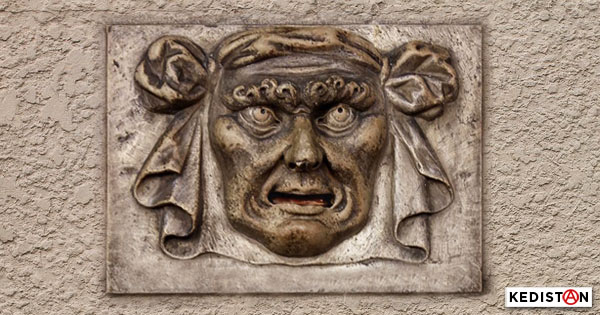 (For Eng­lish read­ers : in French, the word cafard describes the bug known as ‘cock­roach’. It also des­ig­nates a police informer.)

Today, I offered my neigh­bor flow­ers. You find that odd?
Well, I have to tell you I was only tak­ing out an insurance.

Ah ! I haven’t told you about the cock­roach­es in the build­ing yet. Let me make up for my oversight.

As I can’t make heads nor tail out of all the decrees hand­ed down by this AKP gov­ern­ment since the blessed coup, let me sim­pli­fy by say­ing that, in August 2015, Turkey adopt­ed the Far-West regime, more or less.

Here we are, all of us, turned into “boun­ty hunters”. No need to kill the want­ed per­son, all you need to do is dial the num­bers, send the emails or, slink­ing along the grey walls, make your way to the police station.

Denounc­ing a “ter­ror­ist” can guar­an­tee your old age pen­sion, if it’s a “big fish” (up to 900 000 €). But don’t men­tion it to the taxi dri­ver on your way to the police, he might dash in before you and pock­et the mon­ey. With this new fash­ion, some taxis now come ful­ly equiped with micro­phones and cam­eras. Don’t dis­cuss it with the per­son in charge of light bulbs in your build­ing either (the light bulb is the AKP’s sym­bol), he would grab the boun­ty first.

I’m talk­ing to you about this all of a sud­den because I read in one of the rags that a leader declared his sat­is­fac­tion, since inform­ers have made pos­si­ble the “neu­tral­iza­tion of at least 600 terrorists”.

All right, con­sid­er­ing the num­ber of poten­tial inform­ers, that isn’t much, and that’s reas­sur­ing. But I think of all those who had to pro­vide evi­dence against their false allegations.

Plus, it is pub­lic knowl­edge that in the files of tens of thou­sands of per­sons being held in cus­tody await­ing fur­ther injus­tice, there are “blank tes­ti­monies” pro­vid­ed by “secret wit­ness­es” who nev­er appear in court.

You may even denounce from abroad, just think of it.
You still have an eye on the neighbor’s appart­ment and he doesn’t want to sell… Ask around, maybe he had a house­keep­er with a bank account in a FETÖ bank.

Because, yes, you still need some excuse… You don’t think the gov­ern­ment would hand over the mon­ey just like that. The excuse has to have some­thing to do with ter­ror­ism… If you fol­low the ongo­ing tri­als, you’ll see that ter­ror­ism is like the teacups you put under each glass, there are so many mod­els to choose from… It’s the label you stick on those who still dare stand up or claim their rights.

I can’t resist the plea­sure of pre­sent­ing the web­site where you can go squeal but don’t expect me to pro­vide a direct link…Search around, type “list of want­ed ter­ror­ists” in Turk­ish, which is to say “aranan teror­istler lis­te­si”. You’ll come straight across it…

I clicked on the bee­hives with cau­tion, and didn’t find my name in them. But those pho­tos give you the jitters.
I can’t help think­ing that’s the whole idea. And if there’s talk today in the rags of this “Turk­ish Want­ed List”, it’s to lay on an extra lay­er of fear.

So you under­stand now… about the flow­ers I gave to my mus­ta­chioed neigh­bor on the 3rd floor. You won’t go stool on me just for that, will you?
In fact, I didn’t come back to talk to you about life insur­ance. I just want­ed to reas­sure you over my pro­longed absence.

But my big prison isn’t doing any bet­ter.