Turkey : Trashcan Chronicle from a jail under leaden skies 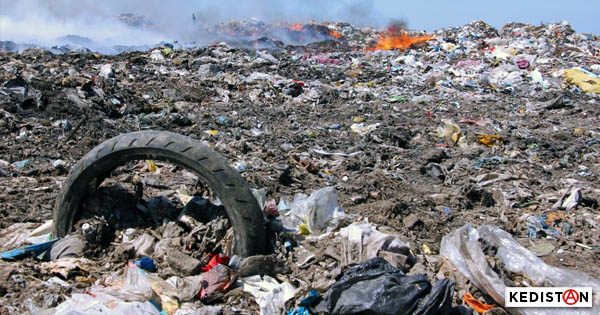 This article is not an exhaustive analysis of contemporary Turkey. Far from it. It is nothing but a series of photographs, exposed or over-exposed. Putting words in order on disturbing realities helps in feeling better. Giving them out to read, a relief.

Very freely inspired by notes appearing in Turkey on websites located outside the country. This column will be followed by others… And does not in any way exonerate European States sweeping their doorsteps clean, so shut these days against “strangers”.

Critical situations are not indispensable for the first symptoms of a society’s degradation and collapse to appear. Sometimes, reactions and attitudes concerning perfectly simple and ordinary human problems can serve as warning signals.

Today, looking at any capitalistic country, we find multiple examples of such cases. As for Turkey, the country’s present situation invites us to pay particular attention. Seen from over here, things are as self-evident as the nose on a face, and all that’s needed is the intelligence to look at it and realize the breadth of the human wastage generated by a political regime… But we must remember that, perhaps, what seems unacceptable over there, may not appear self-evident here, because of a certain type of orientalism.

In observing the comments, the actions and the political methods of its leaders, their ruling class politics, the interactions between the various factions and organizations, and repressive machinery that is the State, the content of the populist propaganda widely distributed by media and pseudo cultural organs at the orders of the regime, and their combined effect on populations, the extreme polarization of society and the rupture of social ties indicate that Turkey is experiencing a period of social and political decomposition of novel proportions in its history. In addition, the shift from a cultural to a political Islam has undermined what only a few years ago brought sesame seeds to the grindstone of European orientalism.

Let’s take a simple and very recent example : the de facto murder of two children by the police in Silopi.

Two children, Muhammet (7) and Furkan (6 ) were crushed to death in the middle of the night while they slept, when an armored police vehicle entered their home, destroying a wall. We’re not talking here of a tragic accident or of a blunder, but of the perpetuation, even the prolongation of State terrorism against the Kurds… 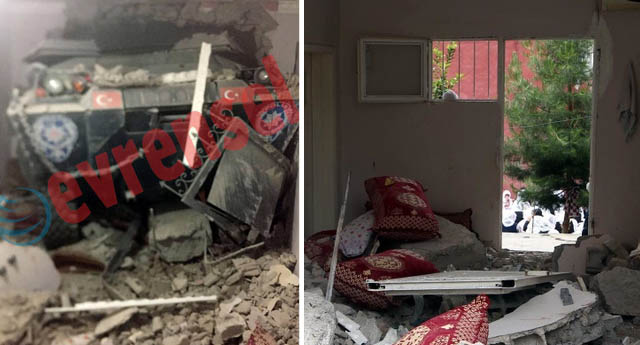 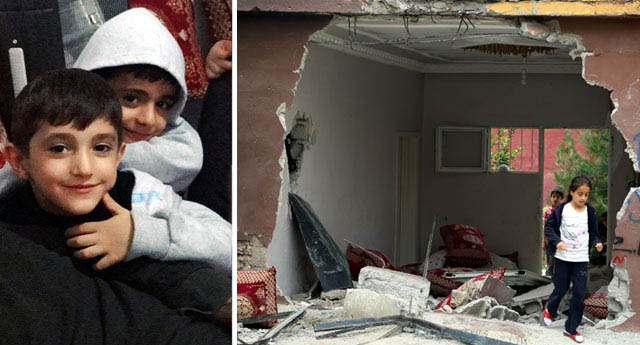 The policemen who committed the massacre continue to perform their duties, as if nothing had happened. At the same time, the person who heads the State, the one who gives the orders, churns out speeches immediately relayed by the media at his service at every turn and wherever he goes, speaking of “the rights of the poor and the destitute”, and “distributing justice”. The same media, whether allies or submissive, repeat as one the scoop handed to them by the President of the Republic, announcing that he called the father of a handicapped little girl, reached out to the family and ordered that the little girl be fitted with an artificial leg. Let’s not forget the little girl from Aleppo he sat on his knee. 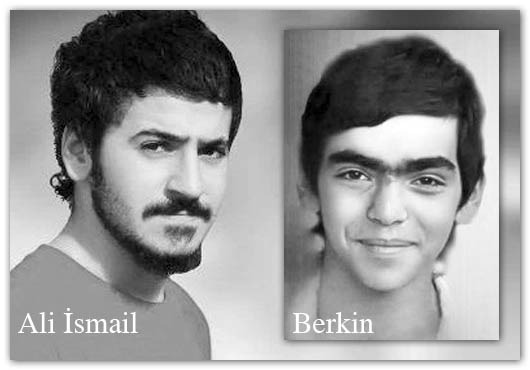 Let’s talk about Berkin Elvan and Ali Ismail Korkmaz, killed by the police during the resistance in Gezi in 2013. The first, Berkin, wounded in the head by a tear gas grenade lobbed by the police, died after spending 296 days in a coma. He was the youngest victim in Gezi. The other, Ali Ismail,
beaten to death by the police in Eskişehir, spent 38 days in a coma, before dying at the age of 19. And there were other victims during demonstrations in Gezi.

Or let’s recall Uğur Kurt killed by a policeman in May 2014. The policeman was chasing demonstrators from a gathering close to a cemevi, a place of worship for the Alevis, and shot at random in the courtyard even though he saw that there were people gathered for a funeral. Uğur collapsed in the middle of the courtyard. The murderous policeman was sentenced to a jail term of one year and eight months, quickly transformed into a penalty of 12 100 Turkish pound, the equivalent of 3000€. Uğur’s life wasn’t worth much, but the policeman refused to pay the fine and appealed the decision… 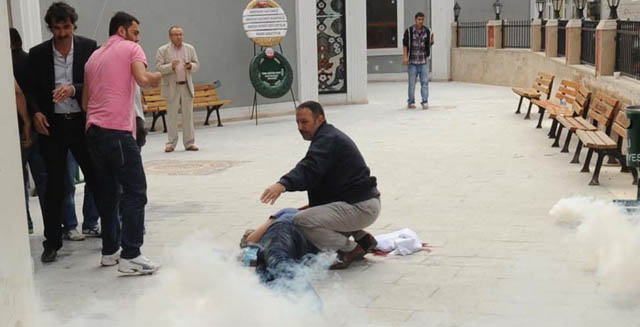 Or let’s mention all the civilians killed in Kurdish towns, without distinction, be they children, youths, women, the elderly… Sometimes burned alive in basement buildings, leaving a few remaining bones handed over to the family in a plastic bag containing a few kilos : “This is your father“.

Or again, let’s look at the destruction of neighborhoods and Kurdish towns… And the silence of half of the Western countries that carry on their daily occupations, as long as State repression, fire and blood stay with the “others” in the East and that no one comes knocking at their door…

Problems with expressing empathy, lack of humanity, failure of conscience… When those who form a society no longer build bridges but walls, walkways are replaced by minefields. Fear, indifference, hatred, all the way to denunciations out of zeal or opportunism. At the daily level, we note that the indicators of communal living register putrefaction. The newspapers brim with it. The multiplication of these events is telling. Altercations, disputes, fights, lynchings and murders that start over nothing ; a sideways glance, a word, or the wrong look, a skirt too short, or just for being “other” – Kurdish, Syrian, LGBTI…

We won’t mention yet again the brain cramming that starts at the youngest age in school. It has been a constant for decades, be it in the teaching of “history” itself, an early initiation to Turkishness, or in the use and manipulation of symbols. All this was already in place “before” what it is stylish to call the “drift”, for all this dirty water has been coursing through the same stream for centuries.

Let’s stick to the current. And let’s talk only of the media that still remain… The opinions and visions imposed on society through the messages transmitted through the media monopoly would suffice to distillate the hatred for the “other”… Let’s read nothing other than the way the newspapers and TVs celebrate the Erdogan regime’s “victory”, adding as illustration of its “success”, the number of youths killed almost every day in the Kurdish urban and rural zones…for instance. These youths who have before them nothing but a binary choice, submission and assimilation or rebellion. When they refuse to submit, how can we blame them for this choice, knowing that they have all inherited family histories filled with martyrs, and spent their childhood as witnesses of a State particularly repressive against their elders, their parents, their grandparents… Let’s talk about these youths, some whose very corpse is forbidden to their families. The dignity of a tomb, denied. 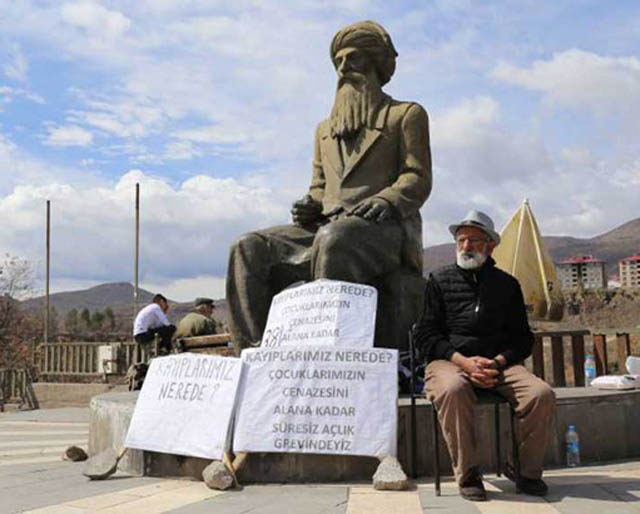 A sweeping view over the current landscape shows the same ills everywhere, from the State system to the Justice system, from the mechanisms of propaganda to the behavior of the authorities.

Work-related accidents, for instance. Mainly caused by conditions of insufficient safety, yet denied. Work-related “accidents” are in fact nothing other than “work-related assassinations“. And this is how civil society organizations call them… They represented 1970 deaths in 2016 ; for the first four months of 2017, they already stood at 586 deaths. This is without mentioning workers handicapped for life and thrown into misery with their families. Turkey holds the European record for work-related accidents. Faced with the reality of these “work-related assassinations”, pretending they don’t exist raises the social gauge level to : manifest decomposition.

This also holds true concerning violence against women and children as can be illustrated by thousand of examples where tribunals reduced sentences for authors of feminicide because they “presented well” when facing the judge, or because they’d emptied their revolver in her chest, because they “loved their wife too much”, or because the judge decided the child had “consented” to the aggression or the rape, even when these were children of a very young age, thus signing with the hand of justice the encouragement to similar acts in the future. The exponential growth of violence against women (by 1400% in 2016), the feeling of a quasi palpable virile impunity, the extremely sexist and phallocentric comments by the State (english version here) and the whole thing interacting, transformed into a fireball… This is also an indicator. And at that point the needle on the counter goes wild. 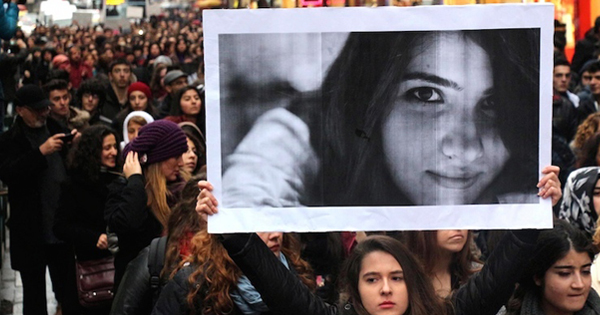 But there’s something else still…

In a society where, in principle, lying and hypocrisy are classified under the heading of “immorality”, has lying become the habitual practice, and even an element of the regime’s policy ?

For example, when in the course of a referendum campaign, those in power authorize accusing the adversaries of “treason against the Homeland”, of being “the instrument of external forces” or again of “supporting terrorist organizations”while, at the same time declaring “We do not practice a divisive policy”, and when millions of people who hear these contradictory statements don’t react… Can we talk of a “healthy” society, as they say ?

If these examples have spread to the point of penetrating most circles, whether organized or not, if corruption, bribes, the absence of justice no longer cause reactions, if State assassinations are considered by the greatest part of society as legitimate and necessary to the State’s survival, if, when the illegality of the referedum is in question, the choice of the one who will be the sole leader is presented as essential, if certain counter-insurrectional, anti-Kurdish and anti-minority Parties and organizations move forward with Erdogan and the forces of the counter-guerilla (militias from the so-called deep State, the “ervices”) are vaunted as ‘progressive Leftists’, and if nationalistic and anti-freedom individuals and institutions are counted as “democratic forces”… this means that the dimensions of the decomposition are terrible vast … 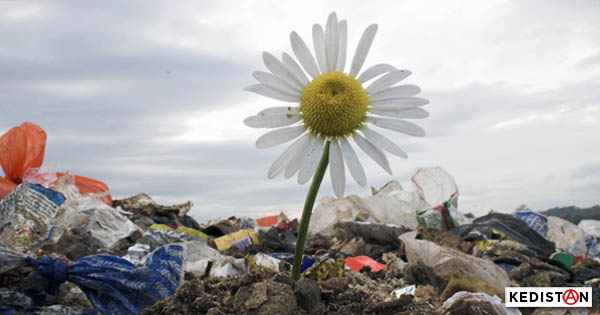 The ones responsible for this state of affairs are not the large masses of persons who consider themselves neither to the right nor to the left. What is decomposing is capitalistic society itself, in this particular context of the Turkish Nation-State. And the masses pay the price for fooling themselves or for being fooled. This will continue until the struggle against the system of tyranny and exploitation rises at last, takes root and spreads into new branches. In another time, a Yılmaz Güney called on this with all his might, against another regime, in another period of the Turkish Republic, “united and indivisible”…

What we see are the results of prejudices that have existed for decades, centuries of backward education, of the social efficiency of the dominant propaganda, of the organized structure of a State at the service of the rulers, and its hold on the structure of society.

The forces that can fight against all that are native forces, even though they are dependant on the same social structure. But they increase, from one crisis to another. Not only does history demonstrate this, but also, the fact that the struggle and the resistance are fermenting and advancing, as nearby Rojava shows the same ills everywhere confirms this reality.

This society contains the germs of its insurrection and it doesn’t know it yet.

Signing this chronicle would be the same as signing a statement…