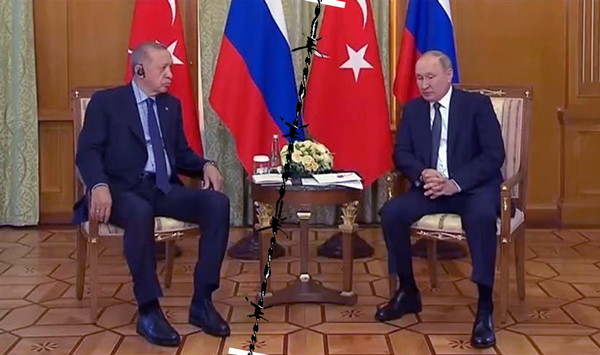 Once does not a custom make, on this Friday August 5th, Erdoğan and Putin insisted that their preliminary remarks prior to a prolonged meeting be conveyed to the media worldwide.

This new meeting in Sotchi is thus considered by the two as an opportunity to address “the world”, as well as to discuss domestic problems, energy, food, Syria…

Putin’s two preliminary remarks at first, followed by Erdoğan’s are in themselves an exercise reaching into a dimension from which current reality seems absent. We will know what the one wants to talk about with the other, but what prevails is the sketch of a theory of a great Western plot against developing countries as pertains to grain supplies, a plot thwarted thanks to the Turkish President. At last, Russia can feed the world, with Erdoğan’s decisive assistance. Apparently, according to Putin, it was kept from doing so up until that point by the unjustified Western sanctions. This theory, developed by Minister Lavrov during his recent tour does not mention of course the cause of these sanctions, nor is there any word of Ukraine. The invasion and the war do not exist. All that is handled under the  heading “special operation”. And no matter how closely you may lend an ear, Ukraine simply does not exist.

This aspect put forward in the mutual congratulations was of course aimed at the Heads of States and populations still deprived of grain exports originating in Ukraine… As a reminder, sanctions against Russia do not extend to a food embargo, and the retention of Russian grain was part of a strategy on Putin’s part, as is the case with the blackmail pertaining to gas deliveries. In fact, prior to the recent agreement,  Ukrainian grain diverted by Russia had already transited smoothly in order to feed “Russia’s friends”.

Listening to the two leaders, you might think this meeting is not about the war in Ukraine, the Russian invasion, but about other crucial matters such as energy problems and previously voiced demands on Erdoğan’s part concerning his combatting terrorism, particularly in Syria.

The political dividends of the grain agreement being covered in the preliminaries, we can then move on to what will be the crux of the meeting.

Erdoğan voiced a reminder that Turkey itself will profit from this uptake of exports. This should be at the Russia’s expense. He then returned to questions concerning energy.

In 2021, Turkey imported 45% of its gas consumption from Russia, and around 10% of its oil. It did not consider itself concerned by the European decision to refuse paying the bill in rubles.  Turkey being a member of NATO, but not of the EU.

But, on these energy matters, at a time when it was attempting to grab potential gas resources in the Mediterranean, Turkey had already signed contracts for nuclear power, and notably for the building of the Akkuyu station, one of President Recep Tayyip Erdoğan’s signature projects;  said reactors “should” be in service in 2023. ’Should be’, because the schedule on this project is showing some slippage, due to regional tensions and Turkey’s financial straits.

A reminder on the “contract” between Turkey and Russia, via Rosatom, and notably the following found in a newspaper: “Turkey will have to pay a minimum of 32 billion dollars over 15 years for the electricity produced by this station. In other words, Turkey will have to pay approximately 2 billion dollars a year to Russia solely for the station of Akkuyu, over and above what it pays for the gas.” One can imagine the Russian expectations, in these trying times, while funds for the 4th reactor are slow in appearing. On the other hand, one also imagines Erdoğan’s impatience, for the crowning of the project in 2023 –  centennial year of the Republic and expiry date for those in power.

In the name of “mutual interests”, there will be talk of Akkuyu at Sotchi.

Erdoğan’s other desiderata, unsurprisingly, concern the “struggle against terrorism” he assimilates with the Syrian question.

His demand is well-known. It concerns the creation of the famous “buffer zone” in Syrian territory where Turkey could “re-localize” an “excess” of Syrian refugees on its territory, refugees linked to the funds it obtains from the EU in order to ’contain’ them off European soil. In order to do this, of course, as those he calls “PKK terrorists” in Syria are opposed to the plan, a Turkish military incursion would be welcome without any intervening “complications”.

Here again, as a reminder, this already ancient “project” is seen favorably by a majority of the Kemalist electorate, Erdoğan’s opposition, both in order to get rid of the “Syrians” and to reclaim territories “that were once ours”.

Maintaining the belief that Erdoğan’s opposition is favorable to the Kurds is and will always remain a heresy. In its vast majority, this electorate is nationalist and only turns toward the Kurds to beg for their voices during elections, such as was the case in Istanbul.

Erdoğan would thus like to receive an all-clear from Putin for the military operation he is preparing, as he already attempted to do with NATO with the blackmail over Sweden and Finland’s joining the organization.

He hasn’t yet received the green light in the framework of the Astana agreements either. The American High Command, with good reason, sees in it a threat of regional destabilization that could lead to a resurgence of ISIS.

Putin’s change of footing on the topic would be of great importance, especially in view of two obvious facts:

Even within the framework of the Astana agreements, Turkey has been unable to carry its own share, both because of its long-lasting proximity with the Jihadist groups as well as because of its will to attack the Kurdish movement, leading to its refusal to recognize in any way the autonomous entity of Northern Syria and its diversity.

Following the invasion of Afrin and of its region, Turkey settled for reaping the benefits of the pillaging of the region’s agriculture and delegated its “administration” to the Jihadists. As a result, a humanitarian catastrophe has ensued, with the installation of a zone in which pillaging, kidnappings and rapes are common and where different factions attack one another.

Although the two leaders share imperialist ambitions, they cannot agree on this matter of international import in the course of a meeting.

And when we read, in a certain European press that they might broach the topic of “peace in Ukraine”, we wonder if we are dreaming, but mostly, we ask ourselves seriously what level of knowledge of international questions those writing such assinine statements have, or truly believe. Are we really in such a hurry to sacrifice Ukraine to European gas interests?

These two war bloodletters met in Sotchi solely to examine their mutual interests and attempt to obtain for a while longer a maximum out of the “special operation”, and not to talk about peace.