In Defence and Support for Rojava 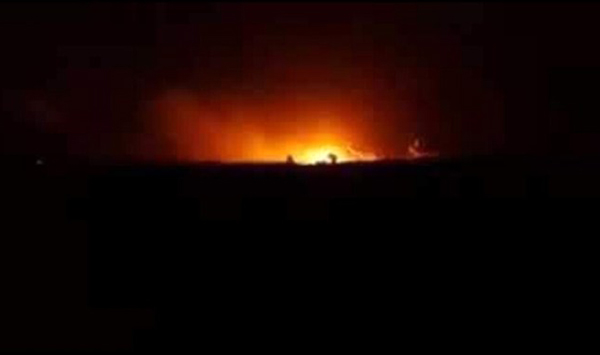 Once again, Turkish armed forces bombed border zones in Irak and Rojava, targetting populations a majority of which are Kurdish and Ezidis.

This time, it was the Kurdish refugee camp of Makhmur and the Ezidi region of Shengal in Southern Iraki’s part of divided Kurdistan, along with the region of Derik in Rojava (Northeastern Syria). According to Kurdish sources, the various strikes were carried out by Turkish fighter planes that took off from the 8th Airbase in Amed (Diyarbakır). In Makhmur, the strikes killed two people among the self-defence forces and made dozens of wounded within the refugee camp. The bombings on Shengal were devastating.

The Turkish regime used as an excuse for the launching of these attacks,  the fact the Kurdistan Labor Party was holding its annual meeting, following closely on the Turkish drone attacks while ISIS had launched its operation on Hassakah prison in Rojava.

Clearly then, there is nothing new in the Turkish regime’s strategy against the Kurdish movement, except for an escalation in « distance killings », an escalation that follows on military setbacks experienced in Irak during attempted Turkish terrestrial offensives against the PKK, along with a freeze in positions between Russia, the Syrian regime and Turkey, thwarting Erdoğan’s Syrian occupation plans  under the guise provided by the Astana agreements.

Seen from Europe, this is how what some call a “low intensity war” goes on, carried out from the air with “modern” information technologies and killer drones.

Cries for help join the homages rendered to the victims and, from the opposing side, nationalist promises of “yellow bags” for activists of the Kurdish liberation movement.

Under these conditions, it is easy enough for a warm proponent of realpolitik to send back to back the claims made by both sides,  even if this represents a kind of disavowal concerning « Kurdish forces » who were formerly praised for their sacrifices against ISIS.

European rightwingers speak sotto voce of “Turkey’s right to defend its frontiers”, in echo of their own notion of fortress-like sovereignity, and continue to factually criminalize the Kurdish movement by classifying the PKK as terrorist while judicial decisions against their supporters, expulsions or difficulties raised against the welcoming of political refugees abound.

Although still present in European media, criticism against Erdoğan does not rest on his territorial ambitions in Northern Syria and the acts of war carried out  toward those ends, nor against his genocidal intentions against the Kurdish people, but in the name of some “universalist notion of freedom” allowing for the denunciation of his “Islamism”.

Thus do we see the media’s stance of “at the same time”, echoing on the one hand judgments against and imprisonment of intellectuals and journalists in Turkey along with women’s struggles, while, on the other, maintaining a distance from the Kurdish liberation struggle. This phenomenon was most explicit while ISIS was conducting its terrorist operation against the prison in Hassakah.

Without even acknowledging it to themselves, some journalists spare Turkish nationalism, Turcity, while shouting down Erdoğan the Islamist. We were already aware of the confusion maintained by a certain “it was better before Erdogan”, or the more subtle “since the 2016 coup d’Etat”, in which Kemalist nationalism was praised as being secular and progressive, hiding its crimes under the carpet of Turcity. We are now seeing its ” sovereignist” 2022 version adapting to European evolutions.

In France, notably, where the question of Islam has become a political obsession, not only for the identitarian fringe of the ultra right but also in fractions of the left and of the governmental former-left , this phenomenon is flagrant and even has repercussions on necessary solidarity with Rojava.

Thus “combat secularity”, the hobby horse of “Republicanistic” editorialists of which Caroline Fourest is the most cartoonish, keep interfering with indispensable solidarity support initiatives. The Kurdish struggle is reduced to a fight against “islamo fascism” and the Rojava project a “secular State in the making”. Exit the unity of people in the region around a possible common project, hurray for the “peshmergas” (an Iraki Kurdish force, by the way).

In the context of the French electoral period, the pragmatism of the Kurdish movement and of its diaspora  finds some support in the political opportunism of some parties or of “media personalities” rather than in the active and sincere solidarity of progressist political strains. Confusion could still come out of it as the main winner.

Another fact renders support for Rojava complicated: a certain success in all that contributes to its isolation.

Because letting people think that Rojava, like a certain Gallic village, would possess the magical potion allowing it to resist against all, would be criminal. Quite the opposite, this political project is threatened in its very existence, nor is it an empty shell suspended over the heads of the populations screening the sky and seeing nothing but bombs in it.

The geo-political context is already a concatenation of major obstacles for an interior democratic revolution to keep on developing – combining as it does a blockade exercising a squeeze on the regime, blockade supported by Russia, attacks and maneuvers by Turkey, land barriers authorized by the Barzanists through the Iraki Kurdish entity, the “war on water”, accompanied by international disengagement.

How can we fail to understand that populations – many of which have been displaced, have encountered profound grief as a result of recent and ancient persecutions, whose multicultural character still needs to solidify, not  based on resiliences shaped by differences  but rather around mutual recognition, how can they be expected not to live in uncertainty over tomorrow and as regarding “politics” as a secondary issue?

Coming together to honor victims of exactions, honoring anniversaries of fights against ISIS, searching for a common hope around self-defence cannot permanently obliterate the precariousness in refugee camps, the uncertainties in supplies, the insecurities of daily attempts at rebuilding a life. Achieving a common action close to people with all available brains, knowledge, and know-how must be an extremely difficult task.

What the AANES confronts every day is not the eclosion of new revolutionary communes but rather the result of the conjunction of all the toxic actions from all its enemies wishing to reduce it to their mercies or to see it disappear entirely.

Such a statement does not seem like a good beginning on which to build true support, rather than the up in the clouds of self-fulfilling utopias but on the basis of what can possibly be attained, wherever we may find ourselves, whatever our respective government and policies may be.

The first action must be requiring the loosening of the stranglehold and guaranteeing by agreement the end of war-inspired flyovers of the region, along with the re-establishment of supplies, including water.

This would be achieved through an explicit international recognition of the AANES with whom all discuss hypocritically while pretending to ignore its existence.

Obviously NATO will be opposed barring fundamental political concessions to which the AANES cannot agree.

These are but the main demands repeatedly called for by the authorities of Northern Syria.

Supporting them means accepting the reality and the urgency of the situation. And there are many other reasons. It is also refusing to cover one’s face and understanding that survival of the political project, not to mention now the very possibility of its ongoing material existence,  calls not only for a propaganda-based popularization of this project.

The Rojava project was built in wartime in wartime conditions. This is the basic reality.

It would be an illusion to forget the opportunism of Nations which, in order to defend their self interests, the continuity of imperialist interests, were ready yesterday to “coalesce” against a main enemy and now, as has always been the case for over 1 000 years, refuse the emancipation of Peoples who fought for this very reason. The de facto coalition of hostile forces is a balance of power that imperils the Rojava political project wishing to provide a future to its peoples.

Thus, wherever we may be, a priority involves addressing the nation States to which we belong, without waiting for miracles, and combatting the sovereignties exercising fascistic ravages on those residing in them.

This is why, as a minimum, we at Kedistan, have signed this appeal.