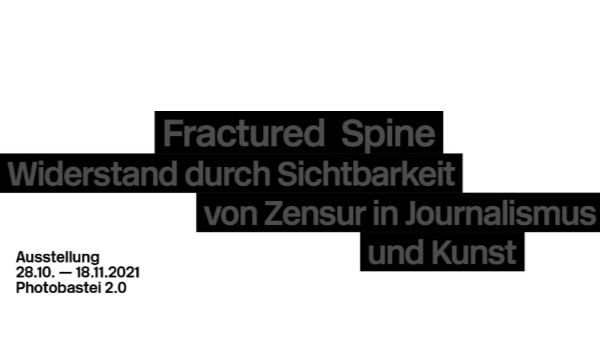 “Fractured Spine”  is a mixed media exhibition that will take place at the Photobasteil in Zurich from October 28 to November 18 2021, at the initiative and under the curatorship of Niştiman Erdede.

Under the heading “Resistance to censorship through visibility in journalism and art” the exhibition deals with the manner in which artists express specifc forms of resistance in the artistic field. The works on exhibition illustrate the theme of human rights, of the right to freedom of expression and their violations through State repression.

Art, through the direct emotional dialogue it establishes with the individual to whom it is addressed, has the property of self-transformation into a powerful tool of information and sensitization.

Initiatives based on solid concepts often arise through the involvement of one and the other, and with the contribution of networks woven, little by little, in solidarity. An exhibition can also become the mirror of a collective approach that is critical, demanding and accusatory.  This is the case with “Fractured Spine”.

Thought over a period of four years, built up step by step by Niştiman Erdede, this exhibition is the result of a determined and clear-minded intention.

The road travelled up to the opening of “Fractured Spine” is one that involves a long story.

I would like to relate a part of it, the one to which I was one of the witnesses. This wish is not as an opportunity to talk about myself. Sparks of solidarity shine on each link of the a chain which, I hope will go on stretching out toward the next one, without ever coming to an end. And this current phase, in the form of an exhibition, shows how meetings and contributions are important, even in their  humblest  forms of support.

I will not linger over Zehra Doğan Kurdish artist, journalist,activist and precious friend. She was sentenced and imprisoned for close to three years for “having trespassed beyond the limits of criticism”, according to the judge. In November 2017, the Swiss association of free thinkers, Frei Denken, awarded its Free Thinker prize to Zehra who was then in prison. I went to Zurich for my friend, with indescribable emotion and pride , in order to receive this European prize in her name, one that turned out to be the forerunner to many others…

Following the ceremony, I stepped outside to calm my emotions with a cigarette. A young man was standing near me and we started talking. This was Niştiman…

This warm exchange in Turkish, where each of us almost completed the other’s words, continued at a distance. We were looking out from the same window. The link of friendship became stronger. At the end of 2017, we began organizing various initiatives around Zehra, including one in Morlaix, around the exhibition of her prison works. Still in prison at the time, Zehra Dogan became an opportunity to meet again. A round table about art brought together Niştiman, along with activist artist Gianluca Costantini and Elettra Stamboulis, an independent exhibition organizer and author of graphic strips.

I will always remember Niştiman’s words when he emphasized an important  topic. “I believe two things drive the artist. Emotion and motivation. Motivation encourages the artist to move forward and succeed. As for emotion, it is linked to culture, to a people, to a History of which the artist is an integral part. When the artist is guided solely by motivation, he or she moves toward personal success. And, unfortunately, the place in which he or she will find recognition will be the art market, on which the West holds a monopoly. Personally, I feel like a small bit of the soils on which I grew up, a cultural molecule in the struggle that forged me. For that reason, I’m driven by emotion and that is what leads me to action. For me, there is something that must be raised high through art, and that is the testimony of the culture and the History that feeds it. This is why I do not want to act solely from motivation and thus become the monkey of art markets, on which I hold a very critical outlook.” These words led to much reflection in the audience. Following the round table, the exchanges continued. For what was precisely at stake was that balance which is not always apparent in the “career” of all artists. A precious equilibrium…

Through these renewed meetings with Niştiman, the meeting with Elettra and Gianluca, the circle of friendship widened, as did the solidarity network. In fact, since then, one like the other have been involved in various initiatives. Today, Gianluca continues to denounce, to support artists, intellectuals, authors from various parts of the world, notably singer Nudem Durak, journalist Nedim Türfent, both of them Kurdish and imprisoned… Elettra has taken on the organization of exhibitions, round tables and conferences in Italy, or yet again, the publication of books by Zehra Doğan who, now free, brings her support to other “political hostages“. And all this is part of a whole that informs, questions, leads to reflection and sensitization through art. The efforts of one and of another can become waves of solidarity, providing a collective lifet, thanks to the will, the sharing and the contribution of people around us at “human level”, each in his or her own way, with his or her know-how, availability, generosity. You who read these lines are a part of it…

Niştiman Erdede, the initiator and organizer of the exhibition, was born in Diyarbakir in 1979. Decolonialist artist, freelance radio journalist and writer-designer he moves and works in Zurich where he arrived in 2008 as a political migrant.

He left Turkey following a first provisional detention for his political involvement. It took six years for his asylum request to be accepted in Switzerland, allowing him to lead an active life as an acknowledged refugee. Between 2010 and 2014, Erdede participated in a collective set up by refugees; an association of the Zurich Autonomous School (ASZ), of the artistic training Institute of the Zurich Superior School of Arts ZHdK and other artistic institutions. Always under the status of an asylum seeker, he applied to the ZHdK, was accepted and studied in the Department of Art & Media between 2013 and 2016. At that time, Erdede was already reflecting on the relationship between history, memory and emancipating action in the context of the movements emerging from involuntary emigration.

Understanding his work is also a matter of exploring the possibility of making visible one’s own experiences of denial of freedom, as well as collective experiences, be it through writing or the practice of de-colonized art.

For “Fractured Spine,” Niştiman shares his initiative’s intention and objective as follows: “To what extent can art and art exhibitions inspire a critical reflection on political and social processes? The exhibition and the program aim at creating a discursive reality currently unknown, not only by most people in Switzerland, but also in Turkey itself. In the same manner, the exhibition contributes to a sensitization and an improvement to the situation of human rights in Turkey.”

The choice of venue for the exhibition is not accidental. “Fractured Spine” is held within the walls of Photobastei whose objective is “to render visible photographic creation and its enormous artistic potential between spaces outside-the-walls, on the one hand, and established institutions such as galleries and museums on the other hand.”

This initiative is enriched by a program the details of which you can find on the website migrart.ch/ fractured-spine. Films and videos, performances, discussions with artists will all be an integral part of the exhibition. Niştiman considers this aspect as “putting the emphasis on censorship, art and journalism with the following questions raising deep reflection: what does freedom of expression mean under an autocratic regime? How can freedom of expression be exercised in the institutional framework of an exhibition?”

I wish to note I will be participating personally in Kedistan‘s name, from October 28th to 30th, with a round table scheduled on October 31 at Photobastei 0.2 at 2pm, including Elettra Stamboulis and Gianluca Costantini, once again, in order to discuss activism and solidarity through art and collective initiatives. (Hours and dates to be announced shortly).

Two representations as part of the supporting program will take place in the Citykirche Offener St-. Jakob with the following presentation: “An important cornerstone of the work at Citykirche is its commitment to supporting refugees who, still today, suffer various forms of discrimination in our wealthy country. Many of them do not receive German language classes paid for by the State, are not allowed to work, and sometimes live in extremely precarious and confined conditions. We regularly attempt to protect refugees from the threat of expulsion in a church asylum.”

Niştiman concludes: “Along with my personal references, I am concentrating not only on local and international positions, but also on positions and debates in Turkey. Exemplary works by artists who were censored are testimony to this. Fractured Spine intends creating a space in which artists regain their freedom of opinion and speech.”

And he provides a closer presentation to a few of the artists contributing to this project:

The artist and journalist Zehra Doğan is co-founder of the press agency directed exclusively by women, JINHA, since forbidden, bringing to light the political conditions and daily life of women belonging to ethnic minorities in Turkey. She was imprisonned for her critical contributions against the system. 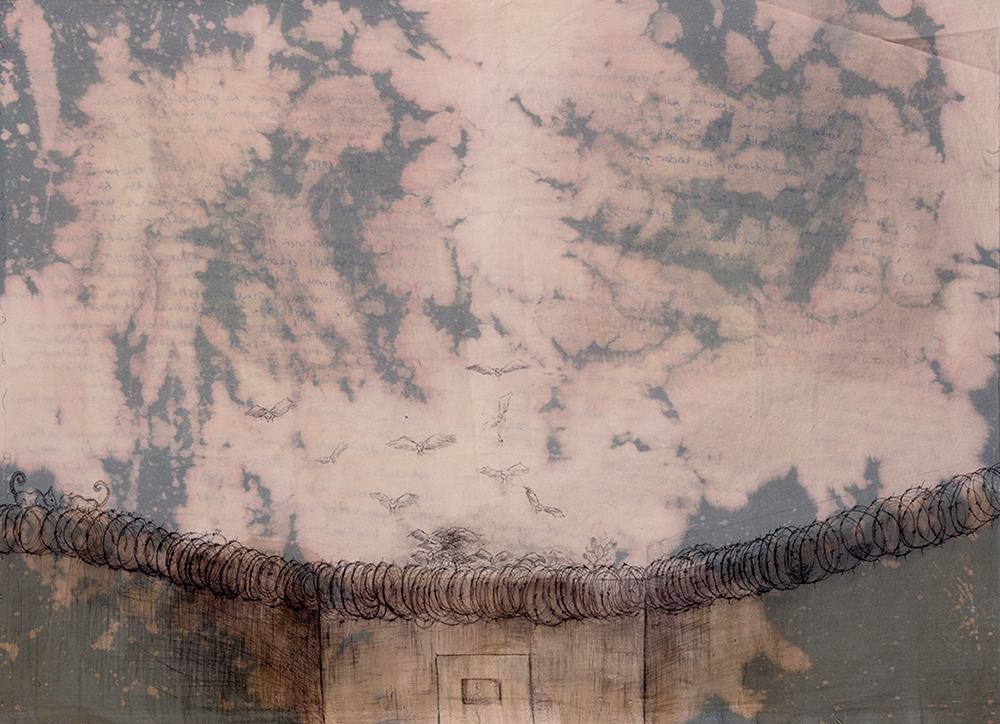 !Mediengruppe Bitnik show “Delivery for Mr. Assange” . In 2013, Bitnik sent Julian Assange a parcel to the Ecuadorian embassy in London – like a “ping from the real world” and a test of the system. The parcel was equiped with a camera that documented its journey through the postal sysem and published the images in real time on Internet. The contribution by !Mediengruppe Bitnik shows in an exemplary and clear-cut way that solidarity is possible through the angle of artisic work and that freedom of expression is a world-wide challenge. 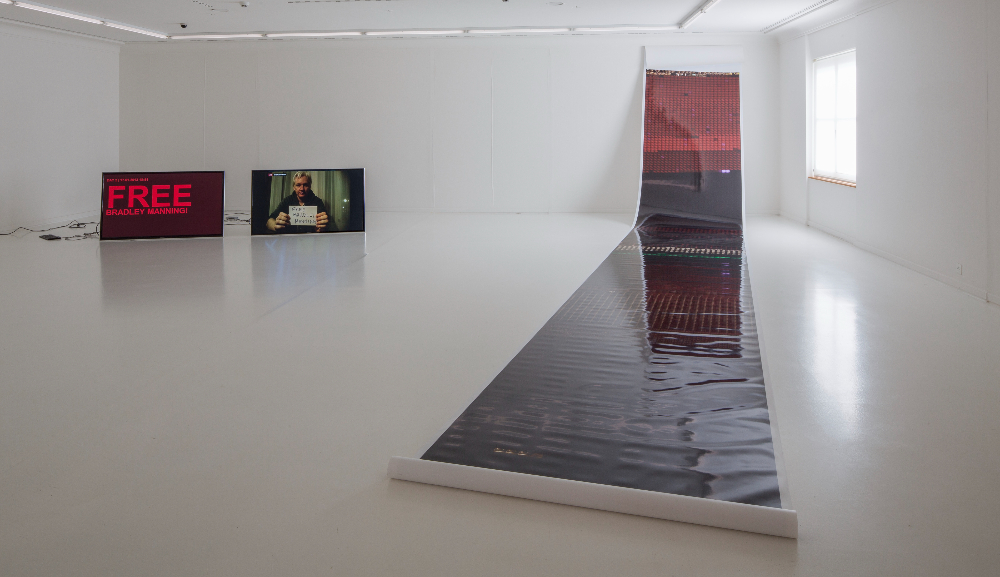 belit sağ‘s work dissects the complex links between image production and ideology, visual habits and standardization. In an interview titled “my camera seems to recognize people” in the framework of the 2nd Biennial of Contemporary Photography in Mannheim-Ludwigshafen-Heidelberg  in 2017, she declared: “As someone with a past as a video-activist, and involved in an artistic activity nowadays, I keep on moving in the grey zone between the two.” 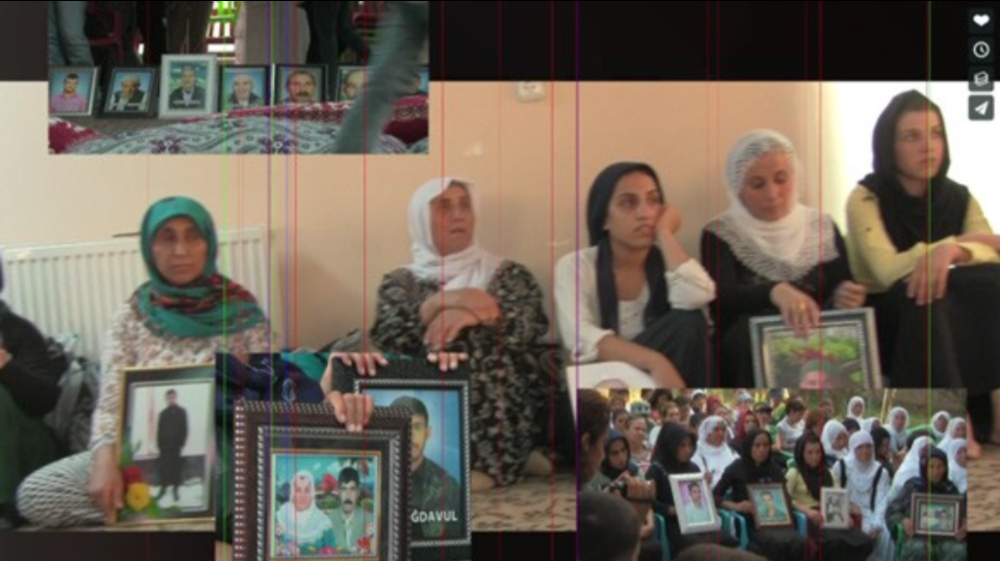 Gianluca Costantini self-describes as an activist artist. Although involved almost on a daily basis with the evolution of human rights in a number of regions in the world, Turkey occupies a special place in his work. He considers Istanbul as his second home. Since the demonstrations in Gezi park in 2013, he has dealt almost exclusively with important events in the country involving current violations of human rights. 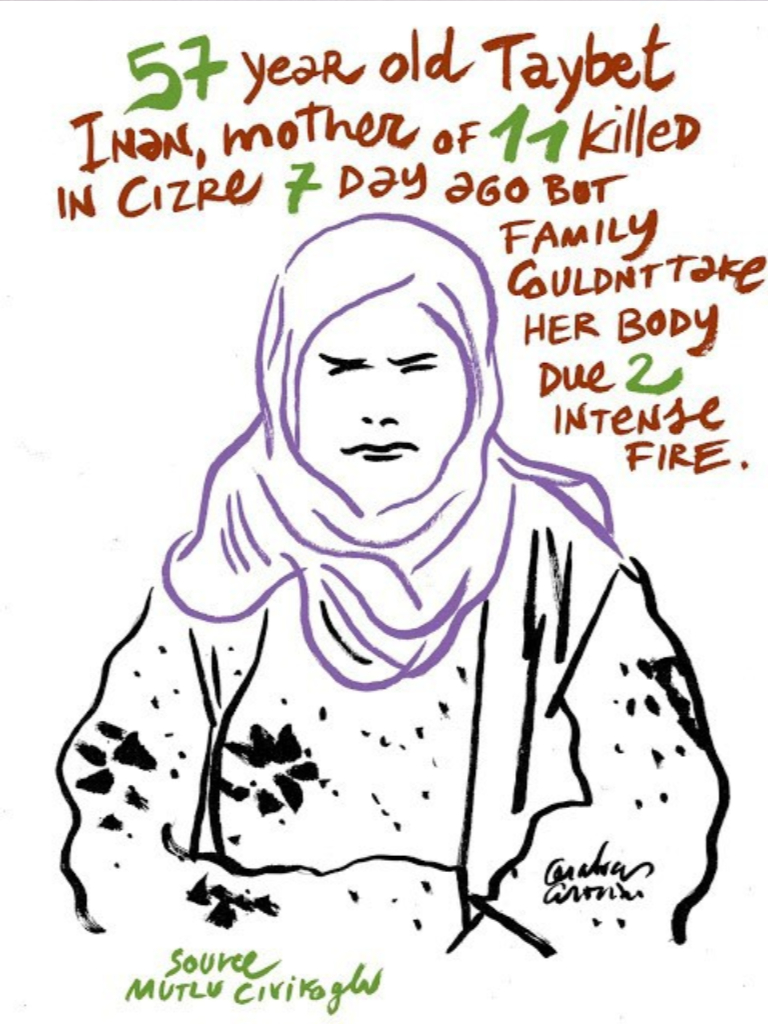 Manuela Hitz, a young artist from Zurich, is also part of this project. Her work shows great sensitivity and aims at throwing a different and novel look on the topic. 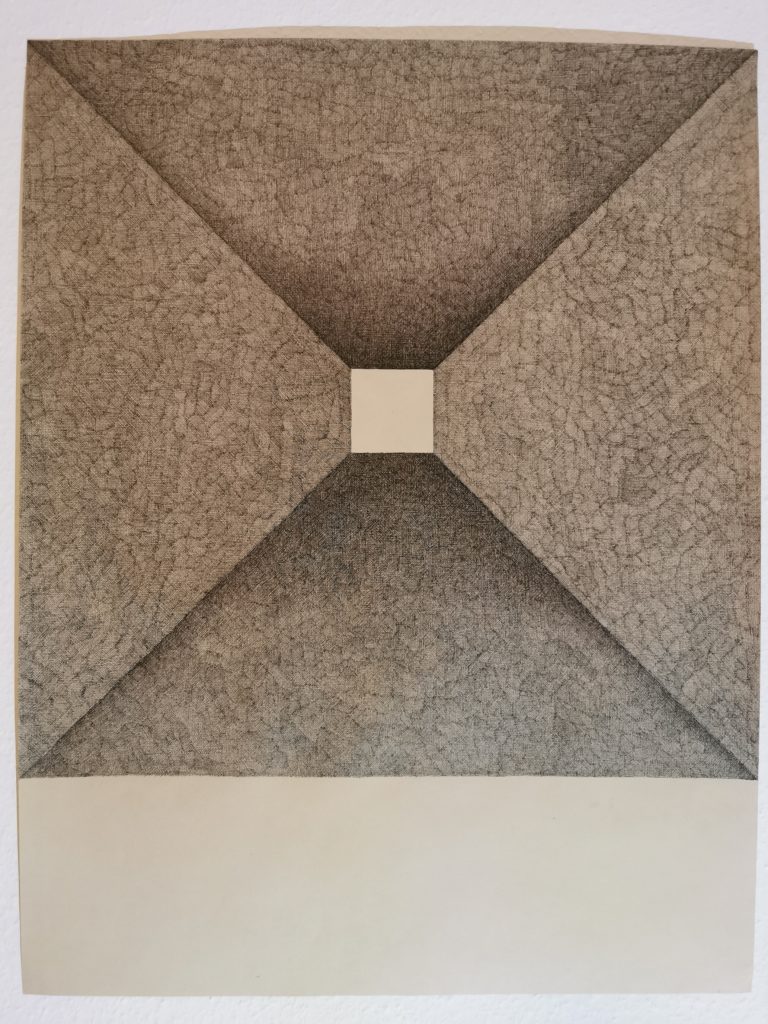 An exhibition worth seeing…