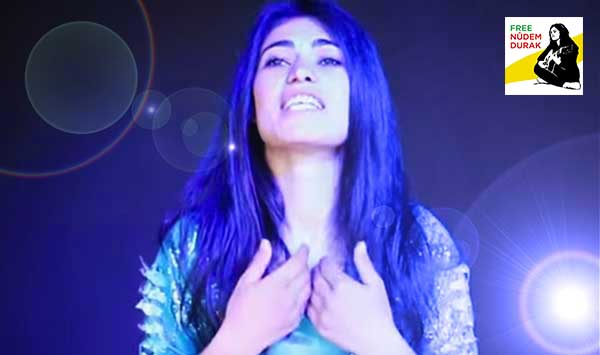 Arrested in July 2016, I spent exactly 141 jours in Mardin prison, while awaiting judgment. That same year, in August, a traditional Kurdish newspaper Özgür Gündem, to which we are all attached, was closed down by decree following a raid.

The newspaper was already surviving as best it could under censorship and repression, and the authors, journalists, a waiter such as Aslı Erdoğan had come to its support. But there was nothing to be done, the regime ordered it shut down and proceeded to the arrests. Following this, people were sentenced for “propaganda”.

We had heard of this in prison, in our cellblock in Mardin. It had made us angry. And that is how was born “Özgür Gündem – Geol” , with the thought : “since the journalists are in prison, let’s make prison newspapers.”

This was not the first time that prisoners created newspapers in prison. There were a number of examples of this during the years of repression from 1980 to 2000.

There, Mardin, it so happened that I had access to my drawing materials and, notably large sheets of wrapping paper, something that was denied to me in my subsequent years of imprisonment.

With a few volunteer co-detainees, pencils, ideas and a number of shared talents we pencilled out the first edition. All done by hand. And not one page, mind you, but eight for our first edition of which we were very proud.

This feeling of having worked together with the sensation of having gone beyond a prohibition almost gave us a feeling of liberation and, mostly, boosted our morale. One had written the news, another reflection pieces, poems, another some recipes, advices…Each one drawing on her skills. I for one also illustrated the issue. There was a second one.

These newspapers are now exhibited in various countries as unique pieces illustrating resistance in Turkish prisons. 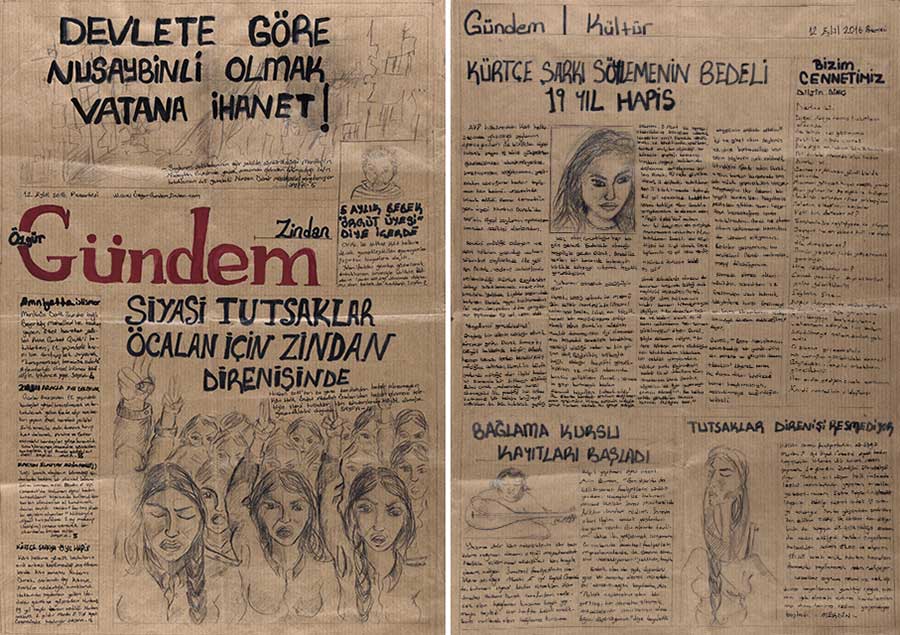 But if I am telling you this, it is not so as to speak about myself.

A prisoner who was also detained in Mardin at the time, and who is still incarcerated now but in the prison of Bayburt, also participated in the creation of this newspaper which was a way of thumbing our noses at the penitentiary’s administration. And I know that a mobilization in her favor is ongoingin   France.

This prisoner’s name is Nûdem Durak. She is an artist, condemned for having sung and made other sing in Kurdish, just as I was condemned for… a drawing.

I had also written an article relating her story for the  Özgür Gündem – Geol edition.

Nûdem Durak was sentenced in April 2015 to ten and a half years of prison. As police later said they had been searching for her since 2014, her sentence was increased to  19 ans in 2016, without the benefit of a further trial.

This small testimonial for Nûdem is the expression of my total support for her, support I add to all the voices speaking up for her liberation today and for all the other political hostages in Turkey; to some, this may seem like a useless gesture. But, believe me, when you are inside, the fact of not feeling that you have been forgotten, receiving signs of support, mail, knowing that outside, some are thinking very hard about you, helps tremendously in resisting inside. 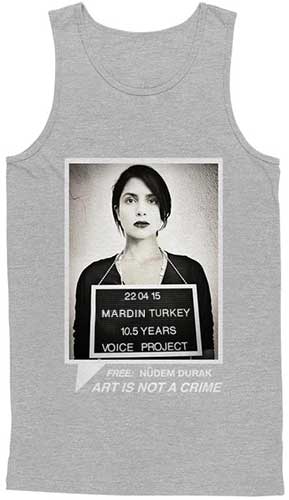 In these days of coronavirus, of course, the penitentiary administration takes advantage of the situation in order to isolate the prisoners even more by denying them access to their mail.  Save it for better days, to avoid having them throw it away, but take note of the address. Under confinement, you have plenty of time to write.

I know this is not the first campaign on Nûdem’s behalf.

For example, Pussy Riot Nadedja Tolokonnikova, who spent two years in a forced labor camp herself for having sung a song, came out in her defense and singers have sung for her.

That a new campaign was undertaken as because of Covid-19, discussions in Turkey were underway concerning the eventual liberation of prisoners was important.

Even if that discussion ended with the exclusion of all political prisoners from this measure and if only mafiosi and rapists were let free, we must not lose courage, especially during this isolation period.

My tanks to one and all.

Here then is the article that I had written about Nûdem for Özgür Gündem – Geol.

The price of singing in Kurdish: 19 years in prison

With the AKP government’s genocidal operations against Kurdish populations, the number of political prisoners has climbed to 9 thousand. From journalists to academics, from artists to health workers, from the elderly to the children people from every social strata are locked up in prison. Nûdem Durak, the young singer from the group Koma Sorxwin is one of those who have received their share in the genocidal policies undertaken.

Nûdem who devotes herself to music and who expressed the sufferings and persecutions of the Kurdish people in her melodies was arrested for having sung en stage, in Kurdish, and she is now in prison.  Nûdem, incarcerated for close to two years now, was judged in two different trials under the same accusations and was sentenced to  19 years in   prison.

She accomplished her dreams

Born in a family of  dengbêj* [bards], Nûdem grew up in Dêngül, in the district of Şırnex (Şırnak in Kurdish). Every member of this family is involved in music. Her interest in music appeared at a young age and over time, it became a true passion. As a child, her first artistic practice was playing on the instrument she had made by fixing a wooden handle on an empty box of halva, and adding a string. Nûdem spent her childhood waiting for the day when she would go on stage. She accomplished her dream by taking to the stage with her father, during a concert in Amed (Diyarbakır in Kurdish).

She bought a guitar by selling her mother’s wedding ring

In 2009 she began working at the Mem û Zin cultural center.  Nûdem’s ultimate dream was to own a real guitar. Her family had very limited means, so she sold the wedding ring her mother had given her and…bought a guitar. This is how she accomplished her dream, progressed musically and soon started putting a group together.

The first group she put together disbanded. But  Nûdem continued giving concerts during events such as March 8th celebrations with a new group she had founded, called Koma Sorxwin. Oppression against her grew and so did the threats.  Several investigations were opened against her for having sung and having spoken in Kurdish.   Nûdem was placed in custody ten times, and arrested on three occasions. With the three arrests, she spent a total of one and a half years in prison. She is then liberated (under judicial review) during her trials. Her sentences after the two trials under the accusation of “belonging to a terrorist organization” are confirmed by the Court of Appeal. She is sentenced to 10 and 9 years in prison, thus a total of 19 years.

The price for singing in Kurdish is 19 years in prison

Nûdem continues singing nonetheless, even if she is not on stage, to the accompaniment of a saz she found hidden between walls, and says her passion for music is unquenchable. “Even if I am limited by these walls, I will always pursue my work”, she says, and she adds “I was arrested solely for singing in Kurdish. I was judged unjustly. For me, the price of singing in Kurdish was 19 years. I sang all my strand (Kurdish songs) about Peace. And I will continue the same way. This people really needs peace and serenity.”

(*) Dengbêj : In Kurdish “deng” means “sound” and“bêj “ is the verb “to say”.  Thus, the  dengbêj is the one who says the words in a harmonious way, the one who brings sounds to life. Traditonally, the dengbêj who lives by moving from one village to another, is a precious vehicle for the oral Kurdish literature. He “says”epics, stories, “kılam” (words, prose, poem…) and sings“stran” (song). Most dengbêj use nothing but the human voice, a few of them accompany their voice with the sound of instruments such as  « erbane » (daf) or « bılur » (a kind of kawala or flute). The dengbêj covers a wide variety of themes, from heroism to injustice, from the beauty of spring to the joys, love and pleasure, but also the sufferings.