Turkey • Students under the stars 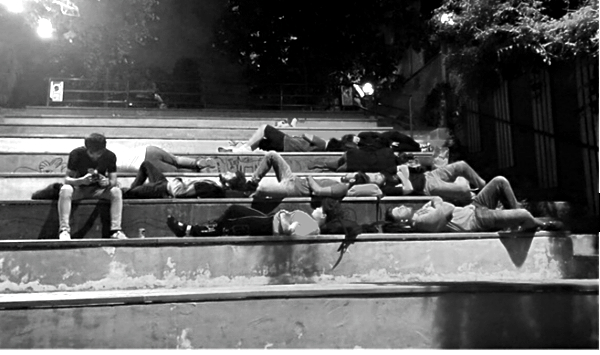 With the onset of the  back-to-school period, students in Turkey find themselves in a rough spot concerning housing. Added to the insufficiency of public homes, unimaginable inflation, an outlandish rise in rentals and the closing of private homes because of the pandemic, there is currently a huge insufficiency of available housing for students.

For several days now, hundreds of youth have occupied parks in a number of towns in Turkey, spending their nights there in protest. This has given rise to the Barınamıyoruz Movement and the hashtag #Barınamıyoruz, literally: “we can’t find housing”…

A small sample of the many photos shared by the movement.

Erdoğan recently responded by announcing that, over 20 years, which is to say from school year 2001/2002 to 2021/2022, the number of available beds had risen from 180 thousand to 750 thousand. The President did not mention the fact that the number of students had also shown a strong increase.

At the opening of this school year 815,365 students registered for university studies. A total number of 3 million 800 thousand youths attend secondary schooling. Public homes represent  a total of 793 thousand beds which is clearly insufficient. Moreover, there are currently 4, 500 homes, privately owned or belonging to foundations. Prior to the pandemic, there were 6,000 but 25% have shut down due to financial difficulties.

Yet no house, nor home…

Recently, photos of the  “apartment’s” offered to students circulated on social networks. Rooms the size of closets, containing a bed with no window, often in a pitiful condition… at outlandish prices. 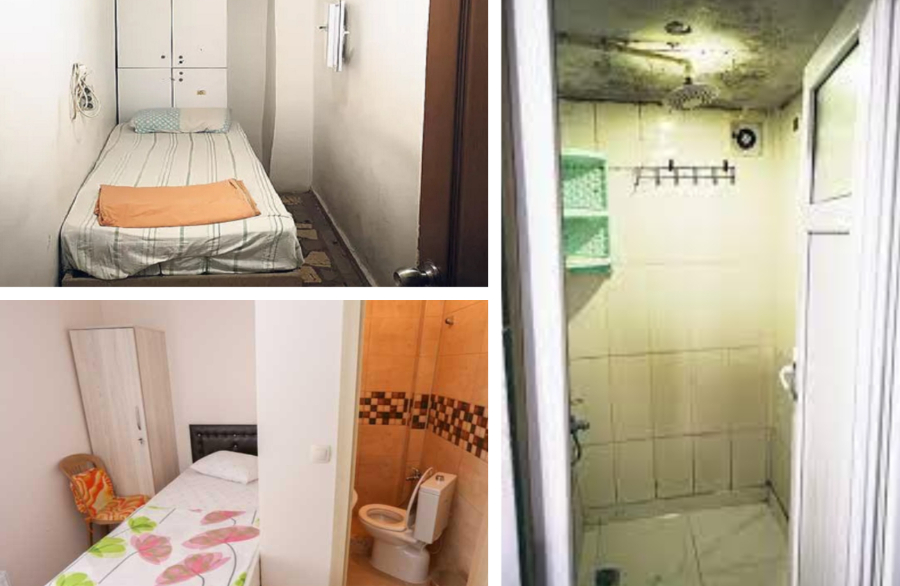 Turkey has a “KYK bursary” 1KYK: “Kredi ve Yurtlar Genel Müdürlügü” General Directorate of Credit for Homes, tied to the Ministry of Youth and Sports for student lodging. This year, the bursary represents a monthly amount of 650 Turkish Lira (equivalent to 62 €). Recipients of the bursaries are housed in homes and pay approximately 450 TL in rent. In other words, the State gives with one hand and takes back with the other, with no concern over how young people must survive on 200 TL, approximately 20 €. 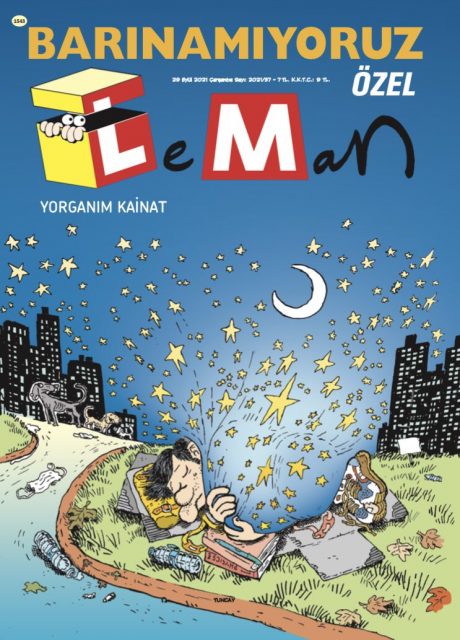 Front page on the satirical magazine Leman, September 29, 2021. “The universe, my comforter”.

Those who had “the luck” to access public homes also denounce the unhealthy conditions and psychological effects, notably in matters of freedom of thought and expression…Following in the regime’s footsteps, for example, most of the homes must have a psychologist on staff, and offer the students imams affected to this role.

The students are calling for practical solutions: construction of new homes, but also a ceiling on the cost of rentals for students, a rental allowance, inspection of private homes, the requisition of homes maintained by religious sects and the possibility to study without wondering every day “where will I sleep tonight, what will I eat tomorrow?”

“I can’t believe I’m protesting for university housing in 2021” reads one placard. “While skyscrapers transform the cities, Toki buildings  keep appearing 2 The Administration responsible for the development of social housing, is it so hard to build housing for students?”

In Istanbul, in the Kadıköy district and in Izmir, the police intervened again on September 27. Some fifty students in Istanbul, and some thirty in Izmir were taken into custody. “Is sleeping in a park a crime?” some of them asked…

Following the arrests, the Minister of the Interior Süleyman Soylu did not miss the opportunity to speak out…Anadolu Ajansı, the regime’s official information agency served as relay: Soylu announced that “2,243 persons participated in actions in 24 towns. Only 310 of them are students. Almost none of them have requested a bursary.” And he concluded: “It has been revealed that these belong rather to marginal leftist groups. Six of them are members of the PKK/KCK, six of the MLKP, five of TKKÖ, two of TKP Ivilcim, one of FETÖ/PDV, one of TKIP, one of DKP, and four members of LGBTI who love me very much.”

To summarize: all terrorists.

“The Law is what distinguishes us from terrorist organizations and vandal structures,” Soylu specified.

Without omitting a small dig at external forces so jealous of the formidable New Turkey and who live only to destroy it: “Do not take the West for a temple”, he says… 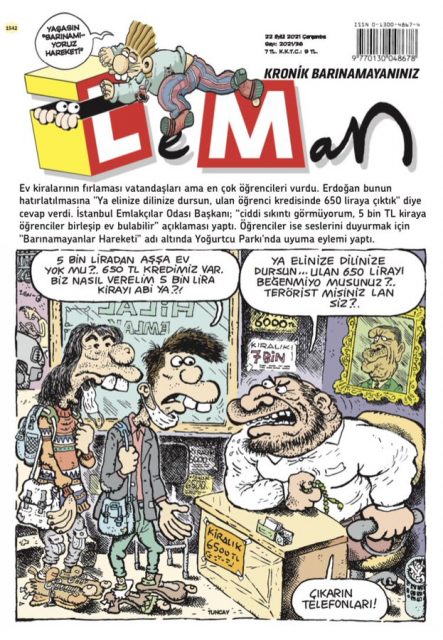 Here’s another front page on Leman, supporting the students… It was published last September 22, prior to Minister Soylu’s words…
– No apartments for less than 5 thousand lira? We have a 650 lira bursary. How do you expect us to pay such a rent, brother?
– Never satisfied! You look down on 650 lira ? Are you terrorists or what?..
(Click to enlarge)

When Soylu addresses students by mocking their attraction for the West, he kicks the ball to the opponent, because he knows full well that, concerning lodging and conditions for higher studies, neo-liberal policies have reduced students to precariousness. Nor is he unaware of the exhorbitant cost of family loans in the United States. He can thus surf along in branding the “infidels” who can’t do better, and the western mirage. By thus relativizing the matter, he attempts to hide the fact that the students  denounced the globality of the economic crash when outlining their living conditions.

Might this “nights under the stars” movement crystallize beyond student ranks?

Youthful forces in Turkey are eruptive. This was already apparent when the regime nominated university leaders, in a widely contested move. Youth is also a political issue over which the regime and the Kemalist opposition wrangle. Could this current issue turn into a long-lasting one the “opposition” might cultivate?

Doing so would considerably reduce the preoccupations of young students, covering “mandatory military service”, representing an exacerbated form of nationalism,  issues of freedom of expression, including demands by LGBTIs and those of feminists, among other thirsts for emancipation on the part of a majority of  youth that does not support the Eternal Turkey based on this absolute patriarchy.

The fact the Minister of the Interior personally responds to this protest demonstrates the AKP regime’s nervousness  when faced with any topic of protest, while arrests, and the taking into custody of journalists or opponents continues on a daily basis, as do the endless trials in the background.

The students under their “starry comforter” are determined to continue their action. You can follow development, support them, by subscribing to the Twitter account of Mouvement #Barınamıyoruz sur @barinamayanlar.