Boğaziçi • An open letter to the 12th President of Turkey 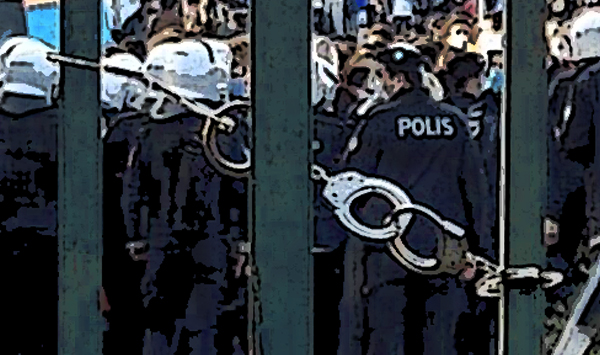 An “open letter to the 12th president of the Republic” started circulating last Saturday in several languages. Here is the English translation.

Open letter to the 12th President of Turkey

Previously, we responded to Melih Bulu1Recently appointed Rector of the University of the Bosphoruswith the poem ‘Satirical Attempts on a Provocateur.’ It is pleasing to see that you have acknowledged yourself to be the person responsible, and responded accordingly.

Up until today, you have demanded secret meetings with us via the Turkey Youth and Education Service Foundation (TÜRGEV). Now, you are trying to start an argument against us through the media. We do not like go-betweens, we prefer speaking outright and explicitly to all. We hope that you will proceed accordingly.

First, let us remind you of our demands and of the reasons underlying our protests:

You appointed a trustee rector to our university with utter disregard for the students and faculty. Is what you did legal? Yes, as you like to mention every chance you get, but it is not legitimate. This appointment makes anyone who has even the tiniest sense of justice revolt with indignation.

To top it off, you open faculties and appoint deans with an overnight presidential order on a Friday night, in order to intimidate the whole institution with all its students, teachers and laborers. Your attempts to pack our university with your own political militants is the symptom of the political crisis that you have fallen into.

Victims of your crisis grow in number with every passing day!

We use our constitutional rights to make people from all segments of society aware of the injustices we are subjected to. These are our demands:

All our friends who have been arrested or detained in this period must be released immediately!

All campaigns to defame and disenfranchise LGBTI+s and all other targeted groups must end!

All government-appointed trustees, starting with Melih Bulu, who instigated all these arrests, detentions, scapegoating campaigns, and threats, must resign!

In universities, democratic rectorate elections must be held with the participation of all constituents of the university!

Do not mistake us for those who obey you unconditionally. You are not a sultan, and we are not your subjects.

But since you mentioned courage, we shall also respond to that briefly.

We have no immunities! You, however, are the one who has been storming around, hiding behind your legal and political immunity for the last 19 years.

The Interior Minister is spreading lies to play on religious sensitivities. We say that we will not practice self-censorship.

You call LGBTI+s deviants, we state that LGBTI+ rights are human rights.

Members of your party kicked miners in Soma. We actively stood in solidarity with the mine workers, and we will continue to do so.

You unlawfully keep the Co-Chairs of the Peoples’ Democratic Party (HDP) [Selahattin Demirtaş & Figen Yüksekdağ] imprisoned, alongside journalists and union members. We declare that we stand united with those who fearlessly speak the truth, and we are against all government-appointed trustees.

You make crowds boo Berkin Elvan’s mother in rallies. We declare that we stand with Berkin Elvan2A 15 year old boy killed in 2014 by the police during Gezi’s mobilisation..

You target and attack Ayşe Buğra, without even mentioning her name, saying ‘Osman Kavala’s wife is among these provocateurs’. “In a vulgar manner, you restate the sexist fallacy that the only significant feature of a woman is her husband. We state that ‘Ayşe Buğra is a dignified professor and an esteemed academic’. We say that ‘We will take any charge against her as a charge against us’.

We know very well that you will file dozens of lawsuits against this letter on the grounds that it praises crime and criminals or insulting the president, but we also know that we will never give up on speaking the truth!

Since you lack the power necessary to keep the trustee-rector you have appointed in the office, you resort to petty tricks like opening new faculties and appointing sham personnel, which does not appear to be an act of courage.

That is why we disregard your words about courage.

If you were ever going to resign,

You would have resigned when Hrant Dink was slaughtered!

You would have resigned when 34 Kurds were killed in the Roboski massacre.

You would have resigned when 301 miners were murdered in Soma!

You would have resigned after the Çorlu train derailment!

You would have resigned in the face of the livelihood problems of thousands of citizens, who were left unemployed or could not find a job, and especially in face of the decree-law (KHK) purgees!

You would have assumed responsibility for the economic policies which condemned the people to poverty, instead of sacrificing your son-in-law3Berat Albayrak – Minister of Finance, on November 8, 2021, he suddenly announced his resignation on his Instagram account.

The examples are plenty, but you have never resigned.

You preferred to present yourself as naively deceived, instead of, in your own words, ‘having the guts’.

So now why would we call on you to resign?

As long as Melih Bulu sits on that seat, we will continue our protest by strengthening our struggle, with all those who join the resistance.

Whether or not you do what must be done is your own business.

We stand with those who are robbed of their democratic rights and freedoms.

With hopes that you realize that you cannot silence the oppressed of these lands by shouting and threatening from arenas and podiums.

Support for the ones resisting at Boğaziçi keeps on increasing: students and teaching staff in other universities in Turkey, but also in other countries, civilian organizations, corporative groups, male and female politicians…

On February 8th, a second message of support was shared.

This Solidarity for Boğaziçi is signed by 147 writers among them those you often come across on Kedistan ; Aslı Erdoğan, Murathan Mungan, Murat Özyaşar, Nurcan Baysal, Vecdi Erbay…

We will not look down

We are watching with regret the unlawfulness and pressures faced by students, faculty members and university staff who exercise their constitutional democratic right of appeal against the trustee appointed to Boğaziçi University.

The “look down” order given by the police to students who exercise their democratic rights clearly reveals how the government, which does not allow the nation to have its own will, want to rule the country and what it understands from citizenship.

Hate speech used by the highest public authorities, the labelling of students as terrorists, unlawful detentions and police violence are new evidence that our country has long moved away from being a constitutional state of law.

We see that those who have resisted for days take the burden of dead words, revive language, erase the rust of domination, and open roads full of possibilities in front of the country. As literary figures, we join this moment with enthusiasm.

We stand by the resistance at Boğaziçi University.

We will not bow to persecution and oppression. We will not look down.

As for Melih Bulu, the rector who had strings pulled for him at Boğaziçi, support for him arrived no later than on February 7th from Alaattin Çakıcı, a leader of a organized crime group, recently liberated, in a letter of support published on his Twitter account. He prays Bulu to keep his post: “Please, don’t quit whatever you do…” . Nothing surprising about this, in a Turkey in which can be observed a cartel phenomenon (oligopol) of hegemonic dimensions, as explained by Hamit Bozarslan in a recent interview.