Briançon region • Defending a space of solidarity and hospitality 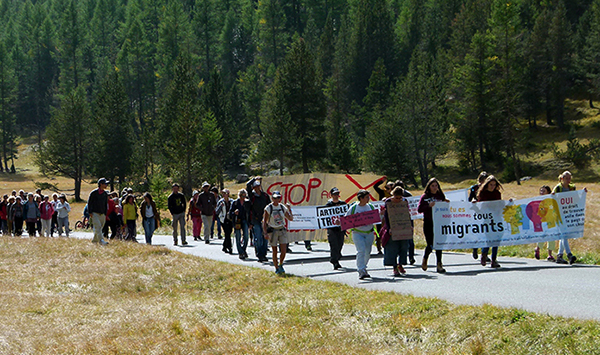 September 2 2015. Across the world, surges of solidarity occur over the shock caused by the photo of a small Kurdish boy, drowned and lying on a Turkish beach, across from the Greek island of Kos: Aylan. “Not in our name”, cry women and men gathered in associations of support. In Briançon, there is questioning. The dangers in the moutains are comparable to those at sea, and if migrants attempt to reach France by crossing the Alps, the risks of similar trageries cannot be ignored, especially in winter. This must be avoided. Such is the origin of the movement Tous Migrants (We are All Migrants) born in March 2016.

How can you cross the Alps from Italy into France? There are trains running from Menton along the coast, and the tunnel of Fréjus in the north, are closely watched. Crossing on foot through the Roya valley in the Maritime Alps where volunteers greet refugees, becomes the theater of clashes with armed forces, and of judicial harassment against the farmer Cédric Herrou. Exile candidates search for another route. Briançon serves as the terminal for this new migration road. There are several reasons to this. 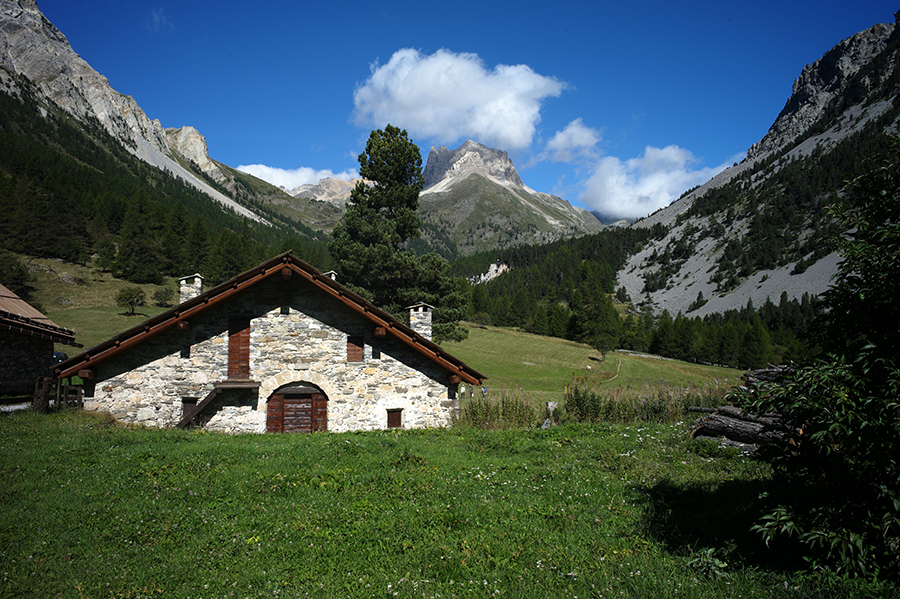 Italian side of the Echelle (Ladder) pass in the Narrow Valley, Valle Stretta in Italian (Photo: François Labande)

First off, the train. Arriving from major cities in Italy, there is regular service to two stations, Oulx and Bardonecchia, less than twenty kilometers away from the border. As for Briançon, a town of 15 000 inhabitants, it offers full services and is directly linked by train to Paris and Marseille. And finally, two passes below two thousand meters of altitude, offer the least difficult passage of the entire French chain of mountains, including on foot and in winter. Each of these passes has its own advantages and drawbacks. 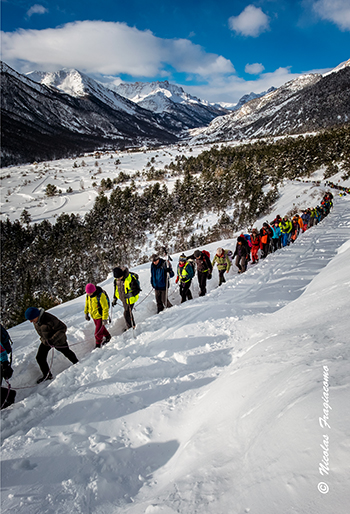 As its name implies, a rope of Solidarity climbers of over 300 people ascending from Névache toward the col de l’Echelle on December 17 2017 (photo: Nicolas Fragiacomo)

The col de l’Echelle (Ladder pass), long favored for migrations, is the lowest, it is connected to a road which is open in summer but closed in winter because of the snow. There is no permanent border crossing, only a small sentry box and surveillance is flexible in altitude. But it is heavily snowed under in winter and crossing the long plateau is a heavy physical challenge for inexperienced and poorly equiped young people.

Barely higher, the Montgenèvre pass is connected to a fairly frequented road system, open all year and used by large trucks. There is a real border crossing with permanent border police providing permanent surveillance with substantial equipment. The two villages in the pass, one in France and one in Italy, are two kilometers apart and integrated in a ski station. Crossing the pass on foot and in winter outside the roads presents the same problems as the col de l’Echelle, but it is a shorter distance.

Once across one or the other of these passes, there are still between ten and twenty kilometers of road to cover before reaching Briançon, roads on which the gendarmerie may intervene for controls and questioning. However at the exit to the col de l’Echelle on the French side, people in the small village of Névache have organized to provide temporary greeting facilities for exiles before leading them securily to Briançon. Among them, a recently deceased retired superior officer of the French army, Bernard Liger, who was totally devoted to the cause of solidarity and hospitality. The Minister in charge of the army refused to attend his funeral.

In Briançon, the volunteers from Tous Migrants take over for the exiles, feeding them, providing shelter and aid in their administrative procedures. The association has paid for train tickets so they can submit their asylum request in Paris or Marseille. If the need arises, they can be treated at the hospital, if required, thanks to the commitment of Médecins du Monde. A certain number of those who have managed to obtain refugee status have returned to the region and been hired in small local structures. 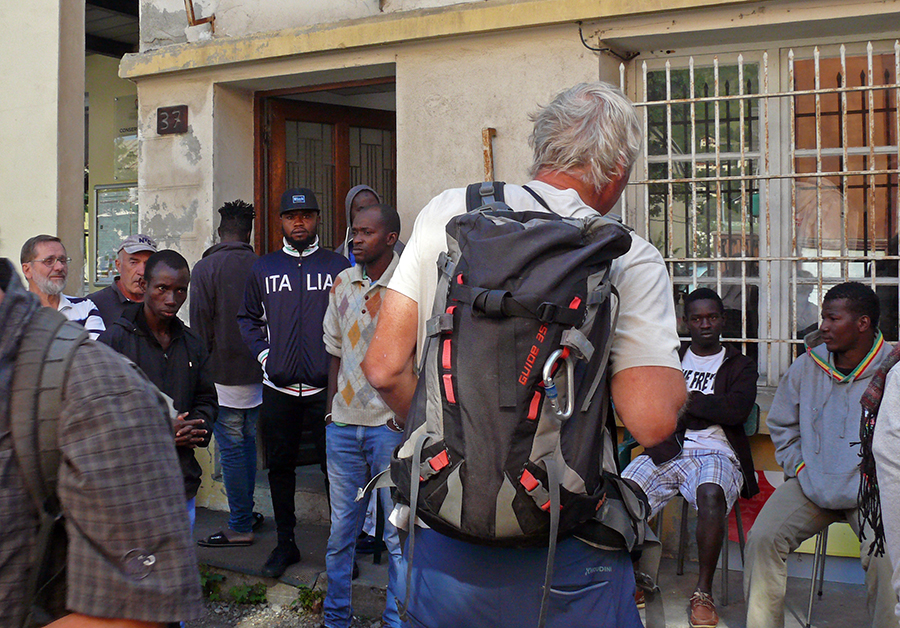 In front of the Solidarity Shelter, a meeting between passing hikers with refugees present on that day, September 4 2017 (Photo: François Labande)

Where dit they come from? At first, it was mainly from the Middle-East, Syrians notably. Then, following the agreement between the European Union and Turkey designed to “hold back” candidates to emigration, Africa took over (Guinea, Ivory Coast, Nigeria, Sudan notably). And only recently, the tendency has reversed again: less Africans but Afghanis and Iranians and Syrians once again. The reasons are always the same: civil wars, dictatorships, patriarchy, food and environmental crises. Marauders and volunteers have had no respite: despite uneven peaks, border crossings on the crests of the Alps have not ceased.

If the former mayor, Gérard Fromm, took the courageous decision of opening his town wide to the exiles unceasingly, he was not alone. His municipal majority weighed heavily in that direction, and several of his assistants worked tirelessly in the shadows in order to consolidate the exemplary position of Briançon in the difficult context of Frence’s migratory policy. We will return to the question of the dramatic consequences on candidates to exile on the smashing of that fine cohesion of the municipal council. But first we must speak of another aspect of the volunteers’ work: marauders.

The images of little Aylan were at the origin of the solidarity movement. “None of that in our mountains”, people said. Accidents, sometimes deadly, had to be avoided for the migrants risking their lives in the crossing of the passes in the Alps. At first professionals mobilized, mountains guides, accompanying adults, members of the ski patrol, with amateur climbers soon joining in, all of them familar with the difficulties and dangers in this natural environment. They took turns regularly criss-crossing the slopes at the foot of the border crests to recuperate men and women endangered by the prevailing conditions (cold, snow, storms, presence of rock barriers) and their rudimentary equipment (neither gloves nor waterproof shoes nor rainwear). Recuperating them, then leading them to the Shelter. These are called Solidarity marauders.

It should be noted that in cases of heavy trauma (hypothermia, childblains, fractures due to falls), the volunteer rescuers called on the PGHM (Peloton de gendarmerie de haute montagne) based in Briançon for a rescue operation by helicopter and an immediate transfer to the hospital in Briançon. Thus, while their colleagues from the mobile units were “hunting down migrants” on the crests in order to push them back into Italy their gendarmes colleagues in the rescue units were helping civilian rescruers and seemed to be saying: solidarity knows no borders. 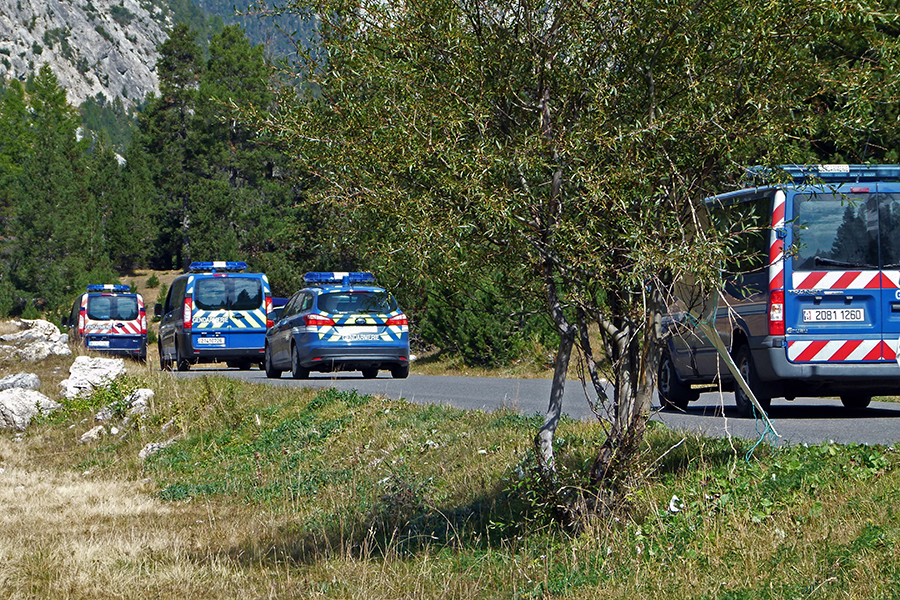 This constant commitment of the mountaineers helped the avoidance of several tragedies although at least five mortal accidents are known to have occurred. One of these made a particularly strong impression: the drowning in the Durance river of the young Nigerian, Blessing, following a night raid led by the police in the valley at the foot of the col du Montgenèvre, on May 7 2018. Tous Migrants had then reported the event to the prosecutor in Gap, suspecting the existence of an offense of “deliberate endangerment of someone’s life”. A file closed with no further action…

The marauders, as they have called themselves from the beginning, have never played at smuggling. All are volunteers of course, and never cross the border to find exile candidates. In accordance with the laws of the Republic. This has not kept them from being regularly suspected, accused, pursued, judged, condemned…before slowly becoming susceptible to acquittal on appeal, or even a reversal of the tendency by obtaining a condemnation of policemen guilty of perjury, or bringing proceedings against others accused of mistreatment on emigrants at border crossings. 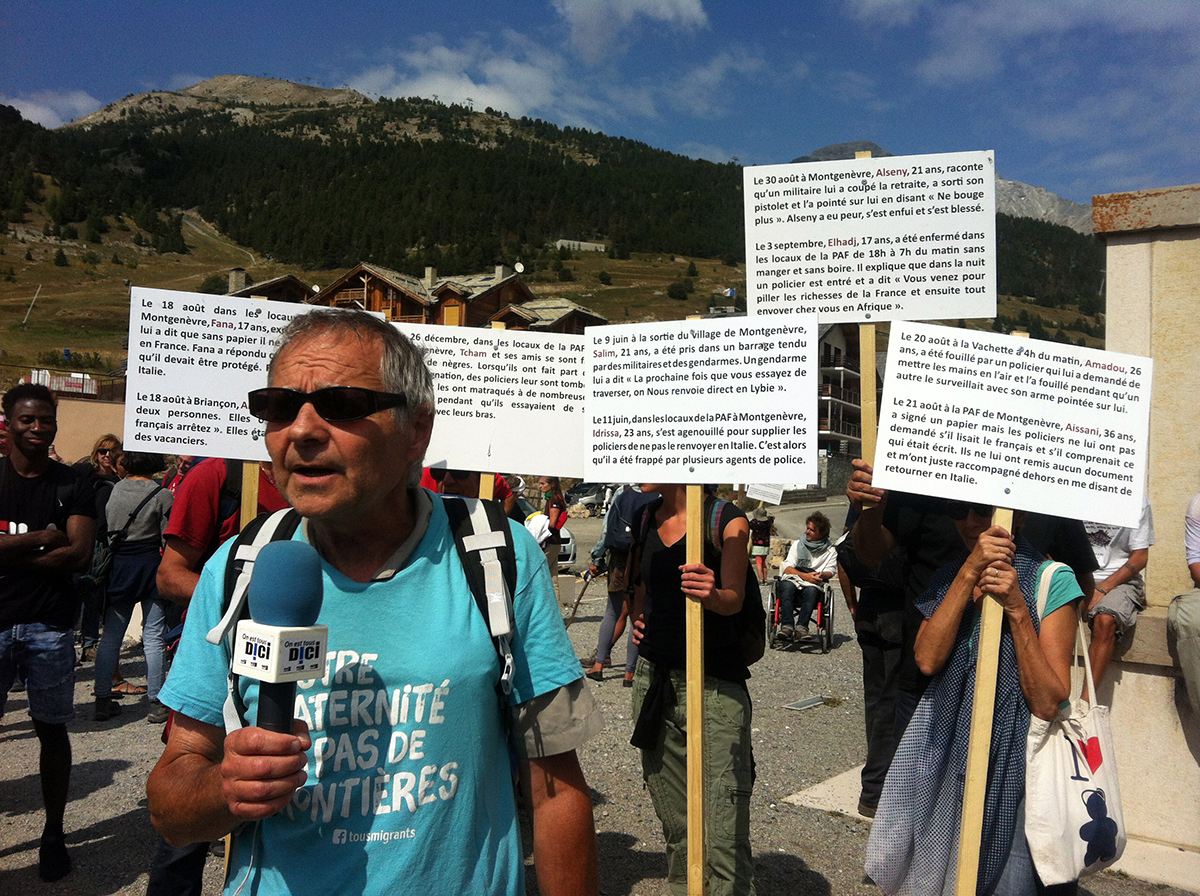 March at col du Montgenèvre, near the border police crossing, denouncing breaches to the rights of refugees, August 23 2019. (Photo: François Labande). Click on the image in order to read the watchwords.

The year 2020 marked by the arrival of the pandemic and municipal elections has been the theater of worrisome changes that could affect the fate of the exiles. During the two-month confinement period in early spring, the Solidarity Shelter was under strict surveillance and the volunteers booked for circulating in an illicit manner, complicating the simple survival food-wise of the residents blocked in the Shelter. Marauding became properly impossible. As for the municipal elections, they turned into a rout for Gérard Fromm. Why?

For reasons other than the town of Briançon’s commitment in favor of the exiles, the fine coherence within the municipal team cracked during the final year of its mandate. A mayor exhausted by the post, turned solitary and authoritarian, in conflict with his former partners on a number of files, finally rejected those of his colleagues too heavily identified as “leftists” in order to favor alliances with the hard right, in the hope of saving his seat at the elections in the spring of 2020. A lost gambit. The disoriented electors let him know and handed power over to a young and ruthlessly ambitious politician, under an identitarian ideology at the extreme opposite of the notions of solidarity that had shaped the image of Briançon in the eyes of French public opinion.

Sensitive to the dogma claiming there is “threat of invasion”, the new mayor Arnaud Murgia rapidly went to work evacuating the town of anything that might evoke notions of solidarity and hospitality toward emigrants. The closing of the Shelter on the cut-off date of October 30, along with other technical premises used by Tous Migrants and Médecins du Monde. Request addressed to public authorities for a greater surveillance at the borders. And this despite the advice from local gendarmes who fear an uncontrolled dispersal of migrants, since the rhythm of the arrivals does not appear to be abating.

Demonstration by Tous Migrants at the col de l’Echelle, September 23 2017 demanding that article 13 of the Universal Declaration of Human Rights be respected. (Photo: François Labande)

The citizens and the associations, the moutain marauders as well as the “invisible ones” handling daily greetings, are mobilized in order to resist as a first recourse and, if possible, regain the upper hand. Counter-attacking, as the military would say, and as Bernard Liger said when he was still alive.

In the short term, one date, two publications, and a call for support

Born in Toulon in 1941, François Labande is a French mountain climber and writer, founding member of the French section of the NGO Mountain Wilderness and author of several topo-guides on mountaineering, ski touring and trekking along with works of reflection on the practice of mountaineering and the protection of the vast wilderness spaces in the mountains.