Syria • Erdoğan uses refugees to exert a new round of blackmail 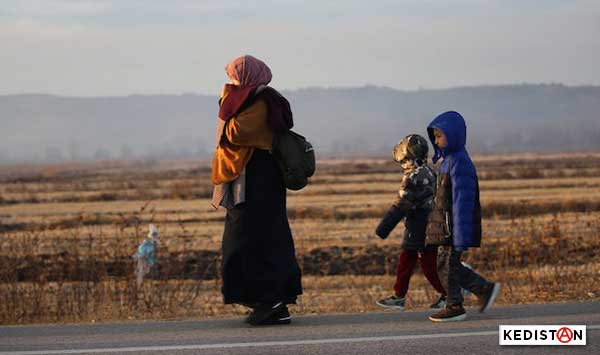 For several weeks now, the Bachar regime in Syria, with help from Russia, has attempted to destroy the last remaining “pocket” of resistance in Idlib.

This military offensive was expected and constitutes the final and paradoxical act of the so-called Sotchi Accords, that were held on the background of the changes brought on since the military defeat of ISIS and the American troop withdrawal.

Among other things, these agreements, concluded between Iran, Russia and Turkey without an explicit endorsement by the Bachar regime, provided for zones of “de-escalation” and cease-fire zones. These zones, taken back one after the other by the regime – the best known of which are those of Alep and of the Ghouta – were in the hands of groups and militias who, while claiming to be from the initial uprising against Bachar, are made up since 2012 of sliver groups of Jihadists and fighters with their own dynamics and interests.

These combatants and their families have been pushed back from one evacuated zone to another, or led straight toward the Idlib geographical area, already under the management of allied Syrian opposition groups or of a like minded Jihadist factions since the regime reconquered Alep in 2016. This zone, running some 50 km along the Turkish border (the region of Antioch and the close-by province of Hatay) has always been an area of border porosity and has played an important role in the Turkish regime’s interventions in the Syrian war. ISIS never managed to establish itself there.

In 2017, Jabhat al Nosra allied itself to other factions to create Hayat Tahrir al Sham (HTS) which already controlled this region of Idlib with others. In principle, Turkey was to disarm these groups as stated in the Sotchi agreements. This was forgetting the Turkish regime’s strategy which has now recycled and heavily armed a number of factions. Some were even sent to Libya as mercenaries recently. 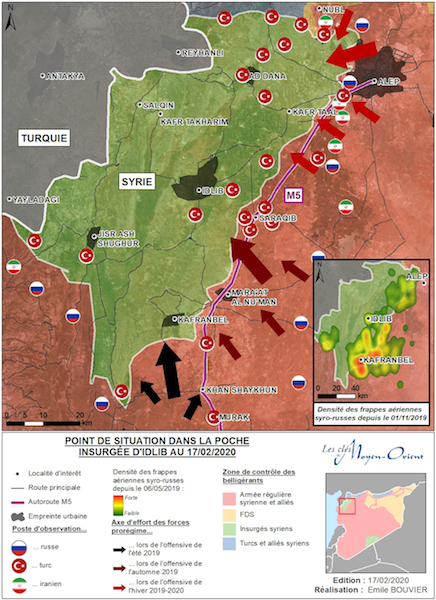 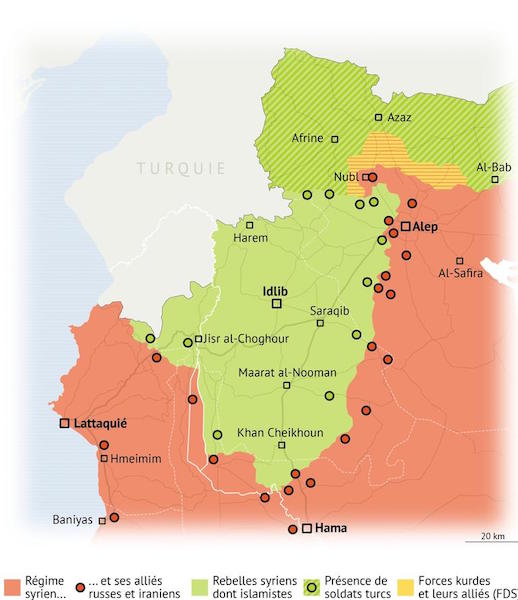 Porosity at the border, movements of logistical and commercial materials as well as weapons. On the borders of this geographical location there also runs a major highway, the M5, linking Damascus to Alep via Homs, which was also a bone of contention for the Syrian regime. The military presence of Turkish forces or of its “mercenary proxies” around the nevralgic spot of Idlib was reinforced these past few months and massively re-armed in total contradiction with the agreements aimed at the exact opposite and in which Turkey was responsible for the de-escalation of violence. On the Syrian regime’s side, the violent military reconquest has always been on the agenda, as long as the Russian presence and support allow for it.

One cannot detach the Turkish regime’s strategy in the zone from what were also the cease-fire agreements further North, creating a “buffer zone” militarily imposed against Rojava, and the de facto presence of the Turkish army, along with a policy of ethnic cleansing against the Kurds, during the extension of the occupation of Afrin in the previous year.
For its share, the Syrian regime pursues the military reconquest of its territory, outside the former “useful zone”, helped in this by Russian logistics and military power. This reconquest involves a tacitly imposed truce with the Kurdish movement. As we know, the withdrawal of the Americans and the free rein allowed to the Turkish regime for its occupations, along with the pressure from Russia, forced Rojava to pull back in order to protect its people, while demanding its participation in all future peace processes in Syria – a distant perspective.
The European states are totally absent from the process and the EU, having no diplomatic role to play, does not interfere in the affairs of the NATO member that is Turkey.

This paradoxical situation in which Russia is the dominant military force and Syrian ally, but also a “partner” of the belligerent Turks could not lead to anything other than a re-energizing of the war, a military escalation causing grave and effective threats against the civilians caught in a vise.

These populations, consisting largely of people who were already uprooted have been fleeing by the hundreds of thousands by whatever means they can find from the zones of direct assaults and bombings. Many of them turn toward the Turkish border, other were taken in, where possible, further North in areas already overloaded with refugees. Henceforth, these civilians are pawns for manipulations and blackmail.

And, of course, in this situation where Turkey now expects its European allies to support it against Russia, we see Erdogan re-introducing the blackmail using Syrian refugees as a threat against Europe.

Indeed, for several weeks now, the Turkish military situation which only yesterday threatened to reconquer Alep has considerably changed because Russia has contributed to massive bombings of Turkish troops and their allies in its support of a war of reconquest by the Syrian regime. Stalemate threatens the Turkish forces and the Erdogan regime is thus pulling out the “refugee” argument again in order to find a way out thanks to a European diplomatic investment. Meetings will be held to this end. The Security Council has been approached once again.

In the last few days, the Turkish regime has thus let some refugees slip through and has shown itself more open to those who wish to continue fleeing to Europe. Recent images testify to this, along with more numerous arrivals towards Greece.

This ignoble use made of the lives of entire families, caused by the war being conducted over their heads and leading to the instrumentalization of exodus, also serves through the flux of refugees in transforming the ethnic composition of geographical zones, a diplomatic instrument for Turkish nationalist bigots and Recep Tayip Erdogan. It is further comforted by the European policy of securing its borders, turning the Mediterranean into a marine graveyard, along with cesspools where migrants huddle on the periphery. The theme of “closed borders” is popular in the European far right, including with the health crisis caused by the coronavirus. We can be sure that Erdogan will exploit it to the hilt, over and over again.

He thus hopes to gain a framework for negociations in which he would claim prerogatives in Northern Syria, concerning his presence there, directly or by proxy. The alibi of a buffer zone in which to settle millions of yesterday’s and today’s Syrian refugees, with the financial help of European states, requires a framework to which Russia has yet to provide its agreement, and even less so Bachar’s regime.

No source of peace can arise from this other war in Syria. Rojava fighting for democratic cohabitation and recognition for the peoples of Syria, is caught between a rock and a hard place, ordered to disappear politically or to choose its side, with no escape routes opening before it.

We can also be sure that the repeated threat of “invasions” will undoubtedly reinforce xenophobic and identitarian ideologies in Europe. And we may even expect an anti-Erdogan crusade on their part.