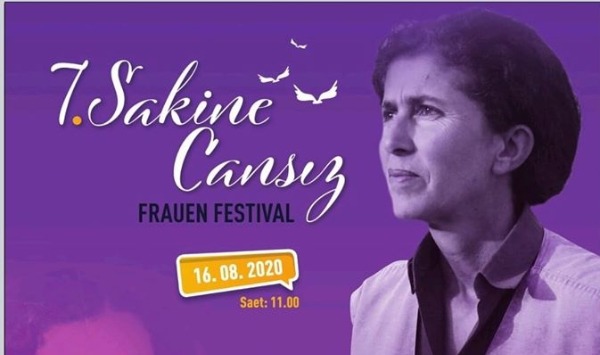 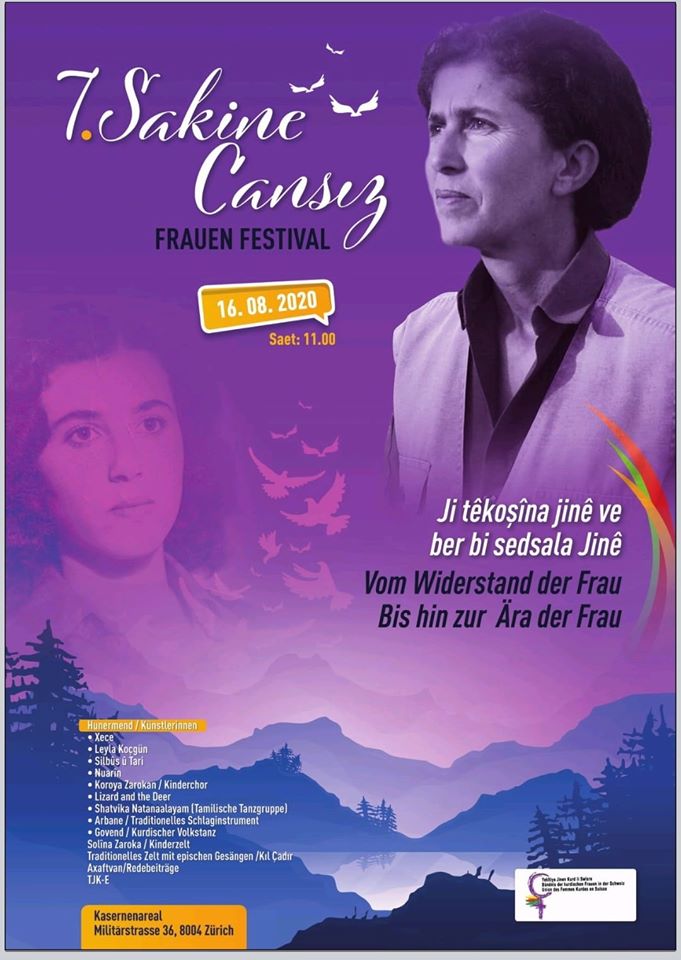 The 7th edition of the “Sakine Sakine Cansız Women’s Festival” is back this year following a slight delay due to the pandemic. It will take place on August 16 2020 in Zurich Switzerland.

This festival focuses on “Sarah” – Sakine Cansız – and her struggle for Kurdish women. It also emphasizes how, given the patriarcal system dominating the world everywhere and at all times, the struggle is a duty for all women. This year, the genocidal attacks aimed at women will receive particular attention.

The transmission of ideas through art and culture in a joyful atmosphere is a hundred times more efficient in creating links of solidarity than the thousands of flyers and articles distributed before the ink dries… All this, of course, without forgetting the suffering, the lives lost nor those that were lost on violent war fronts led by the occupying, colonizing, pillaging, raping patriarcal spirit… This edition of the festival is dedicated to women who carry on the combat and those who fell for the cause, particularly in Heftanin.

Music, dancing, talks, exhibitions, meals, the “Sakine Cansız Women’s Festival” will greet the public with a varied program all day. Children are especially welcome this year, with a special playground planned for them.

The specificity of this festival is that, from organizers to volunteers, speakers to musicians, including the technicians, as much as feasible, all contributors are women. Of course musicians accompanying the singers are welcome, as are all members of the public.

It is not for nothing that the women working for the festival have adopted as their motto “organizing together, rising together”. They consider themselves to be Sara’s successors, and wish to carry her ideas and ideals, and her fighting spirit beyond the struggle of Kurdish women onto the international stage. The 2020 edition of this festival will take place under the slogan “Women’s resistance – until the woman’s era”.

Indeed, containing as it does a real-life experience, a strong and specific thought, Sara’s struggle is both a precursor and a guide to enriching today’s feminist reflection. Carried by her sisters, this life-affirming philosophy offers an undeniable resource in order to strengthen struggles for emancipation, equality, rights, struggles led by women on all five continents against patriarchy, machismo, sexism, ethnic, religious social and gender disciminations, as well as violence and feminicides.”

As a reminder, Sakine Cansız was one of the co-founders of the Kurdistan Workers’ Party (PKK) and a figurehead of the Kurdish Women’s Movement. She was assassinated on January 9 2013 in Paris, along with two militant Kurdish comrades, eyla Şaylemez (Ronahî) and Fidan Doğan (Rojbîn). This triple assassination over which the inquest never ceases to be be re-opened, is subjected to every pressure imaginable by the Turkish Embassy in Paris…

Prior to the festival, the organizers called on Sakine’s friends and others who met her at various times in her life, in order to put together a collection of memories… A fine tribute in view…

The program includes names and groups such as Xece, Leyla Koçgün, Silbus û Tari, Nuarîn, Lizard and the Deer, Shatvîka Natanaalayam, and the Koroya Zarokan Children’s Choir. Guests will enjoy the impressive sound of the erbane, the Kurdish drum, and may join in the govend dance, a kind of collective gavotte!

Guests will partake of traditional, home made foods prepared by the volunteers… Under the main tent “Kıl çadır”, women dêngbej will sing traditional kılam throughout the day. Axaftvan and spokespersons for the Kurdish Women’s Movement in Europe (TJK-E) will speak in public.

Under its tent, Heyva Sor a Kurdistanê Swîrsre, the Kurdistan Red Crescent of Switzerland will hold an exhibition of reproductions of Kurdish artist, journalist and author, Zehra Doğan. They consist of works created during her clandestine period in 2017, prior to her arrest, and of others she produced while prohibited to do so in prison between 2017-18, reproduced with logistical support from Kedistan thus providing its modest contribution.

Heyva Sor Switzerland will continue its appeal in order to make it through the current difficulties generated by the Covid-19 pandemic on its aid initiatives. Donors can return to their home not only with a vivid memory of this day but also with postcards and posters of Zehra’s work, also offered in solidarity by Heyva Sor.

All funds collected during this initiative will contribute to supporting families in the Makhmour refugee camp in the district of Mosul in Irak. Placed under embargo for the past year, Makhmour is afflicted by a serious economic crisis. Regularly bombed by the Turkish Air Force, some 13 thousand people attempt to survive under difficult conditions in the refugee camp. The sick cannot leave the camp for treatment. This solidarity is part of the different actions carried out by Heyva Sor.

For more information, do not hesitate in clicking on the following links. Even from a distance, you may also contribute by sharing the publications and the festival’s program on your social and friendship relays.