Turkey • Erdoğan the blood-thirsty warlord and his supporters 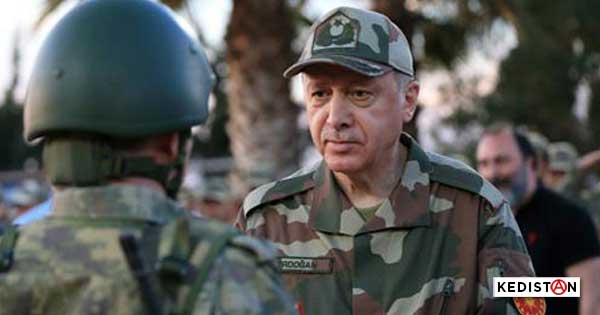 Once again, Turkey’s name is being pro­nounced like a curse word by all those across the world who already have to deal with a burn­ing plan­et. And their indig­na­tion is total­ly warranted.

Erdoğan, Turkey’s Reis, is noth­ing but a butch­er and his sup­port­ers wade in slaugh­ter­house excrements.

Not so long ago, while ISIS was slit­ting throats, rap­ing, plun­der­ing yet doing busi­ness nonethe­less, Erdo­gan allowed the buy­ing of cot­ton, oil from the beard­ed ones, and had them treat­ed in hos­pi­tals locat­ed on the bor­der. At the same time, he con­tin­ued to cher­ish oth­er beard­ed ones, who were against Bachar but for their own advan­tage, the same ones he is now using as his assault force in his dirty Syr­i­an war. He even calls them the “Syr­i­an nation­al force”, no less!

Erdoğan cos­set­ted his pro­tégés, the ones he con­tributed in installing in Afrin, among oth­er feats of war, where rapes, plun­der­ing, tor­ture set the rythm for the appeased life under the “olive branch”.

I though I had seen, heard and read everything.

Our Prime Min­is­ter, vis­it­ing with friend­ly strangers, declared that every­thing was done accord­ing to inter­na­tion­al rules. The attack plan was filed with the UN, along with the motives, the autho­riz­ing arti­cles and every­thing. Same thing with NATO, of which Turkey is a mem­ber. As a result, le sec­re­tary invit­ed the use of bombs that would avoid civil­ians and NATO declared as degit­i­mate Turkey’s will to pro­tect itself on its borders…that is, a bit beyond its fron­tiers, but this is for the com­mon good against ter­ror­ism, we won’t start argu­ing over 30 kilo­me­ters more or less. In the pre­vi­ous cen­tu­ry, in Aus­tria, anoth­er dic­ta­tor had attempt­ed mov­ing ahead a bit too far with­out any­one budg­ing. There’s inter­na­tion­al jurispru­dence, isn’t there? I think it’s called the Munich arti­cle.

What hap­pened was Trump had just changed phone ser­vice. While attempt­ing to get used to his new iPhone, he tweet­ed a few bits of bull­shit, just to check it out. Erdoğan took it all for cash and called him on the spot. “Green light” said Don­ald, before say­ing the oppo­site at the end of the day. “Tough, what’s said is a done deal”, answered our Reis. That’s how the whole thing started.

Thing is, Erdoğan had been wait­ing a long time for this moment.

He was raised in the belief that our Ottoman ances­tors would nev­er have accept­ed that those ter­ri­to­ries be hand­ed over to oth­ers than Turkey. And since that notion is well estab­lish here, he found a way to make it hap­pen: a buffer zone where the Turk­ish flag would fly peace­ful­ly, even if that means hav­ing to mas­sacre all the inhab­i­tants or shov­ing them off to anoth­er place. You have to won­der where… And to top it off, it so hap­pens that all the Par­ty lead­ers at the last elec­tions were in per­fect agree­ment with the principe, all the way from the so-called Kemal­ist Left to the extreme right-wing grey wolves. A fine cus­toms union, the whole lot of them. 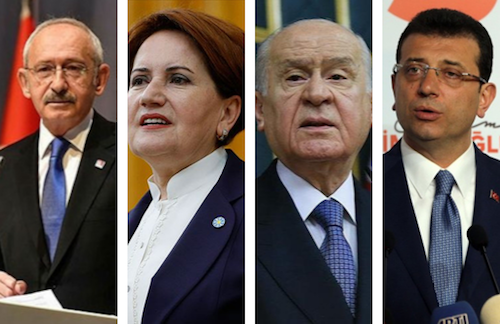 And they made state­ments and called for prayers for sol­dier Mehmet off to kill some Kurds in Syr­ia, just like he did in East­ern Turkey these past few years… It ‘s enough to make you sick to your stomach.

Erdoğan is no fool, he’ll put his beard­ed pro­tégés to the fore. He had already done some of that since 2015. It was hard to know who was under the beret or the scarf. Hired guns. Includ­ing, in 2015, cer­ti­fied FETÖ offi­cers Erdoğan has jailed since, so as to leave no crime unpun­ished. No, not for killing Kurds, that’s legit­i­mate, but for “secu­ri­ty”, because of the strange coup… If they were still around, I won­der what those FETÖ offi­cers would think of the lat­est Syr­i­an stroll to chase down Kurds.

In short, except for the demo­c­ra­t­ic left, not to call it the HDP, all our Par­ty lead­ers will pose for the war boun­ty pho­to, one foot on the beast… In their dreams, at least…

Please excuse me for adopt­ing such a tone, but it’s either that or puking…

“Not in my name”. Isn’t that what you write on your posters? Except for the Kurds and all the oth­ers who have already lost every­thing, who in Turkey will dare to march with those words?

We played at the see-no-evil, hear-no-evil, speak-no-evil mon­keys in the case of Afrin, just as the author­i­ties request­ed. And since the price of pots and pans has increased, we avoid beat­ing on them.

I sup­pose they’ll be ask­ing us to put the flag out on our bal­conies again. I’d rather use mine to wipe my feet in the bath­room. It is already too red with the blood poured out for this racist, stink­ing nationalism.

Tell me you won’t let this go through?

Zehra Doğan, to whom I owe so much of my courage, pub­lished one of her prison draw­ings today. It is in such agree­ment with the day. 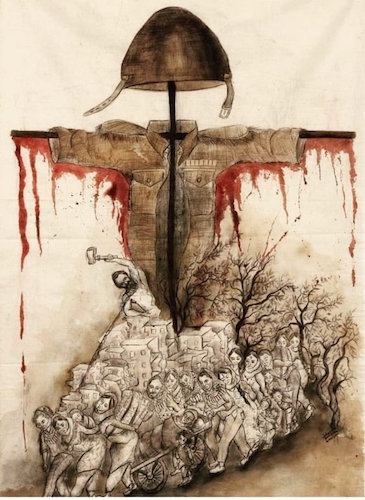