In Syria, Erdoğan is off to make war… “in the name of peace” 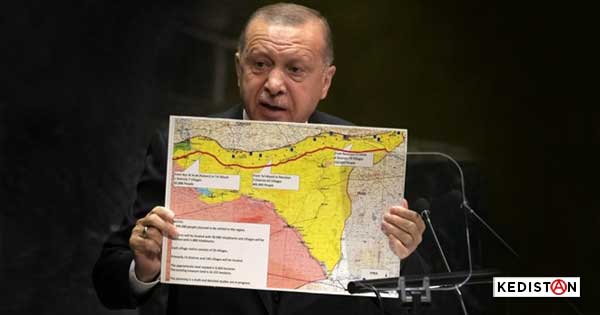 Our readers won’t be learning much if we tell them that Trump has just publicly conforted the Turkish regime in its planned assault on Northern Syria.

The news has been published and commented. The American administration is washing its hands in advance over the exactions and probable killings that the Turkish army and its  back-up troops may commit on a wide swath of the Northern Syrian border.

Trump’s announcement was unequivocal and it was even followed by troop movements on the ground.

The justification may appear a bit short, but it reveals the man’s “strategic analysis”… “The Kurds fought with us, but they received massive amounts of money and material to do so. They have been fighting against Turkey for decades.  I stayed clear of this conflict for nearly three years, but now it’s time for us to get out of these ridiculous endless wars, many of which are tribal.”

If Trump has been proclaiming a troop withdrawal from Syria for a good while already, this time, while arrangements and the cobbling together of border   surveillance was under way, he claims that Erdogan’s militarist projects are none of his business anymore. “The Europeans should have taken care of it sooner, notably as far as managing ISIS war prisoners,” he adds.

Even if Republican elected members in the States are already condemning their boss’ position, in the midst of the rest of the internal  muddle, one can well imagine that Trump is testing the solidity of his majority on this topic also…

These last few days, Erdoğan was displaying for all to see, the map of the territories he covets. 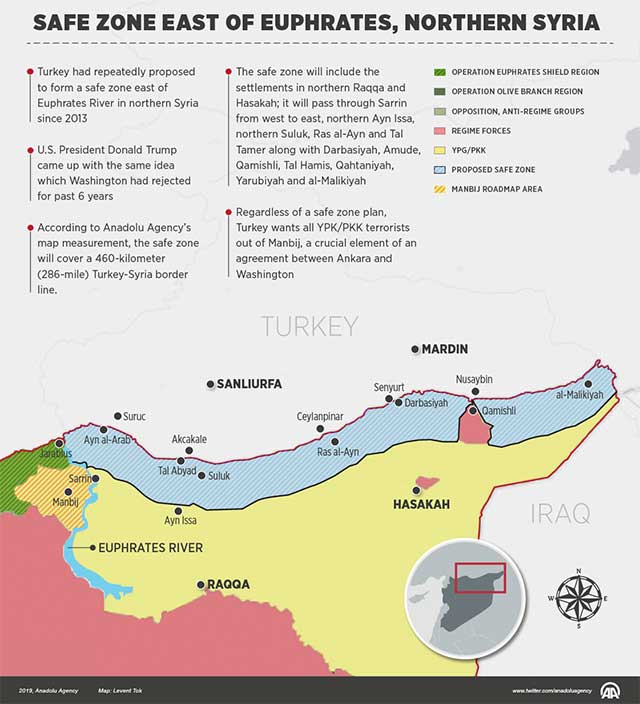 Unsurprisingly, it closely resembles those that were coveted  in the region by the former colonizers a century ago, and restates previous wishes for the future Turkish state  based on the imperialist rule over these fragmented territories. Turkish nationalists, just like those suffering of  Ottoman nostalgia, spread the notion that “those lands belong to us“, as they have done since the onslaught in Jerablus, then during the invasion of Afrin.

The demand has persisted under the “buffer zone” concept, Erdoğan’s obsessional pet topic since the beginning of the war in Syria.

Looking at this map, one notices that Erdogan makes an exception for Qamislo, facing its mirror image of Nusaybin in Turkish territory (and scene of fighting and killings in 2015, heavily demolished because of its Kurdish population). Since the beginning of the war in Syria, the Syrian regime has maintained an administrative presence in Qamislo, the current nerve center of Rojava’s administration.  Attacking this small part of the territory after its preservation throughout open warfare since 2011 would clearly amount to a casus belli.  This also gives rise to questions concerning the back-room discussions held in preparation for this Turkish invasion.

Erdoğan bawls his intention to “set fountains of peace flowing“. In answer no doubt to the slogan that claims “if you want peace, prepare for war” but also the better to justify his constant accusations of “terrorism” against those who were the military victors of ISIS and who  are currently attempting to establish a durable peace under extremely difficult conditions, proposing a road to a democratic agreement between the peoples in the region. We all know what “peace” meant when it was announced in Afrin: murders, torture, sackings and the reign of Jihadist terrorism under the Turkish army’s back-up military forces.

The invasion is imminent and targeted bombings have been occurring for a week. What remains to be seen, following the American declaration: international reactions, first and foremost among them, Putin’s public stance, as he has provided unconditional support to the Syrian regime whose borders would be moved back. 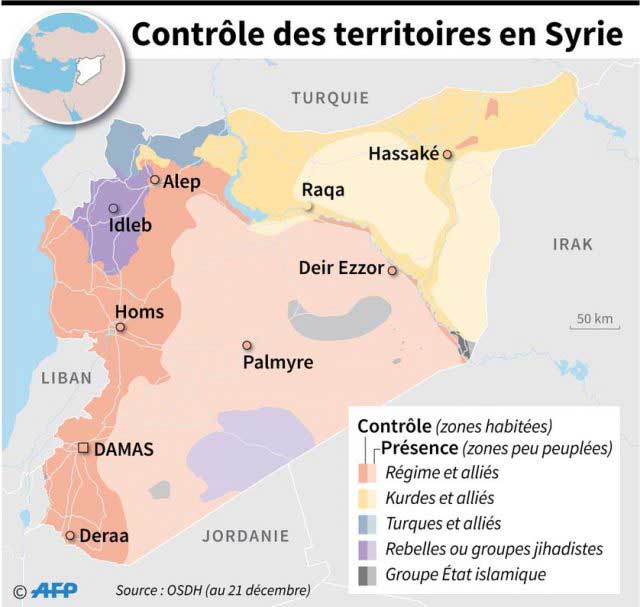 Everyone knows this regime has neither the military nor the political means to act directly in the North. But, for Syria at the moment, the main question is not that of a violation of its borders. Idleb is the abscess, close to the Western border and where the Jihadists have gathered following successive agreements after the recapture of Alep and of other pockets of resistance, agreements to which the Turkish regime was a party along with Russian and Iranian diplomacy.

The Syrian regime would not be averse to seeing the FDS (Kurdish and Arab members of the coalition) abandoned and weakened by a Turkish military offensive –  Turkey, need we be reminded possessing a high level of weaponry as a member of NATO.

The more one analyzes the scene, the deeper the military and strategic mess appears, knowing that the Iranian question is also part of the back-drop, just as are the murderous social and political riots ongoing in Bagdad at the moment.

Should additional steps be taken, notably by Erdoğan, the fountains of peace will be fountains of blood, even creating new sources that will mix with Middle-Eastern oil.

So what should we do? Denounce, demonstrate?

Information for international audiences must stress what Trump himself includes in his press release: if Erdogan’s project comes to fruition, he will be the de facto manager of the multitude of ISIS fighters taken prisoner…

Not only are the ones – mainly Kurdish fighters – who shed their blood to militarily destroy the Islamic State in Syria betrayed and abandoned, not only, despite their demands, has no real aid been provided for them to manage the former killers and the camps where they are gathered with their supporters and their families, but they will become, once again, Erdogan’s “designated terrorists” present on the Northern Syria territory. But let’s not expect any morality in international politics, between international and local imperialisms.

What should urgently hold everyone’s attention is Erdogan’s possible war bounty, and the source it will provide him for  international blackmail: the remains of ISIS…And we know that he has no moral qualms in this regard, as in a not-so-distant past he maintained complicities with radical Jihadists in Syria who, along with Bachar,  transformed attempts at political emancipation into a civil war.

Drumming this fundamental danger in messages everywhere, without providing further arguments to every breed of identitarian for whom a Middle Eastern refugee is a natural born terrorist, may impress public opinion and stop a greater advance in the political and military projects the Turkish regime is pursuing with the active  support of the entire Turkish nationalist wing.  Even as they do their best to look elsewhere, European politicians cannot avoid being worried.

No to an advance of Turkish forces in Northern Syria, no to a Turkish peace through blood, as was the case with the “Olive Branch” against Afrin. There is not a single people in Europe who has anything to gain in this  end of Ottoman empire nostalgia, the source of all the region’s nationalisms and wars against the peoples for the past century.

Oh… Almost forgot… I hear through the voice of the “French right wing’s hairdresser” that France has just drawn Turkey’s attention to “the humanitarian consequences” that might flow from a “unilateral” action. Our General from Brittany can do better, no?

Following the uproar within his own Republican Party, the Pentagon’s lack of enthusiasm and the “concerns” expressed by international leaders, Trump has “re-oriented” his public discourse, minimizing the number of American troops being moved out of the border area, and expressing a warning to Turkey against an attacks being decided unilaterally.

He has thus created total confusion that did not fool the Turkish regime who immediately followed up with this statement: “Preparations were finalized” and there was a will to move ahead in the coming days.

It is hard to tell if Erdoğan is still in a threatening stance in order to get a free light or if he will take the risk of open warfare on the ground while putting all other leaders at the foot of the wall. Everyone knows that, given the various interests over Syria, they could make do with the Turkish regime doing the dirty work on the ground. Bachar could then settle the “Idlib abscess” by the same token…

Thus, the anti-war mobilization remains essential, along with the political requirement that governments not be content with “warnings”, but move on to open condemnation of any such intervention, clearly assuring Rojava of support and, as a minimum, demanding a no-fly zone over the area, as requested by the FDS.   For once, NATO could be the venue for each member to demand a freeze on military action by one of its members. Republican senators are working on this option. A less than revolutionary stopgap, no doubt, but one that could save so many lives…

So Erdoğan has chosen to back world leaders against the wall and began his attack against Northern Syria today with bombings by artillery and fighter planes. “Turkish war planes have begun hitting civilian areas, there is much panic in the population” reported local witnesses. At 15h00,  Recep Tayyip Erdoğan  confirmed the launching of the military offensive.  Even if “disapproval” is the rule in international chancelleries, and even in Republican ranks in the American Congress, no decisions have yet been taken to put a stop to the offensive, such as the imposition of a no-fly zone, for instance. Everyone is calling on everyone else to call a meeting of the UN’s Security Council… Erdoğan is probably counting on the fait accompli  of an extremely murderous lightning strike in order to make European governments partly responsible because of their inertia.  He could thus let Jihadist groups under his control, take over the zones beyond the frontier, just as he did for Afrin.