The Unspeakable in a Child’s Eyes 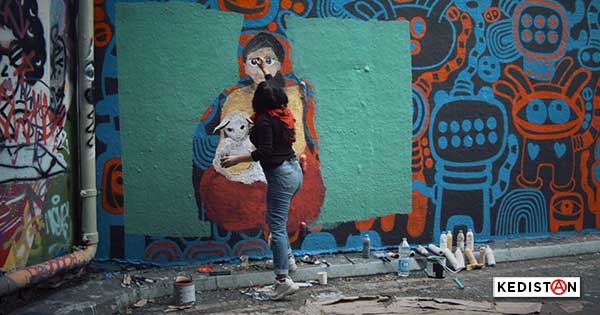 Ceylan Önkol’s wide open eyes contain the full symbolism of war children, of those generations that were cut down at the age when they should have been fully engaged in the process of growing.

In this specific case, there is an explanation to the symbol. Zehra Doğan revealed it when she explained that the only photo the press could publish after Ceylan was mortally wounded by mortar fire  while she tended her sheep, was  simply that of a child with unnaturally widened eyes, captured in a Photomat…

Ceylan Önkol was killed on September 28 2009 in the hamlet of Hambaz, a part of the village of Senlik in Diyarbakir’s Lice district. Her death caused quite a ripple even causing emotional outbursts in Western Turkey, although, four years later, the West is now quite deaf to the woes of the Kurdish people. Ceylan Önkol died within the triangle formed by the Tabantepe military unit, toward the Bingöl side of the Bingöl-Diyarbakır border, and the gendarmerie outposts of Abalı and Yayla. The “inquiries” were lost in the meanderings of  a failed inquest and even the CDEH   failed to proceed any further.

Therein lies a second symbol, that of an unpunished crime committed against a child by State-ordered armed forces.

There have been so many others, even if one looks only at the Turkish territory. Some were greeted with emotion, such as tiny Alan Kurdî in 2015 (rechristened Aylan Kurdi by the press) whose dead body on the shore was seen all over the world. The EU then signed agreements with the Turkish regime and thus financed an “ally” against migrants. The “smugglers” were condemned, with words.

Nihat Kazanhan, was killed at age 12, Berkin Elvan was killed in 2014 during the Gezi revolt, while going out to get bread for her family, there were also Muhammet and Furkan, crushed by a tank while they slept, and so many others…

During her incarceration, Zehra Doğan lived with these children as co-detainees and documented the situation; some of them have finally been freed.

The Association for Human Rights in Turkey (IHD) has published a report on the violations of children’s rights in Turkey. “Since 2002, under the reign of the AKP (Justice and Development Party), 440 000 girls and adolescents of less than 18 years gave birth to a child”. The report makes no mention of the boys…

Would Turkey then be the country where violations of children’s rights are most blatant?

Certainly not, no matter what those accusing the “Muslim” nature of the country may say, considering as they do that  this religion “disregards everything.” Where sexual violations are concerned, patriarchy is the cause and the figures concerning assaults against migrant children in the United States make your head spin. Each year, more than 3 million individuals are directed toward authorities responsible for the protection of children. The mortality rate is approximately two deaths per 100 000 children. Not to mention the killings of young people caused by the flourishing weapons market. The USA is not a “Muslim” territory…But our purpose is not to conduct an “infanticide comparison”.

Let’s get back to the children of war and Zehra Doğan’s words when she signs a mural about Ceylan on the walls in London.

What Zehra is expressing is both a denunciation of the fate of Kurdish children fallen under  unpunished crimes, killed by  gunfire or crushed under tanks, and the larger question of children in war. It is a drawing for peace, and the sheep in the drawing is in no way  a symbol of absence of resistance…

And if this drawing could also speak about child soldiers, children drowned in the Mediterranean, the children in Yemen dying under the European weapons sold to their torturers and the children of Palestine, it would do so.

Ceylan Önkol’s wide open eyes stay that way to tell us to open our own. More than ever is it the time to stay alert, while political leaders stay mum about Erdoğan’s projects in Northern Syria!