Turkey • Children are jailed with their mothers 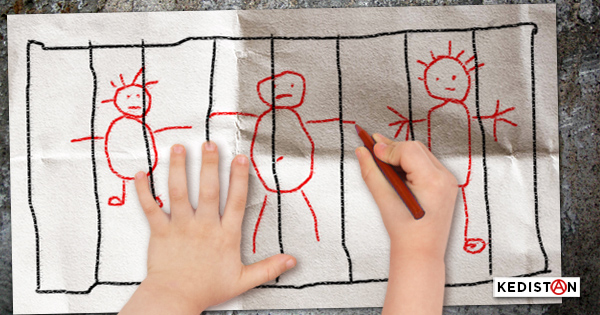 In Turkey, April 23rd is “National Children’s Day”. Hundreds of children will celebrate it behind bars, detained with their mothers…

Pyschologists report, and don’t stop denouncing, the effects on children of imprisonment and the mediocre conditions of incarceration.

The Turkish ministry of Justice had begun an inquiry  of specialists and of mothers incarcerated with their children. They were asked “Would children be better in jail with their mother or in State orphanages?”At the very least, specialists and pedagogues recommended lowering the current age of detention from 0-6 years to 0-3. As for the mothers, they said they preferred keeping their children with them, despite the difficulties of the carceral environment, rather than being separated from them and having them sent in institutions. But, concurrently, they demanded better conditions in jail.

Following these consultations, the Ministry filed away the report… And insists that the prisoners’ children can benefit from day-care and kindergarten facilities “close to some jails”, open to the children of prison staff and of judges and prosecutors…

The children’s sentence, a double sentence for the mothers

A few days ago, on February 20th, 28 organizations from the civil society issued a common declaration about children in jail, using the case of Filiz Karaoğlan, incarcerated in Patnos prison with her premature twins.

The communique raises several issues. Prison quarters systematically hold more people than their capacity should warrant. Since there are no carpets or other softening materials on the ground, babies spend almost all their lives on their mother’s bunk bed. Children’s access to nature is impossible. Thus, the children’s incarceration represents a double sentence for the mothers.

In Filiz’ case, but also for other detained mothers in other prisons, the only food supplements provided by the prison administration consist of baby foods such as fruit juices and cookies. Obviously, fresh foods, fruits and vegetables are required for the development of  small children. Moreover, conditions in the quarters – intense humidity, insufficient heating and air circulation – create an environment conducive to a number of illnesses.

The communique also mentions: the total absence of a supportive program offering even a minimum of well-being for the children in jail. Day-care centers opened in some prisons do not accept children below a certain age. Those children’s first years are spent entirely inside the quarters.

The few changes introduced in the legislation without taking into account priorities for children, show a very limited amount of benevolence, and demonstrate an orientation dedicated to the maintenance of these children in jail, with no improvement in their mothers’ conditions of incarceration.

The incarceration of mothers and children, devoid of necessary and sufficient sollicitude, falls within the provisions describing violations of human rights.

The communique calls upon the Ministry of Justice to  tackle anew the problem of children in prison in an urgent manner and with cooperation from specialists, organizations from the civil society as well as organizations and institutions devoted to child welfare, in order to find solutions and end this violation of fundamental human rights.

Dersim, Ayşe, Çınar, three among others…

The recently liberated Kurdish artist, journalist and author Zehra Doğan, expressed her concern in a reportage published in the beginning of February 2019:

“Since my incarceration, I have met scores of children in prison. Here, we have Dersim, 2 years old, Ayşe, 3, and Çınar, 5. These children have never seen the outside world, don’t know what leaves on a tree  or the earth feel like.  We try to teach them from books. Every time we leave the  walk and cross into the corridor, Çınar cries and yells “I don’t want to go inside“. She attacks the guards. Dersim and Ayse show strong displays of anger. They frown every time the guards close the door. They can’t manage to sleep because of the noisy environment. They wake suddenly and cry. All three are in different quarters. Ayşe calls, yelling under the door, “I’m here, do you hear me? Çınar, Dersim, are you OK?” She talks to them by putting her mouth on the trap covering the gutter, “Çınar, do you hear me?” she yells.

In a report published March 1st on Bianet, Zehra adds:

“Ayşe showed her joy with cries every time she saw a plane or a flying bird. She would talk to them “Bird, make me fly, take me to the trees! Bird, take me!” And we would tell her, “Ayşe, go with the birds”, and she would answer “I can’t, I’m detained here.”Then she would try to push her head through the wire mesh. It didn’t work, she couldn’t get out. Ayse, who entered jail at the age of 7 months, has never in her life seen the sea, a tree, the earth…”

Of what “national Children’s Day” can we talk about in Turkey, when they are jailed and subjected to the disastrous fate the Turkish State reserves for its presumed and fantasized enemies? Does the regime need to “eat its children” for the survival of its so-called Republic? It already does so with adults with its militaristic hysteria.  Preserving its descendants through the basic respect of the international treaties Turkey has signed would be a minimum.

Civil society organizations bravely struggling for this minimal respect of rights must be supported from outside Turkey as well. Their fight for human rights must be popularized. But, while waiting for progress, the children themselves must receive human attention.

And at Kedistan, we say “let’s go for it”. Let’s go for it with correspondence, the sending of drawings, the adoption of emprisoned children by school classes… We will gather together as many addresses as possible for this, and will prepare an appeal each of you can then use in the coming weeks and, why not, for a “transnational Children’s Feast” in April?