From Munich to Ankara: sketch of a catastrophic scenario 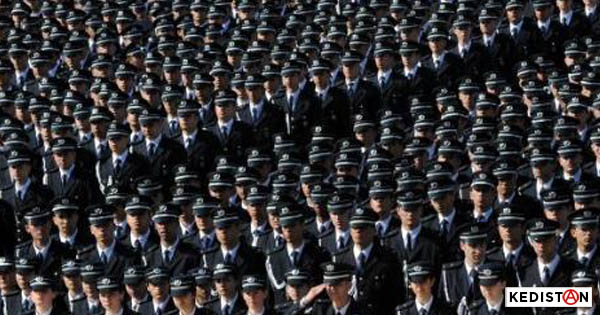 In addition to her latest column we are sharing here, Carol Mann writes us :

Yet, when assembled, a sinister coherence appears, one that is not unique in history and brings to mind the Munich Agreement. Hannah Arendt often spoke of that oh-so human refusal to consider the worst as being part of the possibilities and realities that surround us. That is the aim of this paper.

Kedistan therefore turns the floor over to Carol Mann, a sociologist specializing in gender issues and armed conflicts, and Director of the association Women in War. Carol imagines what might occur if the situation in Turkey continued to deteriorate and if the United States, France and NATO-member countries persisted in their blindness concerning Ankara’s true intentions.

Be prepared for a spine-chilling “anticipation-thriller”, one that is, unfortunately, not impossible.

Are we preparing an updated version of the Munich Agreement ?

In 1951 in her now-famous essay*, Hannah Arendt wrote : « It is obvious that many of the mistakes made by the non-totalitarian world in its diplomatic relations with totalitarian states…can be ascribed to a sudden incapacity of common sense to grasp reality. »

Can we impute this sudden incapacity of common sense to grasp reality to our present governments, one comparable to that Arendt noted, in particular at the time of the Munich Agreement in 1938. That Agreement, signed with Hitler by France, Great Britain and Fascist Italy authorized the annexation by Nazi Germany of regions occupied by Germans in Czechoslovakia. The main parties, notably the Czech President Edvard Beneš, were not invited. Leaving this fateful meeting, the British Prime Minister, Neville Chamberlain is said to have pronounced these sadly famous words : Mr. Hitler is a gentleman, convinced that war would be avoided thanks to this bit of diplomatic sleight-of-hand. One year later almost to the day, Germany invaded Poland and the Second Word War roared into being, dragging almost the entire planet in its wake.

One can wonder if our current governments aren’t demonstrating comparable blindness concerning present-day Turkey. President Hollande lavished praised on his Turkish colleague at the Élysée, saluting President Erdoğan’s courageous stand against terrorism. Washington demonstrates comparable approval and everything indicates that, after the next elections in both countries, this general enthusiasm will not be about to disappear.

However, the Turkish army’s relentlessness against secular Kurds in general and the HDP in particular has nonetheless begun to trouble international opinion (if not its leaders), puzzled by the lack of action against the official enemy, the Islamic State. This last does not seem to have suffered unduly, neither from the increased police repression in Turkey, nor from the military strikes : the entire military and police arsenals have been concentrated against real or imagined PKK sympathizers, in Turkey as well as in Syria and Irak, including bombings on Kurdish villages.

In exchange for the authorization to use the Turkish bases of Incirlik and Diyarbakir to bomb ISIS, as I described with supporting map in my preceding article, Turkey has obtained a so-called buffer zone right on the frontier of Rojava, without this raising the slightest question from the other NATO-member countries. And yet, this zone of exclusion underlines the beginning of Turkish drive toward territorial expansion. Expansionistic ambitions are part of President Erdogan’s Neo-Ottoman megalomania and these views, which are a secret for no one, target in the middle term the capture of three cantons in Syrian Kurdistan, autonomous Rojava, in an eventual arrangement which, all proportions being maintained, eerily recalls that of the Munich Agreement.

Let us imagine the worst, the Catastrophic Scenario within the next six months to a year. The AKP is the only authorized party to have engulfed elements of the extreme right. All other parties and political groups will have been banned, the 80 HDP deputies eliminated without trial, all opposition muzzled (Kurdish and non-Kurdish, lay, socialist, atheist, Alevi, feminist, LGBT, pro-Armenian historians, etc,) and its most well-known members will rot in jail where horrific condition have been denounced for years by various Human Rights associations.

Until then, Erdogan, forever flanked by his hopeless Davutoglu, will have implemented a barely ‘soft’ Islamist regime administered through martial law and will have worked his way back into French favors, for example, by offering himself some Rafale aircrafts, in the Marshall Sissi or King Salman style who, moreover, will have become his spiritual and legal mentor. With panache, Erdogan will send a few elite troops for a spectacular operation on Syrian soil with the connivance of ISIS who will accept to play along for the cameras. The Turkish army, treading Syrian soil for the first time (instead of the Rojava Kurds who were until that point the only ones fighting against ISIS) will easily negotiate a small victory for show, conceded for pragmatic reasons in the name of realpolitik.

At the same time, Erdogan will assure the United States that he, Reycip alone, knows how to talk to Jihadists and will easily obtain exclusive rights as mediator. He will calm the whole world by replaying the words of his brave Davutoglu, who already declared in August 2014: The Islamic State is not a terrorist organization, it is a group of people brought together by anger. »

This is how we would find ourselves in a situation comparable to Pakistan, a country blessed by Washington. After financing the Islamist mudjaddins in the days of Zia-Ul-Haq, Karachi continued its support for the Talibans, still active to this day, both on its own soil and in Afghanistan. Following this same logic on Turkish soil, the UNHCR would continue to attend to the two million Syrian refugees, but Ankara would keep official control while delegating management to the small-time bosses of ISIS and consorts. Potentially, the same situation as in Afghan refugee camps in Pakistan. With the results we know.

Let’s push a bit further. Following these events that are still barely avoidable, Turkey would find itself honored with a certificate of democracy, bestowed by big clients such as Dassault, Dyn Corp Int., then rewarded for its diplomatic and military efforts through the annexation of the Kurdish provinces, under the excuse that Turkish citizens live there and call to Ankara for their salvation… Munich 1938? No, but perhaps Ankara 2016 if the current situation deteriorates.

And to conclude. Shortly thereafter, rumors will circulate in Brussels that Turkey, a lot more crediworthy than Greece thanks to credits from Ryad, could join the EU because of its « heroic struggle » against Islamist terrorism and, supreme award, Erdogan’s son Bilal, his financial indiscretions forgiven, would find himself Secretary General of NATO, valiantly taking over from the American Alexander Vershbow who would kindly let him take over as proof of the United States’ gratitude…

And who would come and protest on behalf of a discredited Assad government for the loss of part of the Syrian territory ? Neither Iran nor Russia would risk a war to defend him. Except that… (to be continued, in one year’s time, to the day).

For the time being still, this catastrophic scenario will remain a fiction, more or less, providing the powers choose to finally confront reality. To Hannah Arendt goes the final word : Normal human beings don’t know that everything is possible ; faced with the monstrous, they refuse to believe their own eyes and ears. And it is truly a monstrous situation that is developing, one that imperils not only the unfortunate Kurds and the entire Turkish opposition abandoned by our irresponsible leaders, but the balance of the entire planet.