Turkey • Get ready for a trip to Ubu land 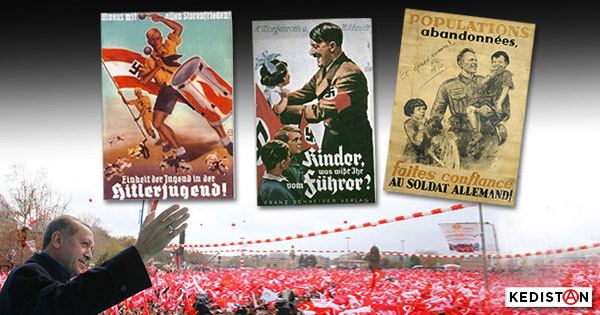 You would need 7 cat lives to make up for the one being burned right now in fear and abjection in Turkey. As if power weren’t enough for him, here’s the Sultan now wanting to turn our children in martyrs for the fatherland.

I noticed I wasn’t the only one who wanted to talk about it, but best to do so while there’s still time.

Parading children in uniform on stage by his side brings back all those propaganda images, from the world wars at the beginning of the Twentieth Century where through fascism, nazism, stalinism pursued   all the tyrants on earth were at the origin of so many massacres and victims throughout all of humanity.

When you start thinking that a new birth is destined to die for a Nation,  and when all of this is wrapped in an islamist beard, you are logically picking up the relay from ISIS and its caliphate in the region.

This is the image displayed in the country these days, from one of the Reis’ speeches to the other, with crowds of ecstatic sympathizers ready to cut the throat on the enemy within and to die against the outside agressor.

Propaganda points to the United-States as the hand flaunting the Kurdish puppet. And it works. Especially since they have a President you wouldn’t invite into your home. Ideas wind their way to each other under the national flag and Erdoğan becomes the successor to the Father of the Nation, prolonging the 1920 national revolution. Great Turkey will know no limits, it will have no enemies, just as in the beginning of the last century and it cement will be islam and jihad against the hateful presumed invader.

The little people, drinking these words in the shadow of the flag and of the statues, dumbfounded by all the cement pushing up everywhere, charged up against “separatism and terrorism”, are ready for the supreme sacrifice. Between little jobs, bigoted morality and schemes, they adulate the chief and denounce the neighbor.

And when, turning on your TV, you hear « Why would the Turkish army go over there to kill civilians? If we had civilians to kill, we would start with Cihangir, Nişantaşı, Etiler, wouldn’t we? They are full of traitors. We even have some in the National Assembly » spoken by presenter Ahmet Keser, on Akit TV, you wonder how far the calls to murder and war will go in the coming weeks.

Who is there left to kill in the eastern towns? All the terrorized populations plunged into misery and precariousness? Those who are in prisons? Their political leaders? And in Istanbul neighborhoods? Those who voted HDP in 2015 ?

You will say I’m painting everything in black and that, according to the TV, consumption isn’t doing badly and that Turkish brands are exporting. Turkey is modernizing and I would be allergic to change and progress?

Two uniforms are melding in the folds of the flag, or even three with that of corrupt business men and politicians. One sells as an islamic identity, the other aimed at children martyrs.

And the State frees European journalists in exchange for weapons. The others, it condemns to life imprisonment.

But don’t worry, you won’t see any of this while sunbathing on the beaches of the tourist hotels, or while walking around with your nose in the air in places designed for sightseeing. Jails are closed to visitors, so are zones of massacres, but the stores are open and the “typical” boutiques also. Occasionally, you will always find a driver in a yellow cab who speaks your tongue and he will drive you somewhere, just for you, so you will have a peaceful souvenir to relate when you go home.

And if you have a bit of ethics left after all, you can practice condescension… Yes, yes, that’s allowed. Your Presidents call on restraint dont’ they, on respecting human rights and freedom of expression. You are therefore entitled to compassion, for the salvation of your conscience. But watch it, no politics!

Vipers’ tongues like mine see evil everywhere, as for Afrin and its olive branch…

And I see this at your hairdresser’s:

“In a unitarian system (like Turkey’s) a presidential system can exist perfectly well. There are examples of this in the world and also examples in history. You see an example of it in Hitler’s Germany” (speech pronounced in 2016)