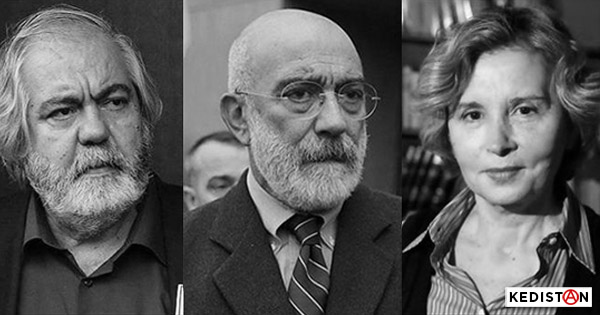 This is how mathematics work in the Turkish islamo-nationalist state, confident in the cowardice of the European powers who pretend not to see the train coming down the tracks.

The German-Turkish journalist Deniz Yücel,  has been released on bail, after being detained for “terrorism” for over a year and whose freedom was publicly requested  in a meeting between the Turkish Prime Minister and Angela Merkel – temporarily back in the saddle. He had the chance of leaving Turkey and is now safely back in Germany.

This was good news for his friends and supporters. We must remain aware of the fact that the terms for the exchange between the Turkish and German governments contain additional concessions and reservations.

At the same time, Turkish injustice pronounced three sentences of mandatory perpetuity in the lengthy trial of protagonists of a so-called “attempt to overturn the constitutional order”, as stated in the medias at the boot of the Turkish government.   There had to be some weight laid on the other side of the scale of injustice.

A mixture of sentences of known journalistic opponents such as the brothers Ahmet and Mehmet Altan, or the 73 year old journalist and writer, Nazlı Ilıcak, along with ex-collaborators of the newspaper Zaman, allies yesterday and enemies today, treated as the “media arm” of the movement of preacher Gülen (FETÖ) provides the opportunity to seal a so-called anti-terrorist pact with six life-time sentences in Turkish prisons. Of course, the considerations by the prosecution are grotesque, speaking as they do of “subliminal messages” delivered in a television studio prior to the fake failed putsch in 2016.

This serves as a clear warning to European “human-rightists” who still refuse to consider any sanctions against the AKP regime ‘a vital partner in the Middle East’. These same governments keep silent while Afrin is attacked, and when the villains’ agreement on refugees concluded with Erdoğan produces its murderous effects in unwanted world misery. Even those unanswered laments are trampled. And this is when the General Secretary of the European Council, to which Turkey is a party, insists on the respect of decisions of the constitutional Court, which had ordered the liberation of Mehmet Altan, a short time ago.

The constitutional order is Erdoğan’s, warlord and clan boss, now plunging forward in a clear pattern of “all the common graves the republic spends its time in digging and covering over with the soil of forgetfulness” to use Aslı Erdoğan’s fine expression, she who is also threatened with a life sentence, and protected, luckily, by her semi-exile.

These sentences announce upcoming ones, as European governments denounce their own agreements, retreat and fall into divisions, the first of these manifesting today in the face of exactions by the Turkish State and free Syrian islamists gathered against Afrin.

The need for the regime, and the political choice made by Erdoğan of tensing the domestic situation once more in order to consolidate his power, threatened by a number of crises now becoming visible, also rests on the firm application of injustice.

Succeeding purges and decrees have fragilized and divided the populations, installed a muffled terror, invisible to tourists, yet omnipresent.

Recently, a “contract” was put out against a Belgian journalist, Bahar Kimyongür, and a price officially put on his head.   This didn’t make more of stir outside his borders than would a Belgian joke. Today, the least we could expect from a Southern  business woman, now France’s minister of culture, would be some Act for condemned writers whose names appear on her catalog.

These judiciary proceeding, all resting on the sacro-sanct accusation of terrorism cannot be deciphered in simple black and white. As with the immense majority of trials against journalists and writers, these investigations have roots in the settling of old accounts over the Turkish deep state, old affairs of the republic, of access to power and of the corruption of the ones and of the others, on a background of “republican democracy” that has never existed.

The Turkish nation-state is in crisis, as are all the nation-states in the Middle-East; they will continue so as long as tensions relating to identity and religion as well as the nationalist violence of its power will pursue its mortal dialectics with old Western democracies ravaged by unbridled liberalism.

The ostrich is vulnerable when it digs its head into the sand.