“Turkey sheds blood in Afrin with weapons supplied by the West” 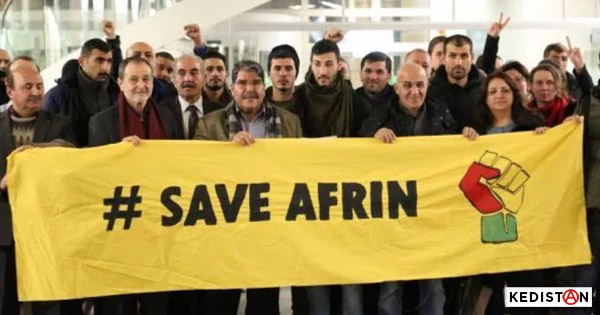 During the conference by the Solidarity with Afrin Platform in Geneva to which participated Salih Muslim, spokesman for the PYD (Syrian Democratic Union Party), he criticized the position of Western countries supplying weapons to the Turkish Army.

“Turkey sheds our blood with the weapons you supply”, Muslim declared, adding they were not expecting Western countries to fight against Turkey but asking them to act in accordance with international law.

The spokesman then said that the peoples of Afrin are defending their lands and their homes.

Muslim called the Turkish attacks in Afrin a demonstration of “a will to take revenge for the defeat of ISIS in Raqqa and Deir Ezzor” then he stated that Turkey invaded Afrin with ISIS and other radical islamic groups. “All the radical groups in Damascus and other Syrian regions were brought to Idlib. This was done with the help of agreements signed in Geneva and during other meetings. Erdogan presently hopes to install these groups in Afrin for, in this way, he will be able to use the region. He would like to change the demographic structure and use it against the Kurds. He hopes to take advantage of Jihadist groups that are a threat for Europe and the Middle East. This is how the killers in Great-Britain, in France and in Germany were able to cross into Europe from Turkey.”

“We are not telling you to fight against Turkey”

Muslim declared: “We are not telling the West to fight against Turkey, or to stop commercial trading with it, but Turkey is shedding our blood with the weapons you supply. There are United Nations resolutions and rules of international law. These weapons cannot be used to massacre civilians. The United Nations’ Security Council says so. Does this mean that those dying in Afrin are not civilians? Those living in other countries are civilians but the Kurds dying in Afrin are not? Why do you keep silent? This is where your vision for democracy and its institutions breaks down. Turky is killing civilians, why don’t you act?”

Since the start of Turkish operations in Afrin, 180 civilians have been killed and 400 wounded.