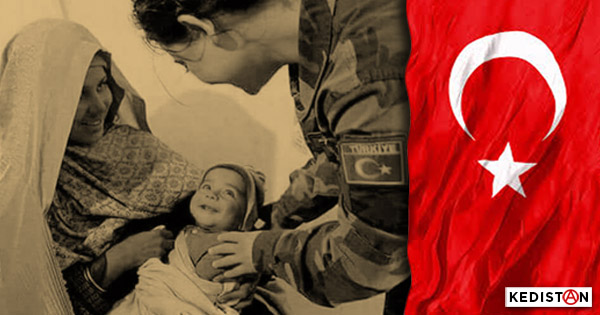 Everything is happening in Turkey as if, from a permanent state of emergency, the situation was sliding into a state of domestic war, made possible by the constitutional changes of 2017.

The budget voted for 2018 sets aside a huge amount for defense and armament. According to official ministerial sources, investments in the defense industry sector have reached close to 35 billion dollars in fourteen years.

The army’s superpowers and those of its Kemalist leaders were suppressed during the constitutional change-over in 2010, following also on a dismantling via affairs and trials involving the general staff. The 2017 constitutional reform which established the absolute presidentialization definitely landed the army in the President’s sole purview. The Erdogan family itself has become financially involved in the development of the arms industry in various ways.

The Turkish defense industry’s capabilities are increasing. 26 projects will be developed in this context. A Prime Minister declared as early as 2016 : “Turkey intends to equip its army with Turkish-produced weapons by 2023”. 2023 being, as we recall, the centenial of the Turkish Republic. So the Turkish government is proceeding to the testing of material in Afrin, so to speak.

The development of a war industry in a country such as Turkey, a member of NATO and already “aided” in this capacity, was scrupulously analyzed in a complete report done for an institute by a French researcher, which you will find here (in French), even though she does not analyze the matter from a political viewpoint, of course.

The relay taken by this industry from the sector of “major construction” soon coming to an end will be most welcome for an overheated Turkish economy. Corruption will also follow the movement, there can be no doubt about it.

Concerning these major projects to which France boastfully contributed in 2017 in the form of development funds for Istanbul, we note the charming way Erdogan writes off the 400 victims of work-related accidents on the new airport as profits and losses for the Nation. Close to 400 “fell martyrs” to the new Turkey of 2023. Erdogan must not have spent too much time thinking about these martyrs to progress during his inaugural flight last Monday.

“The Sultan looks toward the future of 2023, centenial of the “national revolution”.   He pictures his Turkey as liberal, Ottoman in his way of dominating the world, bigoted and very nationalistic. “We could draw him in profile, with a crescent behind him, looking toward the Mecca of Swiss banks…”   (A quote from Mamie Eyan).

Struggles against these various destructive projects were smothered, little by little, by the state of emergency and the climate of fear it established.

Decrees followed upon decrees, purges followed purges, following the putsch “blessed by heaven” in 2016 which allowed the presidential clique to consolidate its power. The trick now being to hold on and draw full benefits from it. This is the corollary to any absolute power, especially in a country of close to 83 million people.

Erdoğan would certainly be happy to do without the constitutionally mandated elections between now and his wished for consecration in 2023. Erdoğan will surpass the number of years the founder of the Republic and first President Mustafa Kemal Pacha (Atatürk) was in power. He has successfully taken on the nationalistic militarism of this republic, and also instrumentalized the Muslim component at its origin.

The building of “ethnic”, social, cultural and religious tensions in society and in the entire country that Erdoğan has applied in the constitutional framework of elections, each time his hold on power and the achievement of his goals were at stake, culminated in the period following the failed putsch of July 2016.

The permanent state of emergency, government by decree above even the Constitutional Council, accompanied by gifts to the financial sector and corruption  aren’t enough to satisfy the appetites and criticism of the ultra-nationalists, visibly. Here then is Erdoğan who by words and actions topples Turkey into a “state of permanent mobilization“.

What better means are there for that, including threats against a few islands of yesterday’s enemy, Greece ?

It may seem grotesque but if the information wasn’t filtered through “the good relations that must necessarily be maintained with an essential partner” (European words), we would be beyond deploring “Turkey’s sliding toward a strong regime that could trample democracy “.

Those are indeed the sound of boots replacing the cries of agony of ISIS’ victims. They are orchestrated by Turkey taking shots at the diplomatic game for the moment, with its population held hostage, more than half of which is already suffering from the Stockholm syndrome.

This Islamo-fascism, to use the words of a former French Prime Minister who also liked war, is one of Erdoğan’s domestic calling cards, in order to stay synchronized with the social bases and the political forces supporting him.

“The olive branch” Erdoğan is brandishing against Afrin, with international complicities, will only reinforce the state of war, even if this is convenient for the time being for the said “great powers, as it allows them a breathing space in their disagreements over the great sharing of the spoils of these wars.

All anti-fascists would be well inspired to become aware of the transnational effects of this Munich in the face of Erdoğan, while the European extreme right-wings are still practicing an anti-Turkish racism a bit everywhere. Political alliances of interest are quick to come together, and often flow through liberal governments more interested by business than by human rights and Peace.

Once chlorinated, the corpses will stay clean, don’t worry.