Diyarbakır • Sur and the erasing of memory 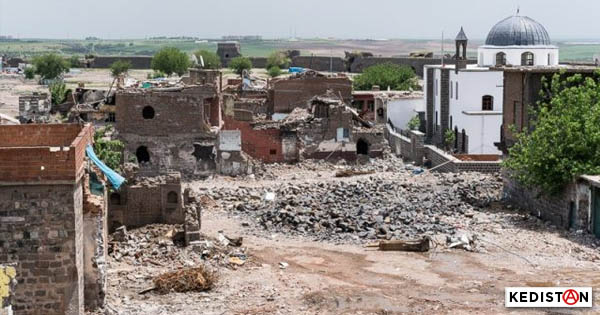 Archeologists have insisted on being involved in the demolition and reconstruction projects carried out in the historical neighborhood of Sur (Diyarbakır), destroyed by Turkish governmental forces.

As the demolition was completed of almost all the buildings (in the Sur neighborhood of Diyarbakır) and infrastructure constructions underway for new buildings, Büşra Cizrelioğulları, spokesperson for the platform « No to Demolition in Sur » called on experts and archeologists to come and watch over the work in Sur in order to protect the archeological treasures buried there.

Speaking to Mezopotamya Haber, Cizrelioğulları reminded readers that Sur is a historical town in a protected zone and declared « Althought the demolition process in Sur is supposedly done on a scientific basis, we notice that no scientific research has been conducted. There should be experts and archeologists here. But as can be seen, the work is done without any experts on hand. »

« Every meter in Sur is laden with history. We cannot know what we will discover after the demolitions or the digs. We call on immediate digs. Each time they dig up from the earth a piece of history, they could be touching an entire historical strata. The government should be aware of that, » Cizrelioğulları declared.

Cizrelioğulları also criticized the lack of transparency regarding the controversial building plans in the historical neighborhood of Sur and declared that no one knew what type of buildings were planned for the demolished zone. Members of the « No to Demolition in Sur Platform » have therefore called on experts to examine the region and have asked for details on the construction plans. They have received no answer at this time.

Cizrelioğulları also declared that the right to information had been denied by Turkish authorities and added : « We see that they (the Turkish civil servants) make plans and proceed without bringing them to anyone’s attention. We will continue our attempts to discover to what use these new constructions will be put. »

Sur was the scene of intensive urban fighting between the Turkish security forces and the armed groups of self-defense of the Kurdistan Workers’ Party (PKK), following the declaration of autonomy on December 3 2015. The fighting lasted for three months and, as a result, a section of Sur was demolished by the governmental forces. Even before the end of the fighting, the Turkish government had announced extremely controversial plans to rebuild the old town of Sur.

From which we can see that, following the suspension of elected members and the seizing of control, the AKP government pursues in all impunity its « urban project » with total disregard for the history and culture of the spaces it wishes to re-define.

Article inspired from a brief publication in Mezopotamya Haber