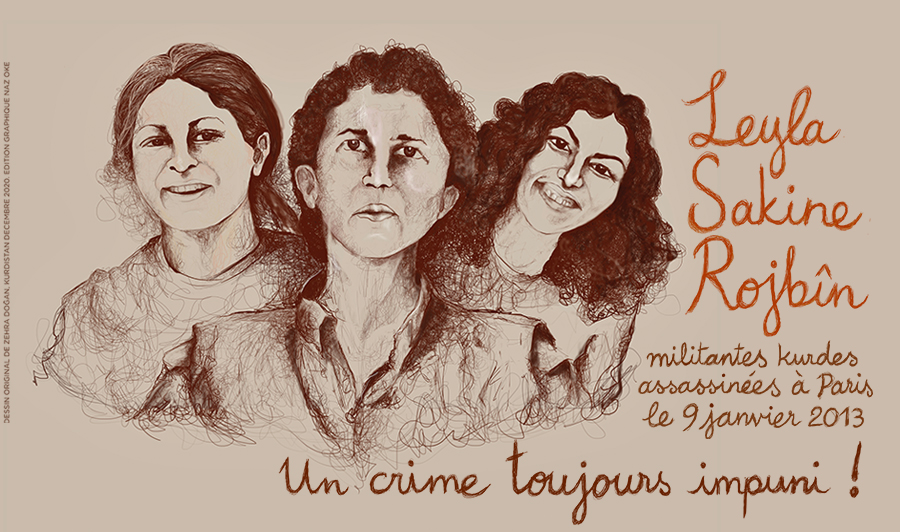 Sakine Cansız, Fidan Doğan and Leyla Saylemez, 3 women, 3 Kurdish militants, were assassinated together, in the 10th arrondissement of Paris, in the night from January 9 to 10th 2013. A sponsored killing with an assassin the police did not have far to search for. But, to this day, 8 years later, nothing has been done as a reparation in justice.

The killer died of cancer shortly after his crime. His averred link with the “Turkish services (MIT)” were unveiled but did not lead to a true serious and comprehensive inquest by the French and European police forces. Today, despite a solid and established array of presumptions, the lawyer for the three victims and their supporters are still fighting to obtain a complete examination of the case that would lead to a re-opening of a public trial incriminating the true sponsors and thus, the main contractor, the Turkish government. As a reminder, in the year of this assassination in the heart of Paris, a so-called leftist socialit government was in power, with a certain Manuel Valls as Minister of the Interior who declared at the time that “the anti-terrorism and anti-criminality brigades were mobilized in order to shed the light on this totally intolerable act.” Yet, the ignoble rumor of a “settling of accounts” within the Kurdish movement was relayed during the inquest, widely suggested through the Turkish Embassy in Paris.

The so-called “resolution process” was then being carried out in Turkey. A peace dialogue had been implemented by the imprisoned Kurdish leader Abdullah Öcalan, still under detention since 1999 on the prison-island of Imralı. “Öcalan and the Turkish government have started a peace process, they want to dialogue but there are parties against the resolution of the Kurdish question and who wish to sabotage the peace process”, was also said at the time. These declarations saw their meaning diverted in order to inciminate the Kurdish movement itself, guilty in this way of settling strategic divisions. In brief, despite the arrest of the one who carried out these three feminicides, confusion was willfully maintained so as to keep the inquest away from the obvious sponsors who barely hid themselves.

Since then, investigations implicating the MIT in Europe in other affairs or operations preparing assassinations of Kurds have established the links and highlighted testimonies, clearly revealing the personality of the three women’s assassin. And yet, the call for justice remains unanswered after 8 years, with Kurds of the diaspora and their supporters demonstrating every year on the anniversary of the event.

The peculiar context of 2020 and the less-than-diplomatic exchanges between the French President and Erdoğan on a variety of matters might have raised the hope of some progress in this case, thanks to a greater political will. But such a will is absent as we know, as it was under the earlier French government, because of the European policy directed toward Turkey.

Here is the call for 2021 from the Kurdish movement in France:

A CALL TO DEMONSTRATE

In the night of January 9th to 10th 2013, the Kurdish militants Sakine Cansız, Fidan Doğan (Rojbîn) and Leyla Saylemez  were found lifeless in the offices of the Kurdistan Information Center in Paris, coldly executed with several bullets to the head.

A number of clues revealed in the inquest, as well as documents published on internet, established that the assassin, Ömer Güney, arrested a few days after the events, had acted for or the Turkish secrete services (MIT). Investigations also undeniably revealed the murderer’s membership in the Grey Wolves, the fascist Turkish movement the French government recently decided to prohibite, considering it “particularly agressive, not to say more”, following extremely violent demonstrations against the Armenian community.

However, by delaying judgment on the matter and allowing the sole accused to die of a serious illness on December 17 2016, one month before his trial, French justice missed a crucial opportunity to finally bring to justice a political crime committed on French territory!

The promise by the government to bring to light all the facts concerning these assassinations was soon forgotten. Always anxious to maintain their relations with Turkey, French authorities did not even have the decency of meeting with the families of the victimes or representatives of the Kurdish community.

And now, through the impunity awarded these odious crimes, France has allowed Erdoğan to pursue his islamist and fascist infiltration of French territory, through the instrumentalization of mosques, the creation of branches of the AKP and the propagation of the PanTurkish ideology. So many vectors of a dangerous meddling inside France, which only now seems to be waking from a long slumber and beginning to denounce.

However, by maintaining the criminalization of Kurdish political militants through judiciary measures or absurd administraative measures, France does nothing other than to serve the interests of Turkish islamo-fascism and reinforce Erdoğan’s position.

Following a claim filed in March 2018 by the families of the three Kurdish militants, a claim based mainly on revelations of MIT agents, a new judge has been charged with studying the case. We expect that French justice will finally have the courage to judge and condemn the sponsors of these political assassinations.

The assassinations of Sakine, Fidan and Leyla are the most shameful manifestation of the nuisance value Erdoğan has developed on French soil, thanks to a French policy of complacency.

It is not enough to prohibit the Grey Wolves or to threaten Turkey with sanctions that never come to conclusion. If France wants to fight against the expansion of fascism and of Turkish political islam, it must first and foremost judge the crimes committed by the Turkish regime on the national territory. This is the first step, a fundamental one, in order to say STOP to Erdoğan.

Our friend Zehra Doğan, Kurdish artist and a member of a team, offered in solidarity to produced for 2021 a visual that will be displayed and used as a banner for the January mobilization. This visual will be installed by the mayoralty of the the 10th arrondissement in Paris. Called upon to help, the Kedistan team glady contributed, Zehra currently being outside Europe. Through this contribution she wished to put her notiriety as a Kurdish artist at the service of this call for “turth” and this demand for “justice” for the three murdered women.

She is thus contributing this original drawing, done in Kurdistan. And those who will soon read the graphic novel she realized clandestinely in the prison of Amed, soon to be published by Editions Delcourt in early 2021, will take note of her deep attachment to Sakine Cansız, notably, of whom she talks abundantly since she was imprisoned and tortured in this same sinister Amed Gaol, also known as Prison N° 5. The original plates were on exhibition at the 2020 Berlin Biennial, and will be exhibited again in February-March at the Maxime Gorki Center, again in Berlin.

A small additional stone, in order to raise awareness in the public at large and, in this specific instance, to contribute in her own way to the January mobilizations.

The entire team at Kedistan joins the CDKF appeal published above, as well as that of “Kurdish women in Europe”.