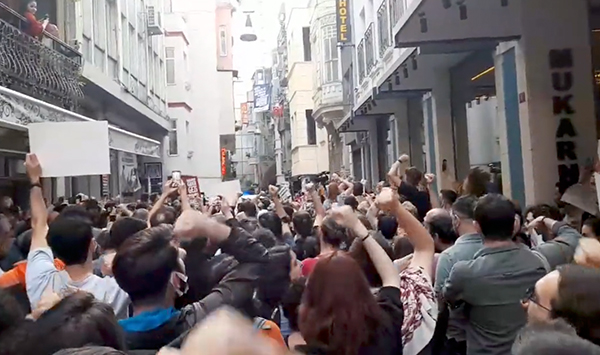 Aggravated perpetuity for Osman Kavala and 18 years for 7 other people accused in the Gezi trial.

Businessman and human rights defender Osman Kavala who was accused of “having organized and financed” the 2013 Gezi demonstrations has been sentenced to aggravated perpetual imprisonment during the hearing on April 25 2022. Seven other accused were sentenced to 18 years in prison in this same trial, for “aiding” in the commission of this crime.

The issues concerning country-wide anti-governmental demonstrations in 2013 were brought to trial again after a court of appeals had annulled last year’s acquittals. This new trial thus rendered verdicts based on a conspiracy theory as characterizing a social movement of protest.

The defence lawyers stated that the bill of indictment did not contain any concrete evidence and was based solely on assumptions expressed by the prosecutor.

One of the judges was revealed as being a former potential parliamentary candidate for the AKP Party currently in power.

The seven other accused were sentenced to 18 years imprisonment for having “aided” Kavala in his pseudo “conspiracy against the State”.

A call to demonstrate was raised on Tuesday April 26 for 7 PM Istanbul time, in the Beyoğlu neighborhood near Taksim, in front of the TMMOB (Union of Turkish engineers and architects’ Chambers). The crowd was already gathered far before the scheduled time in order to chant “This is just the beginning, the struggle carries on!”

As early as in 2015, participants in the “Gezi events” had already been sentenced.Dès 2015,

A new Gezi trial was held again beginning on May 21 2021 after the Court of Appeal had annulled the acquittals pronounced by the tribunal at the first trial. Incarcerated for over 1 200 days, the businessman and defender of human rights Osman Kavala along with the other accused appeared before the judge of Istanbul’s Criminal Court in Çağlayan for “having attempted to overthrow the government”. Here is a brief survey of the judiciary process:

Who was being tried?

Osman Kavala, Mücella Yapıcı, Can Atalay, Tayfun Kahraman, Ali Hakan Altınay, Yiğit Aksakoğlu, Yiğit Ali Ekmekçi, Çiğdem Mater Utku and Mine Özerden who were acquitted at the first trial; and Can Dündar, Mehmet Ali Alabora, Ayşe Pınar Alabora, Gökçe Tüylüoğlu, Handan Meltem Arıkan, Hanzade Hikmet Germiyanoğlu and İnanç Ekmekçi whose files had been split off but were then re-introduced into the main trial.

Although he had been acquitted at the first Gezi trial, Osman Kavala was kept behind bars in Silivri prison in the outskirts of Istanbul. Yiğit Aksakoğlu also spent 220 days behind bars for this second Gezi trial.

Who were the wronged parties?

In the previous Gezi trial where the defenders of rights were acquitted, the members of the cabinet of the 61st mandate, created in 2011, were designated as the plaintiffs in the bill of indictment.

After establishing the Party of the Future, Ahmet Davutoğlu announced he was withdrawing as a plaintiff from the penal matters linked  to “the crimes committed”.

The President of the DEVA party, Ali Babacan, also declared: “I am not a plaintiff in the Gezi trial, nor am I intervening in any way. Thinking they were all wronged, the prosecutor wrote down the names of all the government members of the time.”

What are the charges against the accused?

In the first bill of indictment – a document of 657 pages – Gezi was defined as being “an insurrection for a coup d’état”. The accused were charged with “having organized and financed the demonstrations”. They were charged with “attempting to overthrow the government”, “material damages”, “damages to places of worship and to cemeteries”, “violation to the law concerning firearms, knives and other implements”, “aggravated pillaging” and “violation of the law on the protection of cultural and natural property.”

In annulling the acquittals, the court of appeal also required that a penal charge be added against the accused  stating they had “violated bill no. 2911” concerning meetings and demonstrations.

According to the bill of indictment, 16 accused were separately at risk of between 606 and 2 970 years of imprisonment.

In July 2013, 26 persons, including Mücella Yapıcı of the Chamber of Architects and Ali Çerkezoğlu  from the Istanbul Order of Physicians were arrested. Although they were liberated after submitting their statements, these defenders of rights were tried in March 2014 on the grounds of “founding and leading an organization”. All the accused were acquitted during the trial that followed before Istanbul’s  33rd Criminal Court on April 29 2015.

Following on Muammer Akkas, Istanbul’s prosecutor Yakup Ali Kahveci  proceeded with the bill of indictment. Although it contained evidence gathered by Akkaş, the inquest was completed in 2019; the first hearing occurred on June 24th of that year. Arrested pending his trial, Yiğit Aksakoğlu was freed at this hearing. A few days after the second hearing, the Council of Judges and Prosecutors (HSK) modified the make-up of the tribunal council responsible for the matter.

Consequently, Galip Mert Perk was named as presiding judge and Talip Ergen as a member of the board of administration. While the HSK did not modify the appointment of Ahmet Tarık Çiftçioğlu who had pronounced himself in favor of “maintaining the arrest” of Osman Kavala and of Yiğit Aksakoğlu, the member of the council who had expressed a dissident opinion was moved to another court.

A string of events and changes of judges and of modifications at the council of judges thus took place during the whole course of the investigation.

When examining Osman Kavala’s individual appeal, the European Court of Human Rights (ECHR)  rendered its judgement of a violation of rights on December 10 2019 stating that Osman Kavala should be liberated immediately.

At the final hearing of this first trial, on February 18 2020, all of the accused, except for those who were abroad, were acquitted of the charges against them. Despite this acquittal and the verdict of the European court of Human Rights, Osman Kavala was re-arrested under other charges.

Why are they on trial again?

Following the acquittals in the Gezi trial, the President of Turkey and  President of the Justice and Development Party (AKP) Recep Tayyip Erdoğan spoke at a Party meeting. Targeting Kavala, he declared: “The person who instigated Gezi is behind bars. They tried to acquit him through a maneuver.” Shortly after this declaration, the Council of judges and prosecutors (HSK) launched an inquiry against the three judges who had been members of the council at Istanbul 30th criminal court.

The 3rd Criminal Chamber of Istanbul’s regional court of justice, the court of appeals, annulled the acquittals rendered by the local tribunal, Istanbul’s 30th Criminal court on January 22 2021. Referring to the accusations  in the bill of indictment, the tribunal justified its annulment by indicating that some evidence such as “the messages of the accused on social media, declarations to the media and chanted slogans” had not been taken into account in rendering the decision.

The final hearing in the second trial took place in two sessions on April 23 and 25 2022. Osman Kavala businessman and defender of human rights who had been kept in prison for four and a half years despite a verdict of the ECHR was thus sentenced to aggravated perpetuity for “attempting to overthrow the government” but he was acquitted of the charge of “spying”.

Mücella Yapıcı, Çiğdem Mater, Hakan Altınay, Mine Özerden, Can Atalay, Tayfun Kahraman and Yiğit Ali Ekmekçi were sentenced to 18 years of prison for having “aided in the commission of this crime”.

Amnesty International has denounced the prison sentences in the matter of the 2013 demonstrations at Gezi Park.

The decision announced on April 25 in the matter of demonstrations at the national park of Gezi in 2013 provoked criticism from authorities of the European Union (EU), the European Parliament and of Germany.

Josep Borrell, vice-president of the European Commission and high representative of the EU for foreign affairs, denounced the judgment in a Twitter post. “The sentencing of Osman Kavala to perpetuity by the Turkish tribunal along with the heavy prison terms for other accused  display maximum toughness” he wrote.

France officially called for lifting the charges against the detainee and his immediate liberation.

The German Minister for Foreign Affairs, Annalena Baerbock also published a written declaration, stating that the judgment was in “flagrant contradiction” with the Norms of a State under the rule of law, and of Turkey’s international obligations by virtue of its membership in the Council of Europe. The minister called for Kavala’s immediate liberation.

In a written declaration, the spokesperson for the US State Department, Ned Price declared that the United States were “deeply troubled and disappointed” by the verdict rendered on  April 25 by the tribunal in the Gezi trial.

As we can see, while the Turkish regime was hoping that all eyes would be turned toward Ukraine and the Turkish President’s involvement in attempts at “negotiations”, such was not the case. Nonetheless, one can easily consider that these “condemnations” of the verdicts will not have any consequences for all that.

Initial mobilizations are taking place in Turkey. There is much to wager that the pseudo opposition preparing itself for the next elections will attempt to temper them, especially since the HDP Party will be strongly opposed to this verdict, upsetting the “alliances” for the next presidential elections. A matter to be followed, in other words.

In the early 2000 years, there were many Turkish citizens who wished to “try” a new regime. They thought the old nationalism would temper the “islamists”, once again. Instead, we now have a synthesis of these two tendencies producing this type of judgment assimilating a popular revolt, which is what the Gezi movement consisted of, to a conspiracy, and sentences opposition figures to life imprisonment or sentences of 18 years duration.