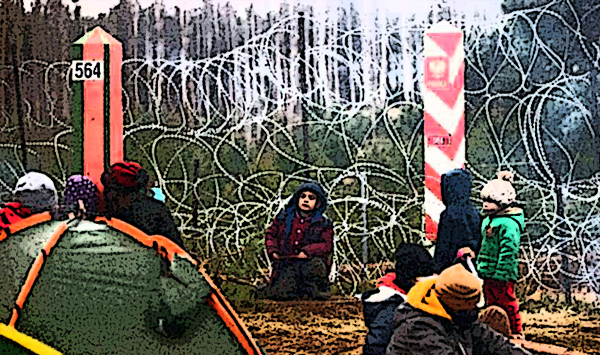 The fate devolved to the word “solidarity” these days resembles that to which the notion of “secularism” has been subjected.

If one argues from a universalist stance based solely on a colonization wish of good gaining the upper hand against evil, one easily falls into the inquisitorial values of suprematists for whom the non-white becomes an object of suspicion, equated with the intruder, the invader.
In short, de facto racism is “excused” in the name of “common values”.

Thus, while an exodus of millions of Ukrainians is unleashed by the brutal and unscrupulous aggression carried out by the regime in power in Russia, the expressed “solidarity” can be “naturally” deviated by the strong influence of this suprematist ideology in Europe and elsewhere. “Sorting of migrants” will continue at the borders and, as a consequence, these “new migrants” “so similar to us”, will replace the older ones in the greeting centers.

The huge solidarity expressing itself does not go so far as to destroy the racist and xenophobic ideology dictating the closing of borders to migrants “from elsewhere” by European leaders, as has been the case for years. None of these leaders will explain why a war victim from over there, weighs more or less than another from the Middle East or Afghanistan or, worse, another who is fleeing the consequences of colonial pillaging and climate changes…In the case of Ukrainians, the reasons invoked will be “urgency” and “proximity”.

As far as proximity goes, the recent exploiting of migrants on the border of Belarus, with the total closing off of the EU along with the start of construction of walls, invalidates the argument, except for displacing it to the field of “origin”. In terms of urgency, by moving the cursor to the Mediterranean, one immediately sees how sea rescues done by the NGOs are delayed, incriminated, obstructed.

Hailing the “solidarity” shown by local collectivities, associations, individuals and even administrations, does not mean closing one’s eyes to a “double standard” that changes everything, even if the humanistic urge impelling most people at the onset is devoid of such double standards.

In Calais, seeing someone who is a regular proponent of the double standard rush to meet the media is enough to make this clear. And if tomorrow, because this aggression in Ukraine continues, and a greater number of Ukrainians seek refuge, wishing to take their chances because English-speaking, will their tents get lacerated? Who will handle the triage? Based on what criteria? Because visa protocols continue to apply in Great Britain.

Mid-March, a “special status” directive for “temporary protection” was established urgently, and with good reason, based on existing agreements between members, dating back to 2001, yet never activated during the peak period of exodus by the victims of the war in Syria. This status gives the new arrivals the right to remain in any country of the EU as well as an access to the labor market, to health care and schooling. It is renewable for three years. The ones requesting it must justify of their “Ukrainian citizenship”.

A huge number of these refugees are women and children. Schooling for the children is a given. So is their immediate provision of a shelter. Being allowed to work in order to insure one’s subsistence is a minimum. So why is this not the rule for all migrants? Why is the right to free settlement for all people victim of war, persecutions, poverty and destitution caused by climate change and the pillaging of resources, considered foul language while chatter continues unchallenged in TV studios about the “great replacement”?

All those who proclaim defending human rights in true universality, at the very opposite of orientalism, or the sharing of “common occidental christian values” can make use of the strong and spontaneous emotion caused by the murders and exactions of an occupation force sent by the Russian regime, in order to explode this hypocrisy…

In French the word “solidarity” has the following definition: “relationship among people creating a moral obligation of mutual assistance.”

Both in law and in fact this principle is totally flouted, both through the pressure exerted by racist and xenophobic ideologies and through specific economic interests linked to capitalism.

Today’s Ukrainian refugees may become tomorrow’s “replacements” of workers already held in contempt and underpaid in a racialized social sector based on “origins”.
This class-driven society has always integrated ’migrations’ into the poorest social levels. The collapse of the colonial model provided manpower to the powerful. Wars completed the picture. Some supremacists consider we have reached a “breaking point”. We’ve been hearing this discourse for half a century and it has greatly penetrated western societies, to the point of springing forth as “evident” in the mouth of elites forged in this capitalist system.

Yet, fighting against this does not even appear to be a necessity anymore, judging by the political jousting filled with “yes, but…”

And when in another aspect of “solidarity” and in the name of a certain notion of “peace“, one even denies the Ukrainian people the right to resistance, we are legitimately entitled to wonder if tomorrow, there won’t be the same kind of quibbling around the “refugees”, once the immediate jousting will be over.

So let’s not fall into these traps opposing refugees and migrants the ones against the others, as one would oppose miseries and destitutions the better to exonerate their causes.

None of these migrants carry a greater weight of victimhood than another. Color or origin have nothing to do with it. Nor does the nature of the aggressor, or matters of cultural and religious proximities.

This imperial war by Putin will leave no one unscathed, this massive exodus of populations will have profound repercussions in the coming years. Nation-States, always quick to “assimilate” will no longer be able to satisfy themselves with their national novels woven around the names of illustrious ancestors.

More than ever, this elementary solidarity with Ukrainians should be an opportunity to take on the entire debate about human migrations, their causes, their duration, and all the efforts they require and will require in the future.
Capitalist globalization has managed to organize world movements to its advantage when it comes to the circulation of merchandise and the profitable division of labor. But we cannot rely on it to resolve the consequence brought on by its own crises and wars.

At a minimum, by exercising solidarity with those displaced by war, it is possible to apply concrete pressures on politicians even on those who claim to be “leftists”, “ecologists” or “progressives”, in order to break through the glass ceiling imposed until now concerning all migrants.

Finally, returning to a sordid Franco-French electoral debate, and knowing how raising this question will not provide electorally-minded dividens, except where it follows the trend of the current dominant ideology, one can only wish that, if brought up in these terms, it might allow for a second round of ballots from which the hard right would be excluded, barring anything better.