Fehim Taştekin • Brothers, sisters, hold on to your sanity! 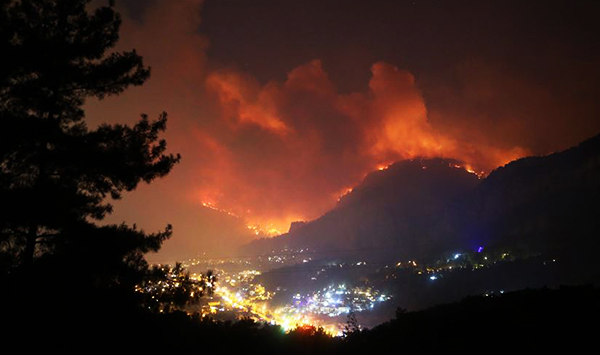 From the French translation of Fehim Taştekin‘s article in Turkish, published on Duvar on August 2.

We are going through days in which we must concentrate on keeping our sanity.

Our brains are singed; singed by those confiscating the country, the mafia regime, the arrogance, selfishness, ignorance, inefficiency, negligence.

Our hearts are tired of racism,  of hateful words, discrimination, brutality and the thousand shades of evil.

Now, our lungs are burning; forests disappear with their entire ecosystem, all their living beings, trees, fauna, flora…

He lines up the excuses for the fact the State does not have a single plane to fight forest fires. Yet, he put 13 planes at his personal  service, just for his “reputation”. He gives the reasons why they let the salvage planes of the Turkish Aeronautic Association (THK) rot away 1Since the collapse of the Turkish lira in 2019, the lack of State funds forced the interruption of maintenance on the planes..

Everybody is at fault, himself excepted. In order to keep our sanity, we seek shelter with the four, five people whose kindness moves them to act, on the immortality of firefighters battling the flames.

Italy, Greece and Turkey are in the same geographic belt. Yesterday, there were 299 forest fires in Italy and 58 in Greece. The last known figure of fires in Turkey stood at 112. Greece is about one-sixth the size of Turkey. It has 39 planes fighting against the fires, Turkey has zero. This reality is like a knife plunged in everyone’s heart.

He has answers to everything. For example he says “the root of the problems concerning the planes is that the THK responsible for this task for years was unable to replenish its flotilla.”

But for notoriety’s sake, he has palaces built that eat up the budget, winter palace, summer palace… For this, the budget provides. The palaces and mansions that were the pride of the Ottoman sultans in Istanbul are not enough for him!

In any event, as long as the subjects keep quiet, the incumbent is happy! The bags of tea they caught on their heads were enough to excite them! Ambitions of greatness spill over to the outside. Despite the Cypriots, he claims he will build another useless and futile palace in Cyprus. All the disasters are not the result of a lack of resources, but because they consider the entire wealth of the country as their allotted share of the looting. When they see no profit motive, there are no measures, no investments. Whereas links to profits call for deforestation, not conservation.

When the State claims it is great, it is. It is great, it is supreme, it is all-powerful. But when it’s a matter of water, of the valley, of the peasants’ forests, it shrinks and becomes cruel.  “THY flies to 58 different destinations in Africa”, he brags. He proudly negotiates from one market to another the drones manufactured by the family.  Recently he said “We are now the third or the fourth country in the world in terms of drone production, IHA, SIHA and TIHA”. With military adventurism in Syria, in Libya, in Karabagh, he creates the myths of the “Great State”. He  peers into the mountains of Iraki Kurdistan 24/24 and 7/7, running dozens of planes night and day. A while ago, he announced that national planes would take to the sky in December 2023. Now he tells his subjects “hold your breath, we’re about to go to the moon”. But Suleyman the Magnificent does not have a single plane with which to protect, maintain, save his forests!

The world map of forests is on fire. Just as it is in the seismic zone, Turkey is also in the fire zone. For years, there has been no ongoing preparation for this crisis taking on greater and greater magnitude with climate warming. Quite the opposite, an insatiability, a frantic feeding frenzy finds every project attacking nature growing at the speed of light. Lots of words, no precautions! Because the Califate was interrupted by the Republic, he systematically empties and collapses every institution associated with the founding will. THK is at the top of the list. Instead of the THK flotilla that was not renewed for want of 34 million Turkish lira, for the past two years, he has laid out 287 million for the rental of Russian planes.

And they do not hesitate to conspire in order to maintain their damning conception of politics. One section of the power apparatus spreads racist hatred against the Kurds, using the fires as a pretext and setting fire to the motor of the nationalist-islamist coalition. A theater production in a madhouse! A party to flatter him, his gangs, his clique of profiteers and a nightmare for all the others. 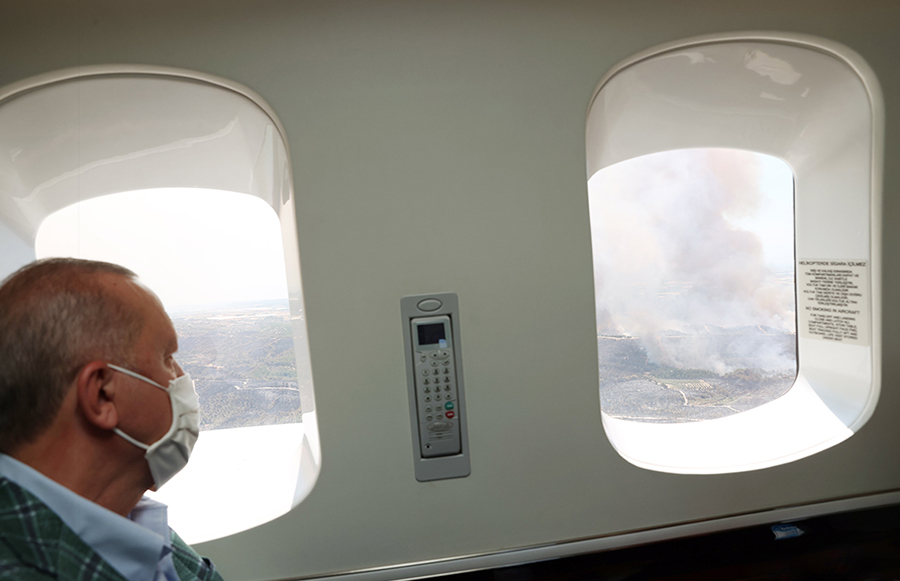 In his plane from above, Erdoğan “studies the situation”.

For 20 years, he’s been selling a tale to the whole world: the leading country, the forefront of the Islamic world, the voice of the Umma 2Thee community of Muslims, of all countries and origins. A tale of appropriation beginning in Kosovo and in Bosnia, spreading all the way to Jerusalem, Damascus, Bagdad, Kabul. Great Boss of Providence! An undeclared claiming of a new Califate. No returns, of course ! Apart from a handful of Islamists, nobody gives a damn!

A specter spilling over borders, a lot of noise but the interior is empty. Cadres at his orders are incompetents, the speeches disconnected from reality. Aren’t the encouragements and the speeches transforming the country into a basin for the gathering in of refugees a product of this sick logic? The Calif’s land is open to all! But by pretending to protect those taking refuge, by stomping on them, despising them, exposing them to racism, transforming them into cheap labor, by using them to blackmail Europe and extort more money, all this is in the Calif’s books ! All that’s left in the lands seized with the help of their world masters, are instability and irregular migration.

A network of evil has taken hold, like an octopus whose tentacles reach out both right and left. This organized evil also has a side that regenerates itself and finds room to maneuver where it has crashed. How to call this, dexterity, malediction or acrobatics? Here he is, proposing a candidacy to protect and manage the Kabul airport, for one. Should the proposal stand, he will hire the Free Syrian Army’s militias as mine sweeping donkeys, just as he did during the Libyan intervention. He will squeeze money out of his allies in order to pay these militias through private security firms that are faithful to him. Moreover, for Afghani asylum seekers, he will make a deal similar to the one on Syrian migrants. These immoral relations with the United States and the European Union are the garantors of the perennity of a single individual. He shows his appetite for the Kabul mission to the point of saying there would be no problem in terms of religious faith between him and the Taliban, despite the fact they treat Turkey as an occupying force.

And having accompanied for 20 years the American invasion under the International Security Support Force (FIAS) and the Resolute Support Force, he is now trying to make Turkey part of the conflict with a new mission in the name of NATO, while saying at the same time, “we have sided with our Afghani brothers against all these imperialistic forces”.

He is ready to go anywhere, from Syria to Libya, from Somalia to Qatar, from Karabakh to Afghanistan. The geography of his heart is vast. But when the fires implicate him directly, he shows no interest for the geography of disaster in Turkey he discriminates against! You mustn’t think that the imaginary world built on foreign lands could have real and measurable consequences. For years, Turkey has wasted its energies on obsessional desires.

He dries his back on the interior fire and looks for other blazes on the outside.
Brothers, sisters, hold on to your sanity!

Turkish investigative reporter and chronicler, he has written for Radikal and Hürriyet and continues writing for Al Monitor, Turkey Pulse. He was animator of “Sınırsız” (without borders) on IMC TV, a television network banned and shut down by the regime. An excellent analyst, he specializes in Turkish foreign policy and matters relating to the Caucasus, the Middle East and European Union. He has written several books, notably “Rojava: Kürtlerin Zamanı” (Rojava: the time of the Kurds), a forbidden book… He is also the founder and chief editor of the Caucasus Agency. On Twitter: @fehimtastekin