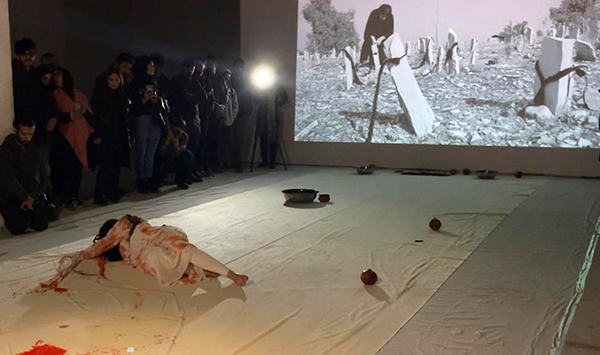 Zehra Doğan is currently in Kurdistan and visibly, resourcing there. The following images show the powerful creative energy animating her on “her lands” as she likes saying and writing.

Surrounded by artists in her own mold, by women who precisely “on these lands” are animated by a will to struggle that the Kurds describe under the term jineology, she participates in debates, renews links, exchanges and creates.

Every day becomes a day for creation in the open sky workshop of Kurdistan.

She was invited by the Kurdology Center of Sulaymaniyah in order to debate on Art and women’s expression. This same center allowed her to realize an artistic performance, organized by the Jineology Research Centre, in the premises Culture Factory – Karge Kultur, formerly the cigarette factory of Souleymanieh, which lent itself well to it.

During and after the screening of a short film she realized these past few weeks, a short on “the murder of women” that gives its full meaning to the artistic performance, she used her hair, her entire body, in order to paint with rage a large scale canvas on which she had previously made drawings.

Filmed in the Sulaymaniyah cemetery, the film’s concept is as follows:

A huge cemetery in the heart of Sulaymaniyah, a large city of two million residents: the Saiwn cemetery…

There are thousands of tombs here. In this space decorated with flowers stand intricate stelae that almost remind one of a forest.

In one corner of this huge cemetery, one zone is deserted, arid and gloomy and draws attention for this reason. Unlike the others, this part is of a macabre sterility. This contrast give the feeling that the world after death can also be paved with discriminatory stones. As if this earth, silence and grey, was in mourning.

The sight of this piece of land where close to two thousand remains are buried, as if thrown side to side randomly, helter-skelter, saddens the heart. The identity of the persons buried here, in this space both solemn and sinister, is unknown. These tombs, each the size of a small child’s casket and which are spread out in a disorderly way, belong to murdered women. Some tombstones carry numbers. A few rare ones are colored, as if painted later or secretly by a close one in order to find it again. Most of them carry no sign whatsoever. But they all share one thing in common: none of the stones bear the name of the deceased.

Rauf the cemetery guard is the one who knows this place best. “Some of them, I buried with my own hands. Some were found murdered on the street, the bodies of others waited for months at a morgue. All of them women, none of them identified,” he says. There are also tombs that belong to women who were buried at night by their murderer…

This cemetery is in Sulaymaniyah but there are others also in Hewler and in several other towns in Irak. And authorities in Irak and in Southern Kurdistan have no reactions to this situation…

The artistic performance that accompanies and completes it was thus named by Zehra “the earth’s mourning”.

It is a denunciation of unpunished feminicides.

Meeting up with Zehra Doğan will be possible in many ways during the first trimester of 2021. In Germany, Berlin’s Maxime Gorki Theater will hold an important exhibit mainly of prison works and the originals of a graphic novel created clandestinely, and already presented at the XIth Biennial. Milan’s Contemporary Art Museum will take up the major part of what was exhibited over a long period in 2020 in Brescia’s Museum.

The graphic novel itself, titled “Prison n° 5” after the gaol of Diyarbakır (Amed) will be published by Editions Delcourt in the weeks that will follow.

The “prison writings” “Nous aurons aussi de beaux jours“, published in French by Editions des Femmes are still available in bookstores and will also be available shortly in an Italian version.

Zehra Doğan tirelessly continues placing her notoriety and her Art at the disposal of the Kurdish struggle with her main powerful contributions going to women’s struggles. She cannot conceive of her freedom otherwise…