Roboski • The sole survivor to the massacre bears witness 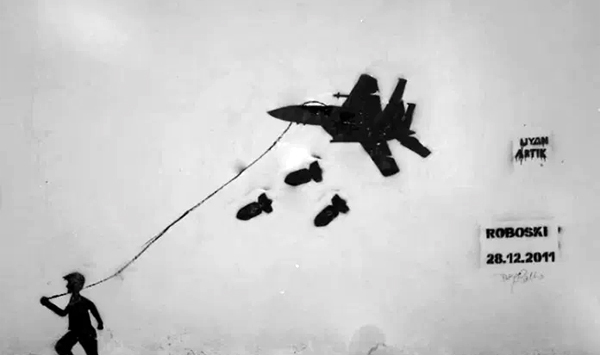 On December 28 2011, F-16 fighter planes rained down bombs on Roboski, a village bordering on Irak in the Southeastern part of Şırnak with a Kurdish majority. A veritable massacre… The bombs left behind dismembered bodies in which the families could not identify their relatives. A total of 34 civilians were killed, including 19 children.

The sole survivor to the Roboski massacre:
“I will tell everyone, from the wolf to the bird. Everyone must know”

In Roboski, the pain has been ongoing for 9 years. Servet Encu is the sole survivor to the massacre.

Exactly nine years have gone by since the death of 34 persons, most of them children, following bombings by fighter planes on Roboski, Uludere district in Şırnak. The families’ judicial fight has been exhausted following the negative decision from the European Tribunal on Human Rights. Nonetheless, the families continue calling on the authorities and asking them to listen to their conscience. Servet Encu, 41, father of six children, is the sole survivor of the massacre. He narrates… 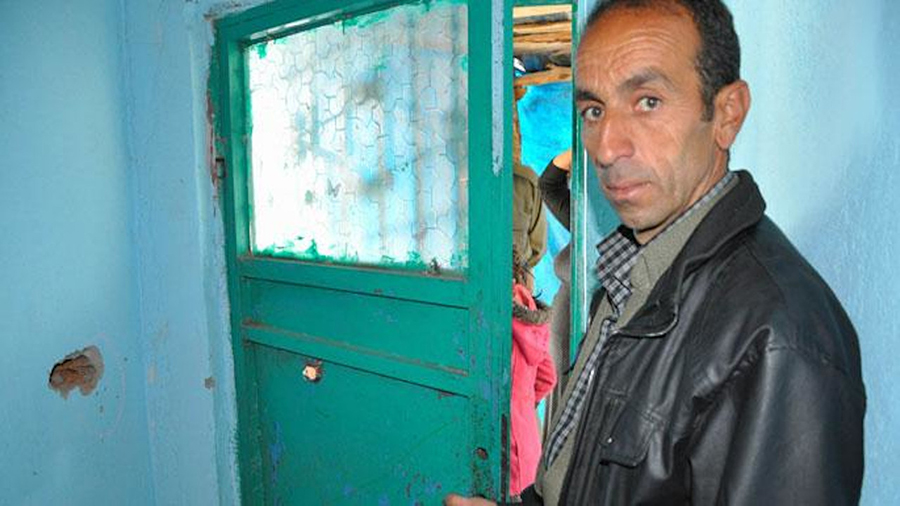 “That night, everything had become different”

Servet Encu explains that, at the time, movements back and forth across the border were free and that the villagers had set out to earn 150 Turkish lira. “We left our homes at 3 PM. Everything was as simple as going from one village to another…Before that, half of our villages, our fields were on the Iraki side. It was so simple. Like going to our village, to our fields…We picked up our loads at the border. That day, we were carrying oil and petrol. We loaded them on the mules and started on the way back. Everything was normal up to the half-way point. All of a sudden we heard a noise. At first I thought it was a mortar shell, that happened at times. But this time, there were bombs, raining down on our heads. I called our families. That night, everything had become different… The bombs were soundless when they fell from the sky but light burst out from them. Everywhere, everything was lit up as in daytime, and then we plunged into darkness…”

“The bombs rained down on us”

Servet Encu was lucky because he was at the very front of the group. In no time, his friends his relatives were killed by the bombs: Encu continues: “So the bombs started raining down on us, lighting up the sky. It was so silent, I didn’t hear a sound. A bomb landed close to me and I fell. I thought I would not stay alive. I started yelling “flee!” And looking around me, I saw pieces of people and of mules flying everywhere. I let myself slide down the cliff. Then I pretended I was dead. They stopped sending bombs on the spot where I was then.

I waited like this for two hours. In the cold, I was about to freeze. I waited like that, on the snow, as if I was waiting for death. Later, I saw the light of approaching lamps, I heard the singing of a lament… That’s when I realized I was going to be saved.

When I opened my eyes, I saw all the bodies scattered on the snow. One of the villagers noticed I was alive, and they got me out of there.

I heard a voice saying “he’s dead also”. I saw my companion. She was close to me. When she saw I was alive, she howled “my brothers!” Her two brothers were dead.

It was like the Judgment Day. On the snow, uncle and nephew, son and father, brothers…Mostly children. They were probably going to study, to become engineers, doctors. They had taken the road for pocket money. May the god not impose this on anyone…” 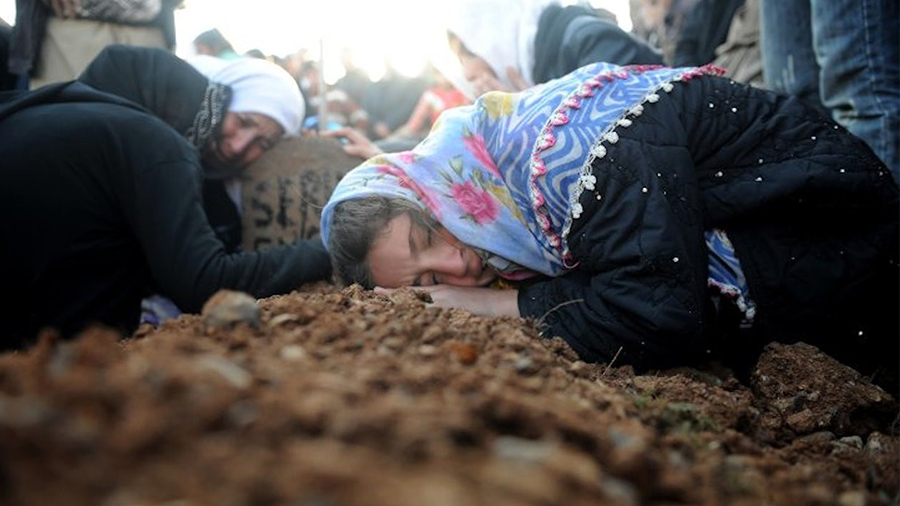 “Roboski. So everyone will know”

Servet Encu lost eleven people from his family in Roboski. “I will never be able to forget the pieces of people and of animals in the sky”, he says, and adds: “They killed us, all right… Us, human beings, we could talk, we could defend ourselves. And the mules?… They have no language. Why did they kill them?

Now, when the snow falls, I can’t experience any joy. When I hear a plane flying by, I jump, I wonder who will be killed this time. No, I haven’t seen a doctor…

The morning after the massacre, I asked myself why I was not dead. I think the god wanted a witness to remain. I cannot forget and I will make sure that no one forgets. I will tell everyone what happened. From the wolf to the bird, everyone…To everyone with a conscience. So that the world will know what happened in Roboski.

We had a can of petrol and a barrel of oil. Now I ask: why did you kill us? If we had committed a crime, arrest us, put us on trial. But why kill us? You who would not even let a 13 year old child go out alone for groceries. Would you ask yourself why a child that age would get involved in smuggling? I’m addressing myself to those who made the bombs rain down: Why don’t you put yourself in the place of the mother whose heart you burned by slaughtering her child, and talk with her. Then, take into your arms an animal’s little one…Do the accounting with your conscience…” 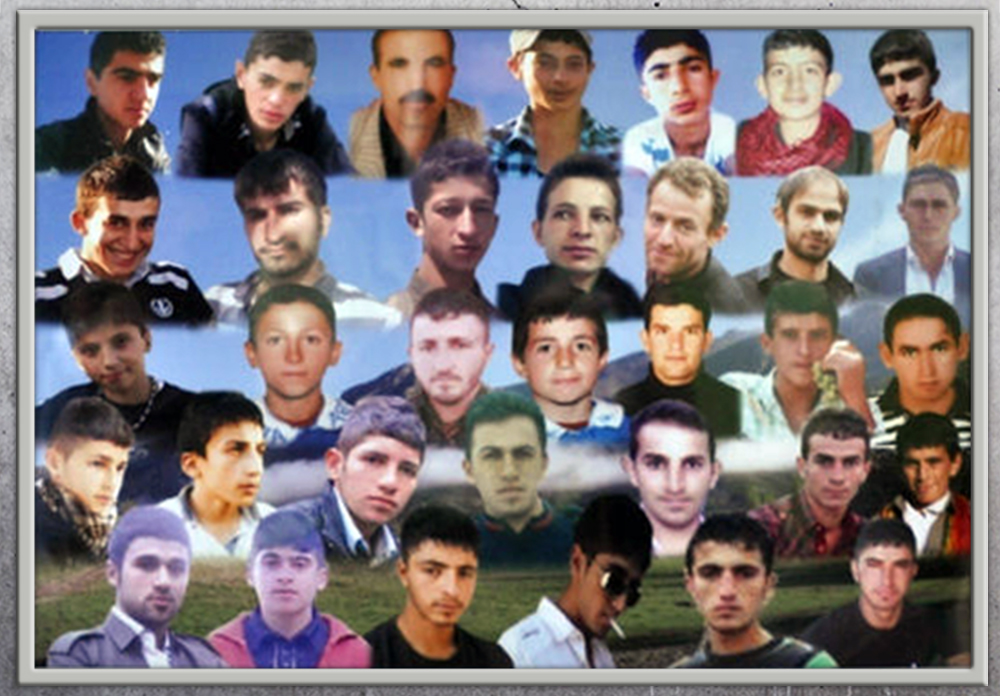 Every year on the anniversary of the Roboski massacre there are articles, declarations, photos, videos and drawings paying tribute to the victims.

But these acts of war against civilians, always targeting a specific population, are so common that the history of the peoples in Turkey are staked out by them as if the State of Turkey needed to mark its domination and the respect of order through acts of barbarity and savagery. In a bit over a century, this Republic , not yet one hundred years old, has buried a genocide, pushed down populations, committed or had others commit pogroms, has built its foundations on the blood of the ones against the others.

Each mass murder, each destruction or exaction, whether denied or claimed by the State, builds up in the memories and family histories. When, in addition, the evidence of crimes is negated, as is still the case for Roboski, all the way to the very diplomatic European Tribunal, resentment builds up.

One January in Paris, three Kurdish activists were assassinated. In this case also, after 8 years, the designated assassin is dead, and the Turkish State will never acknowledge sponsoring the crime despite evidence of the implication of its “services” in its external war against the Kurdish movement.

And all the gesticulations of French and European governments in front of the Turkish regime contradict one another and cancel themselves out when justice is constantly violated.