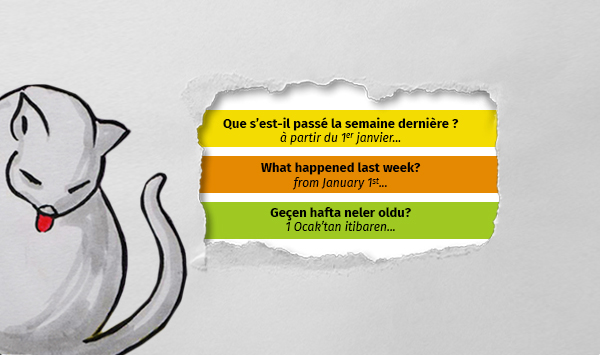 Starting on January 1st, Kedistan your webzine will be offering you a factual summary of weekly news.

You will find them on the site’s front page, as well as in your email if you are a subscriber to the weekly newsletter, or if you subscribe using the form shown below.

From the start, Kedistan always attempted to follow the burning daily news from Turkey and the Middle-East. Especially during the period of the curfews in the Kurdish towns , at the end of 2015 and the beginning of 2016, the team attempted to keep its readers informed, thanks to the determined efforts of journalist friends, contacts and activists on the ground. This gave rise to precious parnerships with various groups such as Merhaba Hevalno, media such as Ronahi TV for weekly bulletins in French that were interrupted unfortunately, creating a real void following Ronahi TV‘s forced withdrawal from Eutelsat under pressure from the Turkish regime, followed by the move to their premises in Sweden…

Experience showed that this daily tracking down of information is not an easy task, humanly exhausting, especially when it involves a small team of volunteers, be they journalists or not, who consider themselves duty bound to produce quality information for free…  Luckily, in the past few years, several new media, such as Roj Info, have sprung up doing a fine job. This is why, some three years ago, the kedi decided to concentrate on articles focusing on analysis or materials for archiving, and to travel a common road with friendly media covering daily information, by sharing it. This means spreading-sharing their publication to give them more visibility, rather than multiplying sources treating the same topic in a similar way, or worse yet, competing by publishing cut-and paste versions. As a reminder, the perverse aspect of Internet, especially of social networks, means that the more a publication is shared away from its source, the more visible and the more shared it becomes. So sharing the work of our colleagues is more important than diluting it.

However, at the request of our readers, in this new year, Kedistan will offer a weekly summary of not-to-be-missed information.

The team extends special thanks to colleague Dilek Aykan who will take on responsibility for this demanding and time-consuming work. And so, a new weekly rendez-vous is in store…