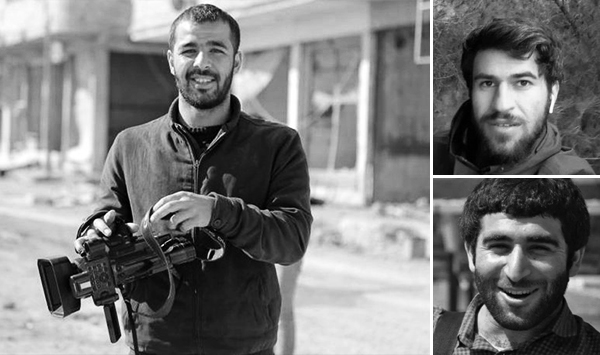 Sentenced to prison following an absurd and relentless trial, the Kurdish journalist Nuri Akman was forced to leave Turkey. On the night of November 19, Romania attempted to expel him, despite his request for asylum, along with some fifty other migrants, including two other Kurdish political refugees. 35 of the 50 migrants arrested during a police raid on a Timisoara hotel were expelled. The expulsion of journalist Nuri Akman, of Kurdish political figures Lokman Çoşkun, Serdar Bilgiç and of two other Kurdish asylum seekers from Turkey was interrupted at the last minute, because of the resistance of the ones concerned but also thanks to a chain of solidarity that was activated rapidly and which proved effective.

In March 2019, journalist Nuri Akman went up before the judge for the first time along with his colleague Erdoğan Alayumat, both accused of “treason and espionnage” along with “belonging to a terrorist organization”, for having photographed a residence suspected to house headquarters of the Turkish intelligence (MIT). The tribunal’s verdict was both an acquittal from these accusations and …the re-opening of a new inquest for the same motives… This new trial ended with the pronouncement of a sentence of 6 years and 3 months in prison. The Court of Appeals annulled the decision. In 2020, a new trial was opened, always on the same grounds, and a first hearing was announced for November 21. An order for Nuri Akman’s arrest was dispatched. Faced with such relentlessness, the journalist was forced to leave Turkey…

Nuri Akman managed to reach Greece and filed a request for asylum there. However, in the context of the country’s ongoing economic crisis, conditions for asylum seekers in Greek refugee camps are extremely difficult and aid terribly limited. Devoid of a work permit, facing a delay reaching two, three, or even four years, becomes untenable. Nuri Akman then attempted to reach another European country. Along with other Kurdish migrants, including Lokman Çoşkun, Serdar Bilgiç, he passed through Macedonia, then Serbia before arriving in Romania.

On November 13, following a police operation in a Timisoara hotel, 50 migrants were arrested. Security forces held them for 6 hours in the cold in front of the hotel, hands cuffed behind the back.

They were first taken to a detention center near Timisoara where they spent 2 ays without food or water. They were then transferred to a retention center in Arad. According to the testimony of those migrants we could contact, “a long trip with hands cuffed in the back” was followed by body searches.

Y.S., one of the young Kurds who was expelled, testifies: “First they took us to an Interpol center, where they kept us waiting for a few more hours, handcuffed in the cold. Then, for two days, we were held without food or water. Our requests for a lawyer were denied and the asylum request we had filed did not appear in the system. What’s more, a translator threatened us, saying “you are going to be killed”.

After two days in this place, we were transferred to a retention center in the town of Arad. It was like a prison. A building with tiny cells. There, they locked us into cells and tortured us with truncheons. It is an inhuman treatment. We could hear children’s voices in the lower storeys. There was also a young minor of 17 years.

Four days later, the Romanian authorities told them they would be transferred to a camp in Bucarest: “We set out in the morning, and it was only when we arrived at the terminal that we understood we were at Bucarest airport. They had lied to us”, testified some of them… S.Y.’s version confirms this: “On the morning of November 18, they told us they were taking us to another camp in Bucarest and had us climb into a bus. When we arrived in the evening, we were at the airport.”

All of the 35 people were forced to board the plane. Some of the migrants, still in possession of their identity papers, were refused the right to request asylum for this reason. Some boarded the plane. Five of them resisted: Nuri Akman, Lokman Çoskun, Serbest Derin,, the young Y.S. and an old man. Y.S. continues: “Despite the fact that we were telling them we wanted to request asylum, they put us aboard the plane. The old uncle and I had our identity papers, so they used violence to force us aboard the plane.” Suffering from chronic illness and given his age, the old man could not resist any longer and was put aboard the plane. As for the young Y.S. he says: “Someone hit me on the back of the head, I fainted and when I came to, I was on the plane.”

Nuri Akman, Lokman Çoskun and Serbest Derin took the risk to go on receiving blows and to continue resisting. At the same time, informed of these happenings, a number of colleagues reacted, communicated the news and denounced these occurrences of violence in Romania on social networks: with ongoing request for asylum, that cannot be sent back to Turkey. Their expulsion is totally illegal. A lawyer was expedited to the airport, but he was not authorized to see them, nor given any information.

This morning, we learn that Nuri Akman, Lokman Çoskun and Serbest Derin have been sent to a retention camp near Bucarest. Thus, they are together and in good health. Their request for asylum will be processed by Romania.

In other words: to be continued…

“A person requesting asylum is a person who claims to be a refugee but has not yet obtained this status in the country where he or she request to be welcomed”. This is a definition recognized by Romania, a State under the rule of law, member of the European Union. This being the case, it is bound by the conventions it has signed, even if the text relative to the right of asylum (Law 122/2006, art. 4) has been modified. Romania is not a country of the European Union experiencing a particularly heavy influx of asylum seekers. Very few migrants remain on Romanian territory.

In order to obtain refugee status in Romania, the persons requesting asylum must first undergo an administrative period involving the analysis of the personal file along with individual interviews. If the asylum request is denied, they may undergo a judiciary process for the evaluation of their situation by the proper authorities. During this evaluation process, asylum seekers are sheltered in residences and receive medical assistance along with a monthly allowance of approximately 30 euros – an amount largely insufficient for a decent standard of living: they are not allowed to work.

One measures the extent to which the “texts” diverge from the practice, in Romania as elsewhere, and especially the illegality of practices refusing to instruct the request and proceeding to forceful expulsion, as was the case.

The identitarian tensions in the European States that have led to the closing of routes for exile, at the cost of tens of thousands of deaths, and that have handed part of the keys to the Turkish regime, lead to the lack of respect of all commitments made in the Geneva Convention. This EU negates its own “founding values” and as it puts forward “the migratory question”, continues to do business with the purveyors of war and misery at the origin of exiles.

Top photo: Nuri Akman on the left, on the right from top to bottom, Lokman Çoşkun, Serbest Derin.