Ah, children, think… a bomb bearing your own name 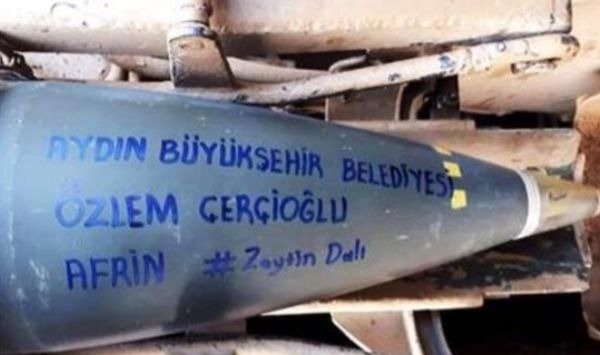 In 2018 – in order to leave her mark on history she said – Özlem Çerçioğlu accepted to have a bomb targeting Afrin inscribed with her name as Mayor of the town of Aydın (between Izmir and Antalya).

Her Facebook page still carries the following comments along with her thanks: “I have no doubt that our Mehmetçik fighting for the integrity of our lands will succeed. Throughout history, our glorious army has always delivered the necesssary lessons to those who attempt to take our lands. Our prayers accompany our hero Mehmetçik (the little Turkish soldier)“.

Other than the fact that the land in question happened to be officially Syrian and, mostly, one of the historical enclaves of the Kurdish majority in Northern Syria (Rojava), now in the hands of militias armed by Turkey and currently committing crime after crime, one notes that the lady did not hesitate to drag her electorate into it. She then had part of one of the boulevards in her town re-named “Olive Branch“, the official name of the occupation offensive led by the Turkish army at the time.

Since confirmed in her position as Mayor, she was named President of her party’s council for its National Congress, in recognition of her loyal services. This 2018 dedication on the bomb is still of current interest and she is still proud to claim responsibility for it. The official excuse for honoring her with the presidency was supposedly because she is a woman and, given the heavy load of violence against women in Turkey, this seemed called for. Does the dedication also hold for the women in Afrin, some of whom were kidnapped and raped by the militias?

No, we are not talking here about an elected member of the presidential party, the AKP, but of one of the popular elected members of the CHP, the one so many people across the world still attempt to describe as a secular leftist party in Turkey and…a possible replacement. How much longer will these journalistic jokes go on?

At its Congress, this same Party reappointed its old historical leader, Kemal Kılıçdaroğlu, with the eager congratulations of the lady presiding the event. Kemal Atatürk will be under safekeeping, under the sacred bonnet! This beloved leader sometimes argues with Erdoğan, but he’s always there “for the threatened republic”. We would like to know the list of “European fraternal parties” represented at the Congress. We might be quite surprised.

Of course, on the same social media page of this Kemalist elected member, one finds a glorification of the Lausanne Treaty and its negotiators. This Treaty, need we remind the reader, effected new boundary changes to the current Turkey within the region and buried every possibility of recognition for the existence of territories with a Kurdish majority, as well as Armenian or Greek populations, needless to say. In short, it proclaimed the notion of exclusive Turcity.

Even the permanent ambiguity that leads to classifying this CHP party as an “opposition party” when, in fact it is nothing more than an alternating opposition in Parliament and in the State institutions, had not accustomed us to seeing its elected members signing bombs aimed at women, men and children on Turkey’s Syrian borders. With no one in this party finding anything to say about it.

Try convincing us now that the fact of renaming the basilica-museum of Hagia Sophia as a mosque is the most important topic of the hour.

And even if this story about the bomb is “old business” and she is not the only one to have dedicated a bomb, let’s get back to the motivations for a moment.

Sabiha Gökçen, Mustafa Kemal Atatürk’s adopted daughter, was a female pilot and in 1937, she took pride in the fact of having participated in the killing of tens of thousands of Kurds during the Dersim massacre, another dark and blood-filled page in the history of Turkey’s Kemalist republic. Özlem Çerçioğlu probably doesn’t have the same skills as a pilot, or else she would have delivered the bomb with the satisfaction of a duty accomplished in homage to the past and to its current “heros”.

If some people were moved at the last municipal elections with the victories of the CHP in Istanbul and Ankara, and even if the HDP – sole opposition party legitimalety carrying this label of true democratic opposition – contributed electorally to these set-backs for the regime, the day will come when the curtain must be lifted on the supposedly secular , republican , social and democratic opposition represented by the CHP in Turkey. There is nothing there but the complicated continuity in a Kemalist political block, quite satisfied to pursue with no qualms the –Turco-Islamic synthesis, intent only on sharing institutional powers it may wish to see exercised with less personal glorification and resting less obviously on the ultra-nationalist wing, with a more discrete repression, without in any way questioning the Republic’s trajectories.

One can thus introduce one’s self as the “party for peace”, hold demonstrations on occasion, with an olive branch in hand, while being as militaristic as the next person, as rabid a nationalist, a negationist and a killer of Kurds by proxy. And that, in a nutshell, contains the whole complicated history of Turkey.

Having a bomb carrying your name: the last time we read something of the sort, it was about traditions in wartime aviation, for Guernica, London, Dresden and Hiroshima. Nothing but the finest of memories.

PS: Can someone inform the lady her bomb was delivered?

28.07.2020 – New Turkish massacre in Manbij | Rojava Resistance
Last night, when a drone had just flown over the Arima region, the localities of Kurt Wiran and Yalani were bombed by pro-Turkish jihadists. The death toll was 6 dead (mainly children and a woman) and 6 seriously injured (mainly children). The Military Council of Manbij indicates that the 12 victims are mostly members of the Diyab family.

The injuries of Mehmud Diyab, 7, and Ehmed Diyab, 12, required emergency surgery. Their prognosis is still life-threatening.

No state condemns this new war crime committed by Turkey.