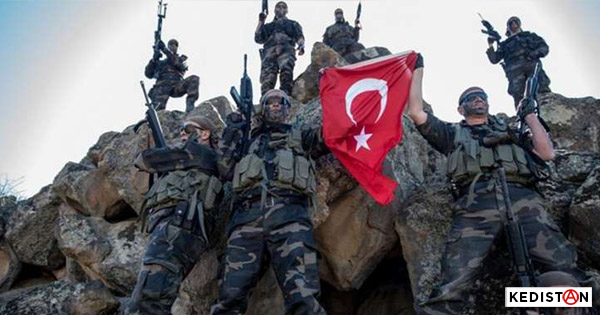 My words may not matter but I cannot stay silent about this war, conducted, apparently, to “defend the national borders“, and in which we see the Reis’ accomplices allied, once again, with the senile Kemalists against the Kurdish populations.

Apparently, one risks imprisonment for protesting against the massacres in Afrin.

Our Prime Minister even recommended to his rags that they publish nothing but official information, filtered and authorized. I think this advice was even followed by some international journalists.

Yet, I hear close to two hundred intellectuals, artists, and even politicians have taken the risk of publishing a slightly more personal text yesterday.

“Stop the war” they say, or again “send you own children, if you’re so enthused about it”. You once had I poet, I think, who said the same thing a long time ago ” war is such bullshit“. I found those words fairly harmless. But your Prévert would already be in jail for writing them down… Only 170 people dared to sign the protest. Maybe because they remember the academics who said the same thing over a year ago and who go on saying it from abroad, or from jail, or while desperately looking for work…

Ah, as an opponent, it is much easier these days to shout” hail to the defence of the nation’s borders” under the protection of Kemal’s bonnet, than to say “down with war”!

The gentle dove is in her sixth day of operations nonetheless and that children’s bodies are scattering under Turkish bombs bearing olive branches…made where, by the way? Stupid me, there I was thinking that a Turkish plane taking off from a NATO airbase needed authorization…and  another from Putin in order to fly over Syria. But we’re not under ISIS anymore, that’s true… Alliances have changed. I’m getting old!

I was reading elsewhere that this war was designed for the interior of our country as well as for the outside world.

For Afrin, the question of “how far “, “how many dead “, “until when” were raised in order to eliminate a part of the table from the future Middle Eastern negotiations. The only good Kurd that will be welcome  will be a dead one. The limits will depend on the resistance, on tacit or open support to our Reis, and on international silence. Ever hear of Sotchi? No, it’s not the name of a game.

On the domestic front, we know the regime needs this war to prepare future electoral recompositions that will allow the President a chance at a grand slam. Decay attracts death.

No doubt you would like a few excerpts of this mail adressed to the deputies?

“Experience has taught us that our security is guaranteed by the billions of dollars in weapons, negotiations and mutual collaborations, and not at the cost of young lives and of a war that will leave tens of thousands of families without shelter…The Kurdish citizens are not a threat for peace and security”.

In the past decades, it has become fashionable in the media to accuse “the organization” of child murders. Progress toward the Turkey of 2023 means we now kill with modern planes, in these, the ordinary times in the State’s regular agenda.

The real text, translated by ANF-English

We the undersigned citizens call on you in the name of millions of our fellow citizens due to the authority and responsibility you hold.

We want peace and quiet in our country and region, not war. We believe the best way to protect our borders and avoid survival problems is through reciprocal friendship and strengthening good neighbor relations. We know by experience that our security won’t be achieved through an arms race that costs billions, at the price of young lives and with a war that will displace tens of thousands of people, but through bilateral negotiations and cooperation, and we know that this is possible.

We also know that an armed intervention on Afrin, which poses no threat to Turkey and is part of Syria’s territory, will not bring peace and security to our country and our region, but rather bigger problems and more destruction and pain, and that it will create deep wounds in the hearts of our Kurdish citizens.

Even the military presence of foreign states, who have turned the Middle East into a proxy war hell, is a violation of international law, but an intention to join them and steps taken in this direction will only create disappointment for our country, and cause irreparable social, political, economic and humanitarian losses for decades to come.

With our identity and responsibility as citizens, we are warning you who hold the authority in front of our people and history to heed our call, act responsibly, immediately stop the war and resolve the issue through dialogue.