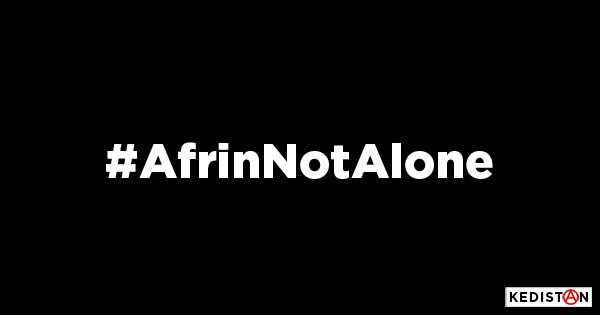 Disinformation has already begun concerning the attack on the district of Afrin in northern Syria. Sacrosanct journalistic objectivity would have it that information does not take sides. In that case, what do you call using Erdoğan’s language and sources?

“Turkey is going after the Kurdish self-defence militias of the PKK on its Syrian border… We remind that the PKK figures on the European list of terrorist organizations… bla bla bla” or again “ Turkey defends its frontier against the Kurdish threat…”. “This region located on the frontier between Turkey and Syria is dominated by the Kurdish militia of the Party for Democratic Union, considered ‘terrorist’ by Ankara”, writes a colleague from Le Monde today, Sunday. I must pause on this for a moment.

I don’t know why this article in Le Monde radiates the sort of fragrance that reminds me of the dismissive condescension Kemalist White Turks long conveyed to their lowly staff out of deepest Anatolia. Have Kurds, now that they have even been dismissed in a majority from driving the yellow cabs and relegated to acting as porters on the markets, have they become such pariahs that a French journalist must affix to them the label of “considered as terrorists” in every article?   Putting the terms in brackets does not change their meaning. Especially when, in this same article, she cannot keep herself from relativising the improvised demonstration of support in Kadıköy, on the Asian side of the Bosphorus, she adds immediately, no doubt to show she knows the area well. Yet, quoting as her source Yeni Şafak, the national rag, or Anadolu, the official agency (his Master’s voice), does not show remarkable objectivity since it is the voice of the agressor. In short, refusing to search out sources in the Kurdish movement leads to serving Erdoğan in his disinformation policy or to purring meekly to what the Macronian leadership of her paper wants to hear…Ah, Marie, if only you knew… But it is also true that the Kemalist CHP proclaimed last night “we are behind the operation in Afrin”… On this last and in closing, I will also plagiarize Erdoğan “Ô World, what are you saying about our Turkey?”

In Turkey, the allied media rally round the notion that the operation is “to defend the Nation“, and the fight against terrorism on the Nation’s frontiers wins the day, thus justifying the outstanding 2018 war budget, validated by a docile Parliament.

For this Turkish offensive called “Olive Branch” is an extension to the previous irruption of tanks in Jerablus, in the backs of the fighters of the Syrian Democratic Forces and the YPG among them who were carrying out a full offensive against ISIS and progressing toward a now liberated Raqqa. Using, as usual, all means at his disposal, Erdoğan pulled the notion of a “buffer zone” in Syria out of a hat, in order to maintain an open corridor and prevent at all cost the linking of the cantons in the federal part of Northern Syria. Sometimes by offering to the coalition the possibility of settling refugees there, sometimes by arming militias he had formerly thrown against Assad – and which he now wants to turn against the democratic federation, now much enlarged from the initial Rojava.

Everyone knows that, in the midst of this geo-political entanglement where regional and imperialistic interests intermingle, the support of international predators does not flow to those defending a project that would strengthen an autonomous governance resting on a real collaboration between all the various components of the Mesopotamian mosaic, and beyond.

In the eyes of powers with hegemonic views, in order to maintain mastery over the riches of fossil energy and the military and political beach heads they require, better today a Bachar or an Erdoğan – or, if need be, their autocratic and authoritarian successors – than a peace project based on the political collaboration of the peoples in the region.

Iran, Arabia, Turkey, all speak in turn with their allies and Occidental providers. With ISIS now mainly vanquished on the military front, thanks to  “Kurdish cannon fodder”, the time has come to move on to the great sharing of spoils at the table, and this calls once again for the need to get rid of the political project born in Rojava so as to put down, yet again, the entire Kurdish autonomy movement.

The unfortunate 2017 referendum launched by Barzani in Irak, the consequence of which was a return to the 2003 borders for the Kurdish entity in Irak, had already leagued all the international forces against the Kurdish movement. The second phase, carefully prepared by Erdoğan in full view and with the full knowledge of all, is now underway with Afrin.

In principle, the Russian forces control the air in this region, in collaboration with anti-ISIS coalitions. Yet the bombings by the Turkish air force seem to be carried out, and to continue, with no apparent prohibitions. Trump has lost his phone…

And then, the Occidental powers appear. As a unified choir, they call on “acting with restraint”.

Nice and easy does it… Please… “Kurdish forces fired several rockets against Reynali, the Turkish town in the region of Hatay on the other side of the border. One person was killed and 32 wounded were admitted to the hospital in Reyhanli, according to the town’s mayor,  Hüseyin Şanverdi…” (source Le Monde). Giving figures for the Afrin side would be propaganda, so I will abstain from doing so.

French news stations are on minimal service for the time being, relaying the information as sub-headings after the sports pages.

We can expect disinformation in which the notion of the Good Kurd opposed to the Nasty PKK will be the rule. During the massacres of the past two years in Turkish Kurdistan, the deaths of civilians were relayed as caused by “self-defence militias” in the “lost battle of the PKK” according to this same World source…

At one time, Kobanê was the symbol of the first victory against ISIS and provided strength to the project in Northern Syria. Erdoğan wants Afrin to put an end to this promise for the future. Kurds, Assyrians, Arabs… refugees… the defenders of the freedoms in Northern Syria, those who vanquised ISIS need urgent support, beyond the vague negotiations of the Security Council. They deserve self-defense, without being taxed of terrorism…

When faced with such emergencies, I do not say hail to you, Marie…