Afrin • The cry of the olives: “Put an end to the Turkish occupation in Rojava!” 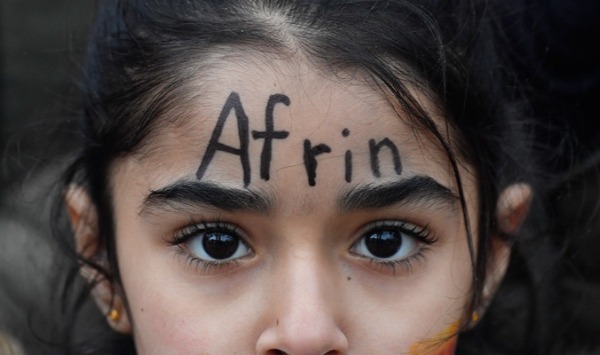 Our friend Gulistan Sido sent us this message from Rojava along with the press release she signed also. At her request we share this in all urgency and invite you to relay it as widely as you can through your own networks.

Several Kurdish academics, writers and public figures have issued a statement on behalf of the thousands of Kurds still in Afrin and the hundreds of thousands forcibly displaced in the camps.

Here is the press release:

Afrin to the world:
PUT AN END TO THE TURKISH OCCUPATION IN AFRIN – SYRIA/ROJAVA!

The occupation of Afrin has entered its third year with no clear-cut horizon to the end of the catastrophy or date for the return of the native population in their homes.

Hundreds of thousands of persons forcibly displaced are still scattered across displaced people’s camps, villages and the towns of Al-Shahba, Alep and other Syrian districts and restrictions continue on those families remaining in Afrin. Considering that the question of Afrin determines the fate of all Kurds in their current situation and their future, and that it is an integral part of the Kurdish question in the Syrian solution process,

We strongly associate with the appeal of the FDS that the political forces join ranks, beyond attitudes of courtesy and blessings, and take on full responsibility before the Kurdish society.

The feeble voices of our families in Afrin tell us they have become hostages in their homes and villages and they call on what is left of human conscience in order to save life in its most basic form.

A genocide is underway and a end to existence, for every form of violation and aggression is practiced against them, such as murders, kidnappings, forced arrests and demands for ransoms, and no one can tell how many headquarters there are charged with security, how many special detention centers, nor what goes on there, while a number of violations and their symptoms are covered up.

Today, the native people of Afrin can no longer allow themselves to walk in the streets or to stay at home, since occupations with the expulsion of owners are carried out constantly.

Today, it is demanded of all Kurdish political and intellectual forces, of all educated cadres with different intellectual orientations to take up a firm position and to leave the circle of theoretical discussions in order to answer before the people inside Afrin and in the camps and displacement zones, to the direct question of the fate of the people of Afrin, and to find means to put an end to the occupation and to the violations against them. This is their essential mission insofar as they consider themselves representatives of the Kurdish question, and no form of compromise or justification to further procrastination will be accepted.

Signatorees to this communique demand that “the question of Afrin and of the other occupied zones be considered an absolute priority and that a clear work plan and road map be formulated to end the Turkish occupation, insure the dignified return of people forcibly displaced, clarify the fate of the thousands who have disappeared, work for the liberation of the detainees, bring to justice the authors of violations and offer equitable indemnizations to the victims’ families.”