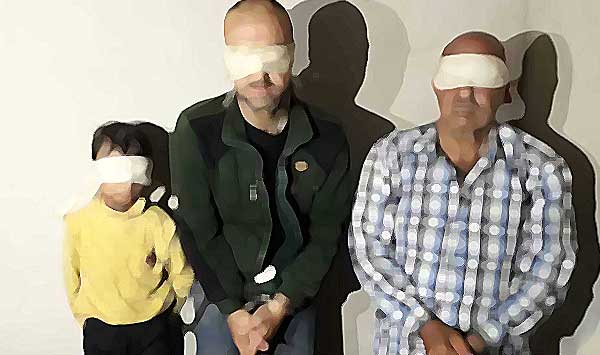 The arrests target both men and women who are sometimes held against ransom. Kidnapping against ransom has become a very popular business with the factions, aiming to collect as much money as possible and to repress the population remaining in the towns in order to force them out of the region. The Syrian Observatory for Human Rights (SOHR), based in London, has documented the fact that the factions transferred kidnapped persons into detention centers, seizing their homes with some of them transformed into headquarters for pro-Turkish factions sharing the zones of influence in Afrin.

Over 6 000 people have been kidnapped for ransom.

The Syrian Observatory for Human Rights (SOHR) says it has documented at least 3 000 cases of kidnapped persons transferred into “hostage quarters and secret jails” and that 2 090 of these kidnapped persons are still detained or reported as disappeared.

The detainees are tortured and beaten, their relatives being pressed to pay for their liberation.

The kidnappings have become “a way to make money” says the SOHR.

Several of the victims are transferred to the infamous prison of Al-Raai or in Turkey itself.

On more than one occasion, the SOHR has noted that the factions send the families audio or video clips of the kidnapped persons, blindfolded and tortured under threat of a firearm, demanding an enormous ransom immediately, failing which the hostages will be shot or decapitated. Persons already reduced to poverty have no other choice than to call on their relatives and acquaintances in order to scrape together the amounts demanded of them.

The ransoms can reach $100 000. Often, as several cases demonstrated last May, several members of the family, including children, are kidnapped and a ransom is demanded against evidence of the tortured or murdered body of one of the victims.

“Although victims and their families in Afrin often signal such cases to the military police, the civilian police and the Turkish authorities, this has little effect”, according to the UN report.

The horror of detention centers

The detention centers are either homes confiscated from displaced Kurds, transformed into headquarters for armed factions, or prisons managed by the Turkish MIT and Grey Wolves, in Turkmen towns East of Azaz, such as the prisons of Sejjo and Al-Raii. Another large prison can be found in the border village of Midan Akbaz, Rajo, in the extreme North of Afrin.

Detainees are interrogated by armed groups and Turkish officers. “All the questioning relates to the detainees’ activities on social media and accusations of being affiliated with the YPG/PKK/PYD”, explains Jan. H. who was detained three times in a row; every time, his family had to pay enormous sums for his liberation.

“I was brutally tortured and my father was arrested when he was unable to pay the ransom of $50 000. They called in my father and in front of him, they put a sword to my throat. I was only set free when my father managed to collect the ransom money from our acquaintances in Europe.”
There is clear evidence that some prisonners were even impaled and have now disappeared. One surviving person who was impaled and is now an invalid, received aid from smugglers in order to enter Shahba (Governorate of Soueïda, South Syria).

A look at the jails managed de facto by Turkey and the violent carceral system of its agents, reveals inhumane torture along with rapes and murders, as indicated in a series of phone interviews with some thirty kidnapped persons in Afrin who described the cruel conditions inside these detention centers as crimes against humanity.

According to the survivors, the interrogators and torturers spoke Turkish and Arabic and used a dozen different techniques of torture.

Also as part of this dirty game, the women arrested by the factions were often sexually assaulted and raped.

“Civilians and civilian infrastructures must be protected” has been the only alert to come out of the UN so far.

In view of these violations of human rights, where oh where is the rest of humanity?

Rossella Assanti, activist and freelance journalist specialized in Kurdistan issues.
She believes in truth as a means of making justice win. Travel so that his pen becomes the voice of those who are silenced.

Image: Already in June 2019… A family, including a child with Down’s syndrome, taken hostage, had been executed by armed groups.